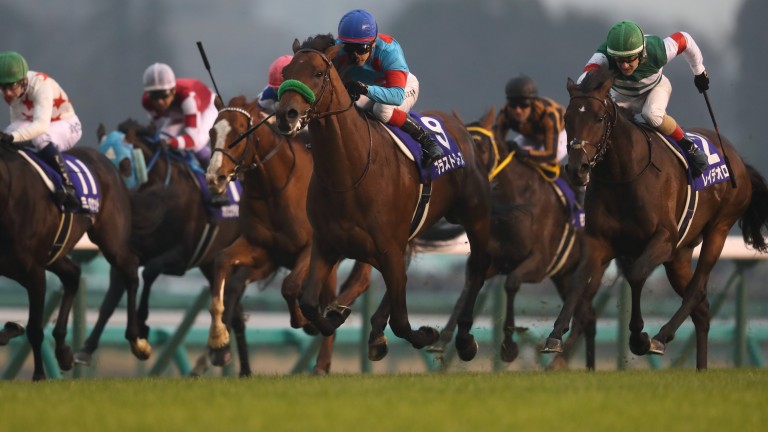 It has been a stellar year for Japan's three-year-olds, with the Silk Racing-owned Almond Eye winning the fillies' Triple Crown and Japan Cup, and Blast Onepiece, the only runner representing the Classic generation in the Arima Kinen who ran in the same silks, swooped past favourite Rey De Oro to claim the prize.

Trained by Masahiro Otake, who was winning his first Grade 1, Blast Onepiece was ridden at Nakayama by local jockey Kenichi Ikezoe, who was scoring for the fourth time in the world's biggest betting race after wins on Dream Journey (2009) and Orfevre (2011, 2013).

Kiseki set a strong pace throughout in the ¥468 million (£4.61m/€5.1m) contest on Sunday. He was momentarily challenged in the straight by Mikki Rocket, who was ridden by Oisin Murphy, and the pair were soon swamped by the winner and Christophe Lemaire's mount Rey De Oro, who had won the Tenno Sho on his previous run.

Otake said: "I've trained some horses who would be able to win Grade 1s, so I'm very happy to get over the hurdle."

Of Blast Onepiece, he said: "His condition was good and when I saw him at the paddock he looked a powerful figure. I trusted the jockey in the race, and saw he wanted to be close to the front.

"I'll decide on his next goal after looking at his condition following the race."

Lemaire cited the ground as the reason why Rey De Oro failed to pick up as powerfully as he can.

He said: "He raced perfectly. However, at the home turn the ground was bad and his response was late. The winner is out of Harbinger, so he moved well. Although Rey de Oro rushed up rapidly, he couldn't win. I think it was because of the ground and the weight."

Three-time Nakayama Grand Jump winner Oju Chosan, who was voted to run in the race by the public – the field is determined by fans who cast their votes at racecourses, off-track betting sites, by post and online – raced on the inside rail and challenged alongside Mikki Rocket in the straight, but never had the pace to get on terms and faded to finish ninth.

His rider Yutake Take said: "His condition was good and he fought well. I want to thank the fans because they meant we could contest the Arima Kinen. This was a nice try and I hope everyone enjoyed his run."

FIRST PUBLISHED 10:53AM, DEC 23 2018
I have trained some horses who would be able to win Grade 1s, so I am very happy to get over the hurdle