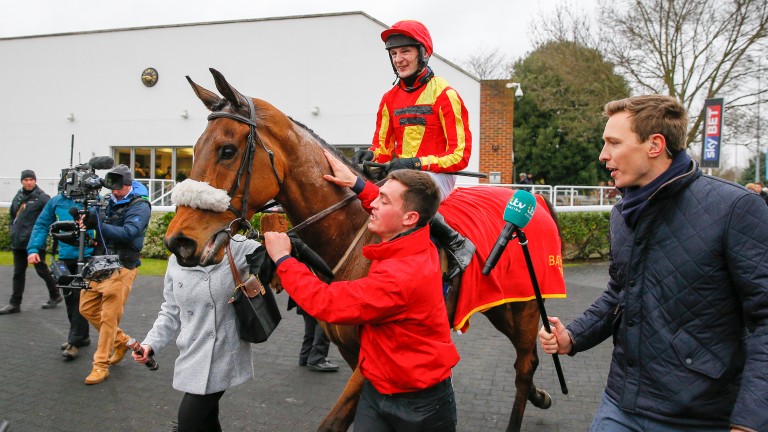 Pilgrims Bay may go down as the cheekiest winner of the BetBright Chase with jockey James Best barely needing to pick up his whip as he guided the 25-1 shot to a narrow success.

With the Cheltenham Festival just around the corner, Best's performance on Pilgrims Bay evoked memories of Paul Carberry's infamous ride on Harchibald in the Champion Hurdle with the rider remaining motionless as those either side of him gave everything they had.

Fortunately for Best, Pilgrims Bay had much more under the bonnet when the button was pressed after the final fence as he was pushed out with the minimum of fuss to score from Double Shuffle.

You would have hardly noticed Pilgrims Bay until the turn for home. The Neil Mulholland-trained seven-year-old sat out the back jumping assuredly before moving up to the heels of the leaders on the turn for home.

Those leaders were Theatre Guide, winner of the race last year, and Double Shuffle, who made a bad error at the third-last fence.

As Paddy Brennan on Theatre Guide and Adrian Heskin on Double Shuffle were pushing and shoving their mounts running down to two out, Best sat serenely on Pilgrims Bay as he moved up between them.

Best waited, we waited and Pilgrims Bay waited as the final fence approached - when would the key moment come? Unflustered, Best kicked his mount into gear over the last obstacle and the race was over.

Despite Best's efforts, Mulholland was still a little nervous on the run to the line and said: "He was there too soon today! That's what [James] said. With him you just couldn't get your hopes up because he can stop in a second. Thankfully it all went to plan.

"I'm delighted to give James a nice winner because he's a hard worker. He rides out on a regular basis and he's a good rider. Hopefully people will see that and give him more chances. He's a real nice fella to top it off too."

Pilgrims Bay carries the silks of owner Wayne Clifford, a prominent owner and sponsor in racing via his company Bathwick Tyres.

Mulholland added: "It's great for Bathwick Tyres who are big supporters of racing and me."

"This horse doesn't owe us anything and we know a good strong pace and tightly-bunched field should suit him. The Ultima [at the Cheltenham Festival] is an obvious place to go. We have The Druids Nephew and The Young Master for that but they could all line up."

Bigger targets await the second and third with Double Shuffle set to go to the Randox Health Grand National and Theatre Guide being aimed at the Timico Cheltenham Gold Cup.

Tom George said on Double Shuffle: "The mistake was uncharacteristic but he's young and will learn from it. He will go straight for the National and there's no reason why he won't go well. He's actually a brilliant jumper."

Brennan added of Theatre Guide: "It was a career best and I could see him winning a Graded race; something like a Charlie Hall. I've seen a lot worse horses be in the first three in the Gold Cup and I'd encourage them to run."

FIRST PUBLISHED 3:54PM, FEB 25 2017
With him you just couldn't get your hopes up because he can stop in a second