Jade on course for battle with Annie at Punchestown 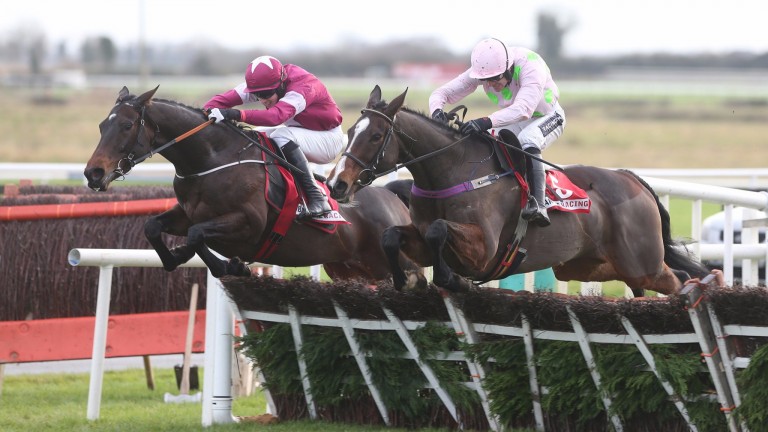 Apple's Jade (left): and Vroum Vroum Mag take the final flight together in the Hatton's Grace Hurdle
CAROLINE NORRIS
1 of 1
By Richard Forristal 9:16AM, JAN 23 2017

Apple's Jade could be poised for a mouthwatering clash with Annie Power at Punchestown after Gordon Elliott confirmed that the race Willie Mullins' superstar won last year en route to Champion Hurdle glory is a likely target for his Hatton's Grace winner.

Mullins has indicated that Plan A for Annie Power's belated seasonal bow is the 2m4f mares' hurdle at Punchestown on February 22, and provided she turns up there, she could meet rising star and ex-stablemate Apple's Jade, who short-headed Vroum Vroum Mag when subjecting that Rich Ricci-owned mare to her sole defeat in 12 starts for Mullins when last seen at Fairyhouse on December 4.

"The Punchestown mares' race is one of a couple of races we're considering for Apple's Jade," Elliott said, with the Boyne Hurdle at Navan also an option three days earlier.

"She could go to Punchestown and probably go for the mares' hurdle [at Cheltenham] after that."

Annie Power heads the betting for the OLBG Mares' Hurdle at the festival at a top-priced 2-1, with Apple's Jade best at 3-1.

Apple's Jade can be backed at 25-1 for the Stan James Champion Hurdle, for which Annie Power is 5-1 to retain her title with the race sponsor.

"He was winging ditches out hunting on Thursday, so he is grand – the more rain for him the better," Elliott said of the Lexus Chase runner-up.

FIRST PUBLISHED 4:18PM, JAN 22 2017
The Punchestown mares' race is one of a couple of races that we're considering for Apple's Jade