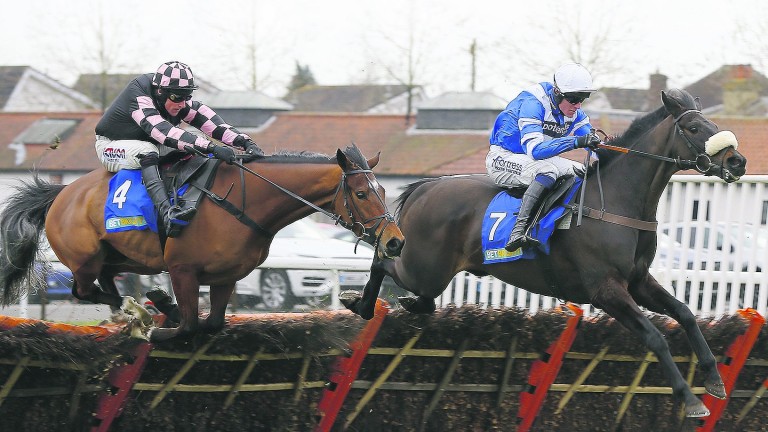 Paul Nicholls bids to fill a rare gap in his portfolio when he saddles Zubayr and High Secret for this fiercely competitive handicap.

Scottish Champion Hurdle short-head second Zubayr, the mount of Sam Twiston-Davies, looks the obvious number one for Nicholls, who has had plenty of runners here and saddled the second and fifth behind Gwafa last year, but handicap debutant High Secret was very useful on the Flat and is still open to improvement following a Grade 1 novice fourth at Aintree.

Explaining his lack of success in the race but offering hope for a change in fortune, Nicholls said: "By the time we get here my horses are usually too badly handicapped, but I've two good chances and I'm hoping it might be different this time, particularly with Zubayr, as I think there's more to come from him."

Seamus Mullins has been punching above his weight in similar company this season and, following Chesterfield's Scottish Champion Hurdle win, he saddles two live chances in Fergall and Song Light.

Evan Williams is hoping for a third win in five years, with smart veteran Court Minstrel and last year's fourth John Constable bidding to follow in the footsteps of Barizan and Ballyglasheen. Philip Hobbs, who saddles bottom weight Multiculture, is also bidding for a third win, 19 years after his first.

Evan Williams, trainer of Court Minstrel and John Constable
They are both spring horses and conditions are right for them. Court Minstrel ran a great race in the County Hurdle and the warmer weather helps him at his age. John Constable had a minor wind op and wore a tongue-tie for the first time when falling at the last at Aintree. He might not have beaten Chesterfield, but that's obviously strong form.

Paul Nicholls, trainer of Zubayr and High Secret
Zubayr always comes good at this time of year. Jumping the last a bit slowly might have cost him the race in the Scottish Champion Hurdle but he's in good form and I think he's on a mark he can win off. High Secret ran really well in the Grade 1 at Aintree. Whether he's a few pounds too high I don't know, but he's a good horse too.

Dan Skelton, trainer of Optimus Prime and Red Tornado
Two nice chances. Optimus Prime was obviously going to go close before he was hampered at Newbury and I've always thought this race would suit him. Red Tornado isn't obviously well handicapped, but his form is holding up really well and Bridget [Andrews] gets on very well with him.

Ian Williams, trainer of London Prize
The Scottish Champion Hurdle was a bit of a messy finish and I'd like to think he can improve a little on that form with a bit better jumping and a bit better passage. I wouldn't swap him.

Seamus Mullins, trainer of Fergall and Song Light
Fergall isn't a winter horse so we ran him on the Flat and then came straight here. He didn't get the run of the race when seventh here two years ago and he showed there's still a bit of fire in his belly when he was third at Ascot. Song Light didn't turn up in the County Hurdle but ran right back to his best when second in the Sussex Champion Hurdle. Both are in great form at home.

Jim Goldie, trainer of Great Fighter
He's improving and he likes goodish ground. It's a big step up, but he won well at Perth and Ayr so deserves his chance.

Philip Hobbs, trainer of Multiculture
He's done everything extremely well but it's difficult to assess just what level he's at and better ground is an unknown, although I've no reason to think it's a negative. I suspect the handicapper has him about right, but I hope not.

FIRST PUBLISHED 6:00PM, MAY 12 2017
By the time we get here my horses are usually too badly handicapped, but I've two good chances and I'm hoping it might be different this time