ITV Racing tips: one key runner from each race on ITV on day four of York 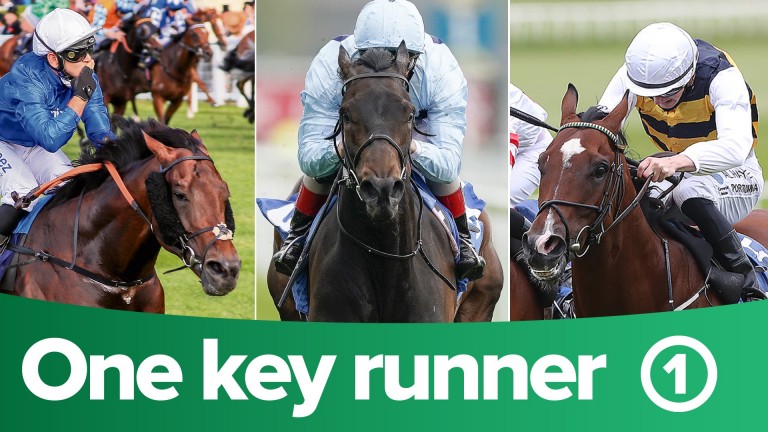 ITV will be broadcastingfour live races fromYork, plus two from Sandown, on Saturday. The action on dayfour at York features some high-class names, notably Space Blues, Real World and Euchen Glen, and we've got you covered for the day's terrestrial TV coverage.

Godolphin's exciting Royal Hunt Cup winner Real World is strongly fancied to make a first attempt at Group level a successful one. Saeed bin Suroor has won this race on five occasions, including back-to-back in 2006 and 2007 with the Godolphin-owned Echo Of Light, so the four-year-old is in the best possible hands to continue an unbeaten season.

John and Thady Gosden's Reach For The Moon received a significant form boost when Harrow wonthe nursery at York on Thursday. Owned by her majesty The Queen, the Chesham Stakes runner-up dominatedat Newbury last time out and should be difficult to stop with Frankie Dettori booked. Star From Afarhh and Rerouting should offer interest on their second starts following debut wins.

SPOTLIGHT TIP:Reach For The Moon

A competitive 22-runner handicap, in which the consistent Dhusan offers some interest. Trained by William Haggas, the three-year-old stayed on strongly to finish second at Ascot when last seen and has the benefit of Tom Marquand back in the saddle. Limerick scorer Top Of The Castle is an interesting contender as William Buick teams up with Aidan O'Brien for Ballydoyle's only runner. Sir Mark Prescott's progressive Summer's Knight aims to make it a remarkable five wins this year.

Simon and Ed Crisford took this contest for fillies and mares last year with Maamora, who will defend her crown as the oldest horse in the field at the age of five. Group 2-winning filly Indigo Girl could complete a double on the card for Frankie Dettori and John and Thady Gosden. Coral Distaff winner Auria also offers interest for Andrew Balding and Oisin Murphy.

Perhaps the intriguing candidate is Potapova, as it was unlike Sir Michael Stoute to go from novice races straight to a Group 1

Last year's winner Safe Voyage is one of two contenders for John Quinn, who also saddles Royal Ascot winner Highfield Princess. The likeable Sir Busker and Pogoare sure to run their races in a competitive renewal, but Godolphin's globetrotting star Space Blues is the one attracting the most support from the punters. Already a course-and-distance winner back in 2019, Charlie Appleby's five-year-old is fancied to build on his fourth in the Lennox at Glorious Goodwood last month.

There should still be more to come from three-year-old filly Primo Bacio, who looks an appealing alternative to top-rated Space Blues

Johnny Murtagh took the 2014 running with Mutual Regard and holds two strong chances with Sonnyboyliston and Mirann. Last year's winner Fujaira Prince defends his crown from the head of the weights for Roger Varian and Andrea Atzeni.

The pick is Mirann withthe return to 1m6f boosting his prospects. Humanitarian and Hamish are noted despite long lay-offs

The ITV7 competition is back and is completely free to play, with a potential £50,000 up for grabs. Users will need a Sky Bet account to enter, so if you don't already have an account sign up usingthis link and take advantage of the free bet offer.

1.50 York: fast-improving Real World out to continue march towards Group 1s in Strensall

2.05 Sandown:will the Queen's Reach For The Moon be another winning Solario favourite?

2.25 York:can King Of The Castle lay one more ghost to rest for late sire Galileo?

Big-race analysis: do you need a Group horse for the Ebor? Keith Melrose is not convinced (Members' Club)