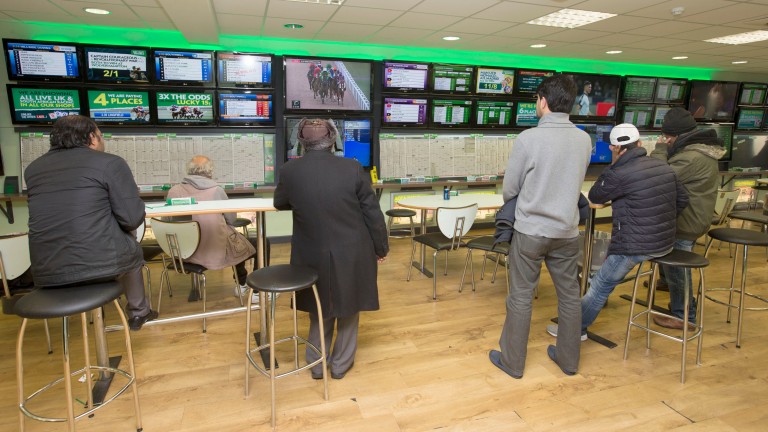 Punters watch the action on Tuesday at the Paddy Power shop in London's Commercial Road
Dan Abraham
1 of 1
By Tom Kerr 7:06PM, JAN 10 2017

Lunchtime in London. Traditionally boom time for the City's many bookmakers as hundreds of thousands of office workers nip out for an overpriced sandwich and – for many – a quick punt as well.

As befits an area where billions are gambled every minute, there are dozens of bookmakers squirreled about the roads and lanes of the capital's financial quarter. Inside an eclectic customer base of bankers, builders and retail workers congregate for what can be a blessed relief from the heaving streets outside, a little slice of solitude in the City.

Tuesday though is no ordinary day in the bookies. This is the second day in a row that Coral, Ladbrokes and Betfred, who between them operate more than 5,000 betting shops, have no pictures from any of the British race meetings.

This is the consequence of an ongoing standoff between those firms and The Racing Partnership, a new betting shop media rights vehicle that owns the rights to six Arena Racing Company tracks – Doncaster, Lingfield, Southwell, Windsor, Worcester and Wolverhampton – with many more to follow in the coming months.

The question now is who blinks first, the racecourses or the bookies? Much of that will depend on what the effect is on customer behaviour: will they bet in the Paddy Power and William Hill shops who do have pictures, costing the holdout bookies who don't? Will they turn to gaming machines, costing racing not the bookies? Or will they simply withhold their custom entirely, costing everyone?

Judging by the sparsely populated Ladbrokes on Great Tower Street, just metres from the Tower of London, the lack of pictures are biting, if only softly. "I've not seen an effect yet, but a few people have queried it," says Paul Landsberg, behind the counter. "You're not going to put a bet on if you can't see it. We've boosted prices – you get best-odds-guaranteed all day – but I think people who want to bet on racing may have just gone elsewhere."

Things are a little busier in the Coral in Fish Street Hill, where customer Richard Gray is tucking into a Pret sandwich and perusing the Racing Post as the unseen 1.00 at Lingfield takes place and something called 'unofficial off-tube commentary' is pumped through the speakers.

"I noticed the lack of pictures yesterday and went in the Paddy Power and everyone was in there," says Gray. "Who's fault is it? The fact Paddy Power have pictures suggests it's the bookies' fault, but it's the punters who suffer if they can't see pictures. I'd definitely go to Paddy Power if I was having a bet on the horses."

Given all this, you might expect the local Paddy Power, just outside Monument tube and one of only a handful of shops showing the racing in an area dominated by the holdout trio, to be crammed with punters. It's not really the case though as there are just four of us (including Richard, who pops in a moment after I do) watching the action at Southwell, with another couple on the machines.

"It's a bit busier today than it usually would be as others aren't showing the races," says Ruth Horsley, behind the counter. "Lunchtime is the busiest period for us, but normally it's more machines than racing, although that varies." Ruth's colleague suggests they ought to publicise the fact they're one of the few shops actually showing the racing; it's an excellent idea, if a little surprising head office haven't thought of it themselves.

Around the corner on Fenchurch Street, past a Betfred deserted but for two besuited customers on the gaming machines, and another Coral customer Mike Anderson expresses his frustration with the lack of pictures.

"I'm not betting on the horses today but to be honest if I was going to have a bet I'd go elsewhere. It's like the bad old days when you just got radio commentary," he says.

"I don't know who's to blame, but I struggle every day with Southern Rail and like with that I just wish they'd sort it out. It's the customer who suffers."