It's Gold Cup for Cue Card as Bishop rules out Ryanair 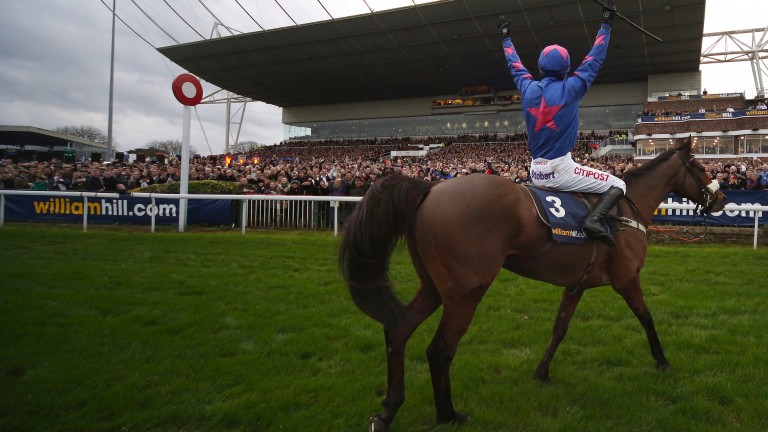 Cue Card will have another shot at the Timico Cheltenham Gold Cup in what could be his last attempt at the historic prize, connections underlined on Tuesday, despite the popular 11-year-old being the market leader for the Ryanair Chase with several firms.

Owner Jean Bishop said the two options had been discussed with trainer Colin Tizzard but the decision had been taken to go for gold on March 17, which falls exactly seven years after Cue Card won the Champion Bumper.

Cue Card was entered for the Ryanair Chase, which he won in 2013, as a potential alternative to the Gold Cup after finishing runner-up to stablemate Thistlecrack in the King George VI Chase.

Although Bishop admits odds-on Gold Cup favourite Thistlecrack will be tough to beat, she said Cue Card might not have been at his best at Kempton and deserves another crack at the showpiece contest, in which he fell three out last year with all to play for. 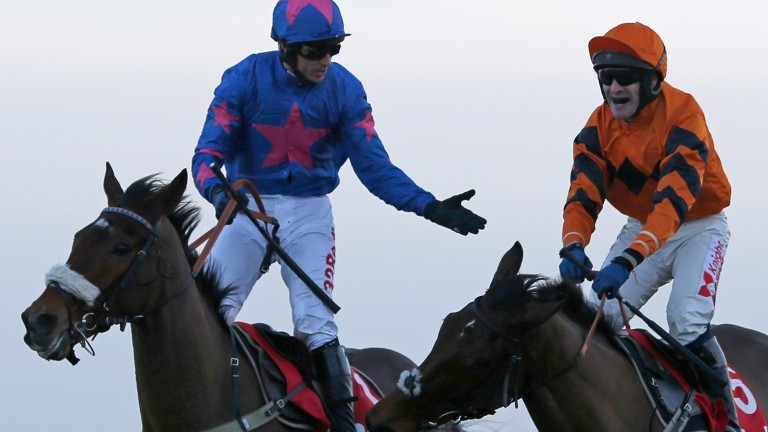 Paddy Brennan on Cue Card (left) congratulates Thistlecrack's rider Tom Scudamore after chasing him home in the King George at Kempton
Alan Crowhurst
"We're going for the Gold Cup," she said. "We've had a talk about it and that's what we've decided.

"Now we've made our minds up we haven't got to keep talking about it. That's what we're going to do. I don't know what the opposition will be, but he deserves to go and take his chance.

"Paddy [Brennan] thinks the ground might have been a factor in the King George. We got to Kempton early and they gave the going as good, and I thought then it might not be on his side. Paddy said it was the same as at Wetherby and he wasn't at his best there. If he wasn't at his best at Kempton, he actually did well to finish second. 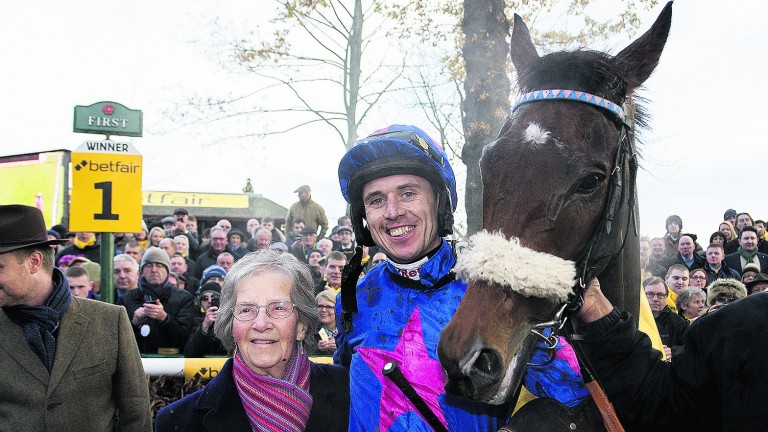 Cue Card with Jean Bishop and Paddy Brennan after victory in the 2016 Betfair Chase at Haydock The owner said of the Gold Cup decision: 'Now we've made our minds up we haven't got to keep talking about it'
Edward Whitaker
"They are reasons rather than excuses. Probably the ground was too dry for him. And horses can be fine one day and not so fine the next, can't they? He seemed to bounce back when he got home, so it might have been that he had an off day."

Cue Card finished three and a quarter lengths behind the eased-down Thistlecrack and a short head in front of third-placed Silviniaco Conti. He is due to have his next start in the Betfair Ascot Chase on February 21.

Bishop continued: "I don't know if there's a horse who can live with Thistlecrack, but all his career Cue Card has never run away from anything. His races have always been strong races.

"Gold Cup day will be exactly seven years since he won the Bumper, and he does like Cheltenham.

"I'd rather him go and have a try there than go for something else. I expect it will be his last chance of going for the Gold Cup. He'll do his best and we'll see how it goes."

She added: "He'll run at Ascot next. That will give him a refresher. We thought last year from the King George to Cheltenham was a bit too long a gap without a run."

FIRST PUBLISHED 6:16PM, JAN 17 2017
I'd rather him go and have a try there than go for something else. I expect it will be his last chance of going for the Gold Cup. He'll do his best and we'll see how it goes