It's Appleby again as Francis Of Assisi strikes yet another blow 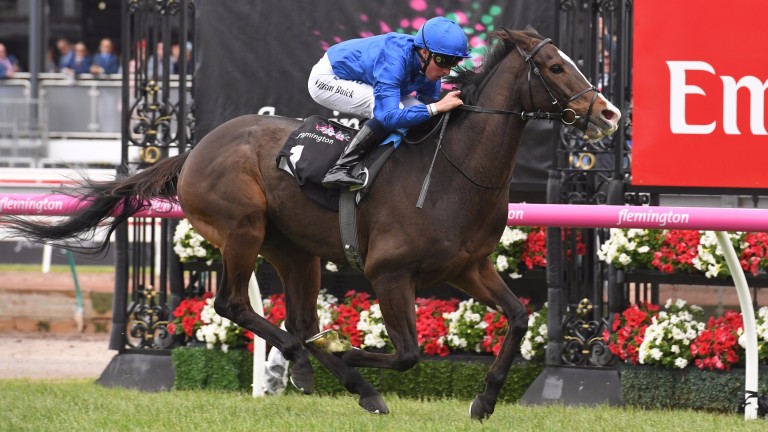 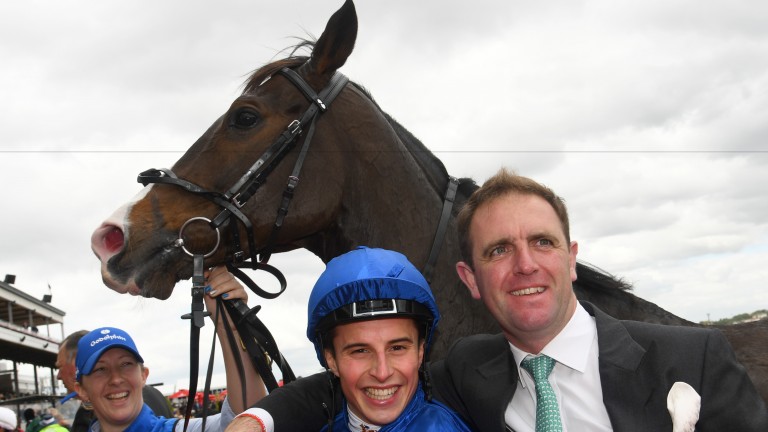 Francis Of Assisi had only daylight in behind him as he scooted clear at Flemington
Vince Caligiuri
1 of 2
By Mark Scully in Melbourne 5:41PM, NOV 5 2016

Charlie Appleby struck yet again in Melbourne when Francis Of Assisi posted a second wide-margin victory following his Bendigo Cup success a week and a half ago.

Connections were disappointed on Friday when Scottish was ruled out of Saturday's Group 1 Emirates Stakes with a strained near-fore fetlock but were left delighted when Francis Of Assisi kept the stable's excellent run going.

Partnered this time by William Buick instead of Kerrin McEvoy, the gelding loomed up to long-time leader Tom Melbourne, who was grabbed late on by the Appleby-trained Oceanographer in last Saturday's Lexus Stakes at the same course, before powering clear.

The winning margin was a massive ten lengths to Vengeur Masque, with Tom Melbourne doing enough to take third another three quarters of a length adrift, with the win Godolphin's third in the race following the successes of Hatha Anna in 2001 and Fantastic Love in 2004.

The sparking form of Charlie Appleby's string has seen them scoop a combined A$1.44 million in prize-money across a total of nine starts, with Qewy, Oceanographer and Francis Of Assisi more than trebling their career earnings.

Scottish also picked up a handy £210,396 when second in the Caulfield Cup.

"This horse has been leading all the work out here and I have to say, you can see mentally he's just thriving," said Appleby. "He's had decent horses coming up alongside him every morning but when he's got his own head in front, he thought he was King Kong. We thought he might have the credentials to perform well down here and we couldn't be any more pleased with what he's achieved."

Appleby confirmed Qewy's remaining target is next week's Sandown Cup and not the Zipping Classic and the trainer also confirmed all five of his runners – Scottish, Second Wave, Qewy, Oceanographer and Francis Of Assisi – will leave Australia in the coming weeks.

Appleby said: "We'll get them all back home, regroup and think about a team for next year. We brought these horse out here to test the water and we had no idea how they would run because it was our first experience over here.

"It's been a great learning curve for us and we couldn't have asked for it to go any better. Unfortunately, it's just raised the bar for next year when we pitch up, so let's hope we can perform as well!"

Awesome Rock (Stephen Baster/Leon and Troy Corstens), who was disqualified after being first past the post in the Australian Cup over course and distance in March, finally gained a first win at the highest level yesterday.

The victory, which was the first for the Corstens since son Troy joined father Leon in training partnership, sparked wild scenes of celebration.

"I want to wait until they call correct weight," Troy Corstens joked. "We've said all along he's such a beautiful animal and we were desperate to get him the Group 1 he deserves. The way Stephen tracked Vadamos was brilliant, it was an unbelievable ride and it's brilliant because he's a good mate of mine."

Vadamos had been far too keen in the Cox Plate at Moonee Valley a fortnight ago and the French raider was headstrong again as he tore through the opening furlongs, despite the testing wind gusting across Flemington.

"He ran really well," said jockey Damien Oliver. "He was still keen but more manageable today, he didn't want to take off mid-race. It has been very difficult for the leaders today, so under the circumstances I think he ran well."

Ridden by Ben Melham, who partnered Black Caviar to win this race six years ago, Malaguerra fended off the late dive of Spieth to score by a nose, with half a length back to Fell Swoop in third.

The gelding was having only his second start for Peter Gelagotis, after leaving the stable of Lee and Anthony Freedman earlier this year and Gelagotis paid tribute to his former handlers.

"A lot of credit has to go to the Freedmans, they did a lot of good work with the horse," he said. "I came into the race today quietly confident and I'm so proud for the owners. A lot of thought goes into these situations and good things happen to good people."

He had been off the track since finishing sixth in the Irish Derby of 2013 but Little White Cloud posted a remarkable win in a 1m2f handicap at Flemington yesterday.

Ruler Of The World was sent off the 4-5 favourite at the Curragh that day, with Trading Leather ultimately coming out on top and many could have been forgiven for thinking we had seen the last of that contest popping up in the form book.

The now seven-year-old had other ideas though, as he battled to a length and a quarter success in the colours of Tuesday's Melbourne Cup-winning owner Lloyd Williams.

"They've done a great job at the farm in conditioning him," said Williams' son Nick. "You could knock me over with a feather here, I couldn't have envisioned him being ready to win today.

"We knew he had the ability but they don't normally win after that long off."

FIRST PUBLISHED 9:53AM, NOV 5 2016
He's had decent horses coming up alongside him every morning but when he's got his own head in front, he thought he was King Kong

It's not High Definition but Lingfield trials could still unearth an Epsom star Exciting Adayar could be the next Derby contender to boost a resurgent trial Appleby denied home win as Master Of The Seas and Buick go down fighting 2021 Flat jockeys' championship: the leading contenders on their title chances William Buick opts for Master Of The Seas over One Ruler as 2,000 Guineas mount Great News for Saeed bin Suroor as he gets up and running on turf