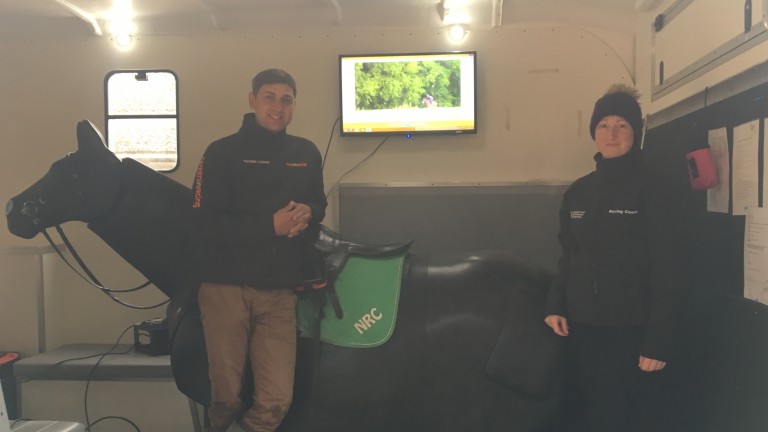 There is nothing out of the ordinary at James Given's yard in Lincolnshire on a wet Thursday morning. Shortly after 8am, first lot are preparing to head to the gallops, the trainer is busy scouring through the stable's upcoming entries in the shelter of his office and morning coffee is on the go.

Yet what is to come promises to be anything but your average work morning, with the yard taking part in the Regional Staff Development Programme, where Given's team of six work-riders will be as much under the microscope as the horses they partner.

The duo, armed with video camera, have taken up residence within the crops that could do with a crop by the side of Given's all-weather gallops, ready to catch each horse and, more importantly, rider on camera during their two lots this morning.

That footage will be studied together by Kennemore and the work-riders back in the yard later, with the former jockey on hand to give feedback and advice on what he sees.

In other words, this is a practical staff training day but the beauty of it is the staff don't have to leave their workplace. In fact, they hardly have to change their morning routine and Given believes there is much to gain from the new national programme.

"If you invest in your staff and get them to ride better, you'll train more winners," says the Ebor-winning trainer. "The horses get fitter, they're held together better and there's better feedback to the trainer. Having better, able staff will enable a trainer to do his job better." 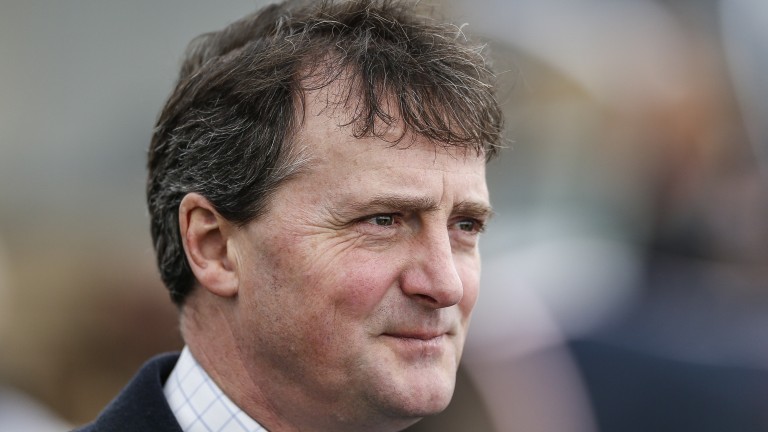 James Given: "I've always advocated trying to get training out into the yard"
Alan Crowhurst/Getty Images

This is the second time in a month Kennemore has spent a morning with Given and his staff, with today's follow-up session focused on making sure the advice from his last visit is being put into practice and to iron out any bad habits that may still linger.

"There have always been courses at the racing school where the facilities are but I've always advocated trying to get training out into the yard," says Given, a long-standing trustee of the British Racing School.

"We all get stuck in the rut of repetition and it's a huge morale boost and a great team training day too. Everyone I've spoken to thinks it's a great idea and has loved it."

While small in size, Given's team does not lack experience. The six riders have well over 50 years in the industry between them, but that does not mean improvements cannot be made.

"I think everyone can see the benefits of this training in the workplace," says the trainer. "However good and however experienced you are, everyone can get something out of it. People do pick up bad habits and having someone interpret what they're seeing is only going to help your position on a horse."

While today's focus is on improving riding and horsemanship skills, the programme also offers stable staff the opportunity to improve their equine first aid, horse management, fitness, nutrition, finance and lifestyle skills, with the prospect of gaining industry and national qualifications without leaving their own yard.

Senior stable staff can even apply to train as rider coaches, giving them the skills to support younger and inexperienced colleagues in their yards.

While she would never say it herself, the impact and success the programme had during its three-year pilot was in no small part down to Trainor, who is passionate about improving the livelihoods of others in the sport and has big dreams for what might be achieved.

The 32-year-old worked with James Bethell and Micky Hammond before joining Mark Johnston's powerful Middleham operation, where she was assistant yard manager for over a decade. Since joining forces with the Northern Racing College, she has championed workplace training for stable staff, who despite being the lifeblood of the industry are all too often the first to be overlooked.

"There's a lot of support for jockeys but I didn't feel the staff perhaps had the support they could have," says Trainor, having returned from the gallops and now setting up the morning's footage on a TV in the back of a converted NRC-branded horsebox in the yard.

"I thought giving them that confidence booster and telling them they're doing a great job would improve things all round, including mental health and a lot of other issues.

"Trainers are very busy and giving work-riders feedback can't always take priority in their day, so it's about letting them know what's out there. We all want the industry to have five-star horsemanship standards and I think that's where the training links in." 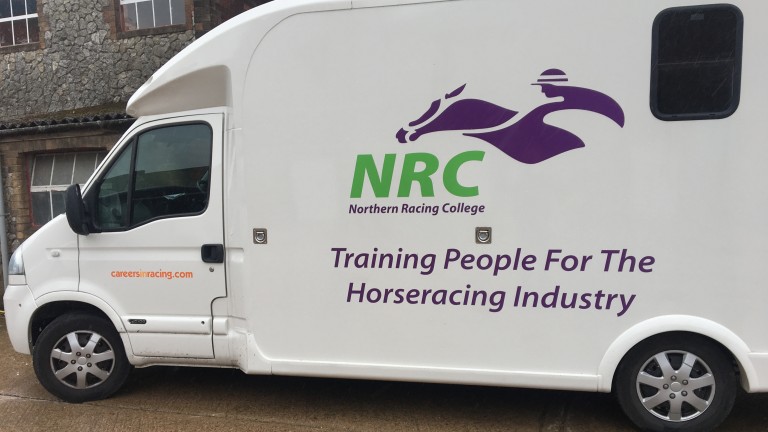 The Regional Staff Development Programme, for which the NRC is responsible for overall management with the British Racing School leading activities in the south, was given a huge boost when granted funding of £329,000 from the Racing Foundation following a pilot that benefited from the expertise of Yogi Breisner and Tim Reed among others.

With the programme having been oversubscribed during the trial, coordinators in Malton, Middleham, Lambourn and Newmarket are now in place to help meet the demand within training centres and outlying areas, and it is hoped the programme will play a crucial role in helping to retain staff in the industry.

"Trainers have got to meet the demands of owners and don't have the time to undertake staff training and that's where we can help them out," says Trainor.

"With us coming in, the staff know the trainers do care about them and they're being thought of, which helps with retention. I'd love to be able to provide training in some form to every yard. That would be the dream; every yard in the country on board and providing some sort of training.

"It's not all about the wages and the pool money, it's about investing in people so the quality of horsemanship and staff is raised."

With their horses washed down and safely back in their boxes, the six staff gather to watch replays of the morning work with Kennemore holding court.

While a decent rider in his own right, Kennemore has no doubt found his calling as a tutor, effortlessly balancing persiflage and praise as he dissects the action. 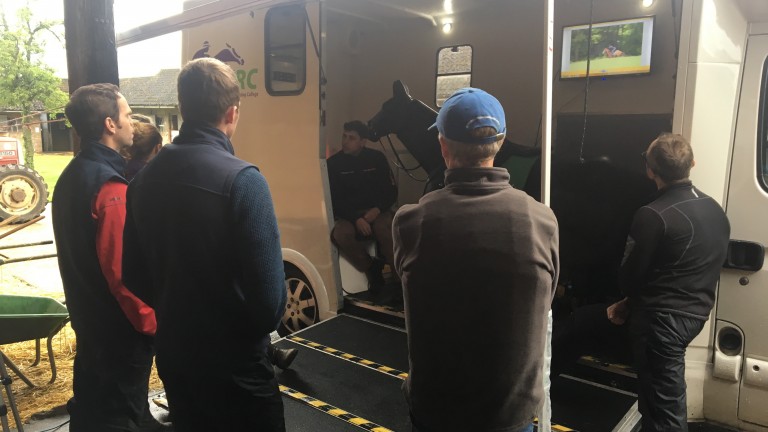 In particular, he focuses on still shots of each rider's position in the saddle, comparing the latest evidence with his last visit to the yard, and is encouraged by the results.

As well as the coach's input, the other riders critique and advise their colleagues based on what they can see and there is a palpable sense that Given's close-knit staff want to get the maximum from the session.

"Why are we all here?" says Kennemore after the video recorder is packed away. "To get winners" comes the right answer before the instructor hammers home his belief that "even the tiny little things make all the difference" where racehorses are involved – get it right at home and the results will follow at the track.

A big focus for Kennemore, 32, is balance in the saddle and he soon has an exercise circuit set up in a covered corner of the yard, designed to test each individual's equilibrium.

While each exercise station is made up of no more than a pair of inflatable balance balls or some resistance ropes, the yard briefly resembles a makeshift gym, the main difference being everyone is having a good time here. 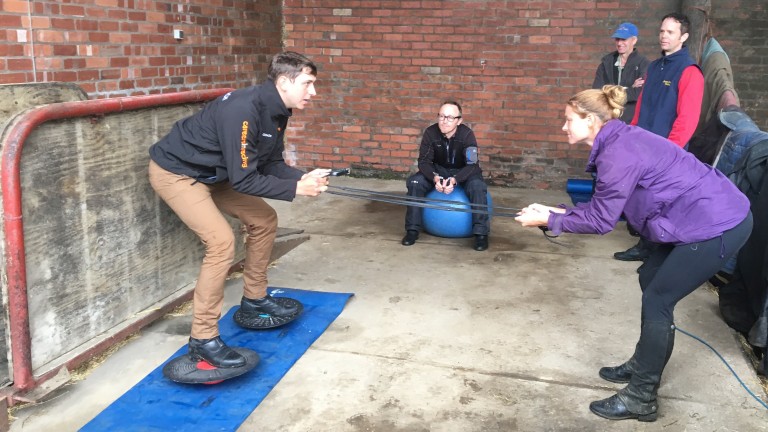 The circuit also includes an Equicizer on the back of the converted horsebox – otherwise known as a mobile training vehicle – which bobs back and forth in the middle of the yard as the riders are put through their paces on the mechanical horse.

Those taking part also receive written feedback and footage of their morning's work, with further support available via phone. After a brief recap by Kennemore, it's back to mucking out and yard duties, although not before some feedback from those who have taken part.

"I'd never seen anything like this before but having them come into the yard can only help work-riders ride better," says Lee Vickers, perhaps the best-qualified person in the stable having previously ridden professionally over jumps in Britain for more than a decade and not long back from a spell riding work in the United States.

Now part of the team at Given's quaint yard, he thinks the training is a must for all stables.

"I actually think it's more beneficial for the older generation because they might not have had any training since they left the racing college 20 years ago," he says. "Suddenly you're getting a refresher course and it wakes them up a bit and improves their riding. Things change over time too.

"Even though I'm older and have been involved such a long time, Russ is bringing in new skills that might change the way people ride. We always knew about balance but he's showing us how and, once he's shown us, we're putting it into practice. Then he's coming back and making sure practice makes permanent.

"By him talking about it and us seeing the results, it's improved everyone's riding."

Urging more trainers to subscribe to the development programme, Vickers, perhaps best remembered for riding Ei Ei in the 2004 Queen Mother Champion Chase, continues: "A lot of businesses have team bonding days and that's what this is – it's great and Russ adds a bit of humour, which keeps everyone happy.

"I really think more yards should get involved – it can only improve their work staff. It's taking an interest in the staff and keeping their improvement going." 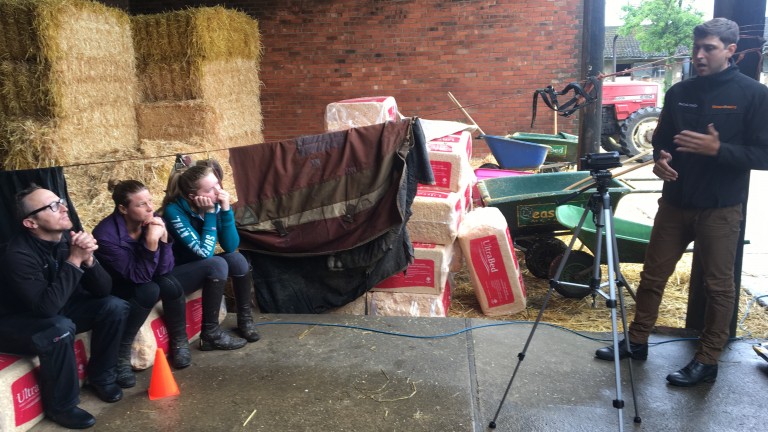 Vickers, it seems, is indicative of the wider feedback the programme has received and those behind it hope a further 2,400 racing staff will benefit from their help over the next three years.

"We've all heard about coaching in tennis and football but for some reason it's never been talked about in racing," says Kennemore, who admits he never saw anything like this for stable staff during his riding days.

"If you don't do something like this, the alternative is the staff having to visit the racing college for a work-riding or continuation course. They have to leave the yard, which trainers aren't big on because it's another rider they're losing for a week.

"We're not going to improve everyone by 100 per cent but one per cent is enough to make a difference."

This is a programme that puts stable staff first and in doing so benefits the wider industry. In many ways it's a win-win situation – not something you can say too often when it comes to racing.

FIRST PUBLISHED 6:00PM, JUN 29 2019
Trainers have got to meet the demands of owners and don't have the time to undertake staff training and that's where we can help them out

'I was caught by the dream – and it's gone on to become a compulsion' The drugs bust, the stun gun and the most extraordinary Royal Ascot finish 'Life moves on' - Sir Michael Stoute looks forward after his most painful year Alastair Down is invited into the wonderful world of the truly unique Derby hero Steve Cauthen: 'I was bulimic at times - and at some point you crack' 'I didn't steal it' - how Steve Cauthen broke the Derby mould on Slip Anchor