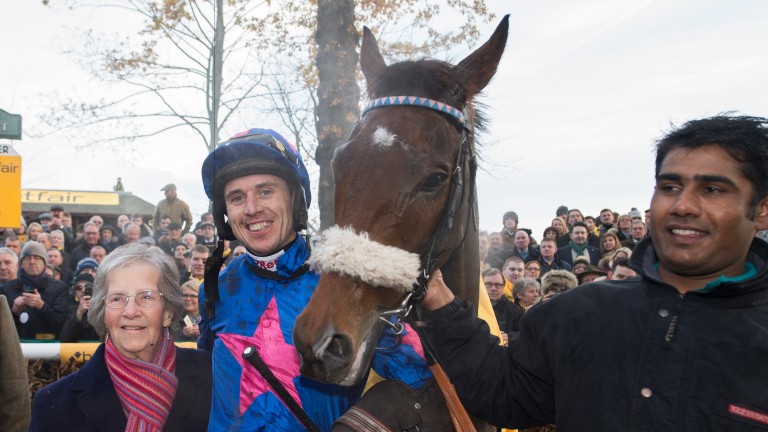 Cue Card: will have Paddy Brennan back aboard on Saturday
Edward Whitaker
1 of 1
By Bruce Jackson 3:02PM, DEC 24 2016

If Cue Card is to surrender his King George crown his rider Paddy Brennan believes it will take the best horse he has seen to do it.

Last year it was Ireland who came to conquer with subsequent Gold Cup winner Don Cossack and Vautour preferred in the betting, but this time Cue Card's main market rival is his next-door neighbour Thistlecrack.

In his blog for race sponsor 32Red, Brennan said: "If Cue Card runs up to his best and Thistlecrack still beats us, I will never have ridden against, or seen, a better horse. I genuinely believe that.

"And that includes the likes of Kauto Star and Denman, who I know all too well from my Imperial Commander days.

"If we're beaten then so be it, but I'll be going out there thinking I'm on the best horse and not expecting defeat."

It took a whip rule-breaking ride from Brennan to get Cue Card past Vautour in the final strides a year ago after Don Cossack fell when looking a danger two out and another win will leave him one step away from the £1 million bonus put up by Jockey Club Racecourses for any horse who wins the Betfair Chase, King George and Timico Cheltenham Gold Cup.

Brennan said earlier in the week after sitting on the Colin Tizzard-trained ten-year-old he felt "as good if not better than ever".

He added: "Cue Card has an official mark of 176 but I'm sure his best performances can be rated higher and nearer 180 so it will be one hell of a feat from Thistlecrack if he can beat us if we're on our A-game.

"Thistlecrack may or may not have to run to the spellbinding level of form that Kauto Star did when winning one or two of his King Georges, but if he can come out best given his inexperience he'll have to be one of the best we've seen in a long while."

Pros: Defending champion and again comes off an impressive win in the Betfair Chase

Cons: Only five of the last 50 renewals have been won by horses aged ten or older and Cue Card has three new young rivals to overcome

FIRST PUBLISHED 6:00PM, DEC 25 2016
If we are beaten then so be it but I will be going out there thinking I am on the best horse and not expecting defeat