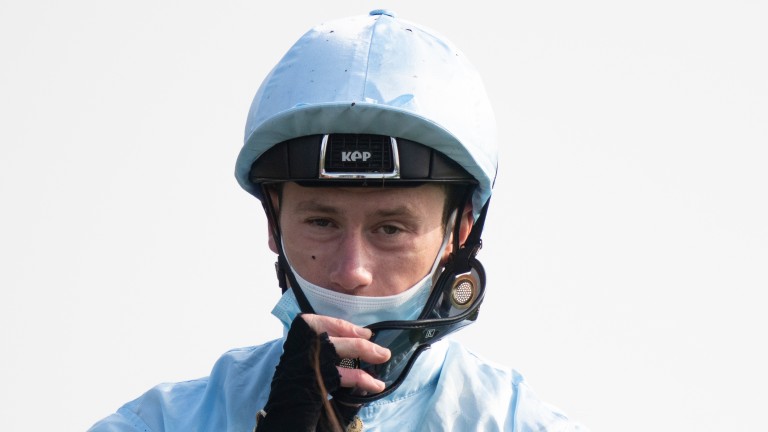 Oisin Murphy: back in action at Newmarket on Saturday
Edward Whitaker
1 of 1
By Lewis Porteous UPDATED 5:04PM, OCT 9 2021

Champion jockey Oisin Murphy has described Friday as a "bad day" as he briefly reflected on the failed alcohol test that ruled him out of the first day of the Dubai Future Champions meeting at Newmarket.

Murphy, 26, was back in action with seven rides at Flat racing's headquarters on Saturday having been stood down from five rides the previous day after failing a pre-race breath test.

"The statement [from yesterday] is all I've got to say for the moment," said the rider before racing on Saturday. "I want to be professional and riding on the big days, so to miss yesterday was major and it really wasn't a good day."

After being out of luck with his first four rides, Murphy landed a big winner in the Cesarewitch as Buzz overhauled Burning Victory.

Murphy's title rival William Buick was aboard Burning Victory, and the Cesarewitch success helped Murphy move the gap back out to seven after Buick had ridden a treble on the card.

Murphy was previously forced to miss his rides at Salisbury in June 2019 having failed a breath test for alcohol.

He was also suspended for three months this year after his urine sample tested positive for metabolites of cocaine in France in July 2020.

On his latest offence, the rider added: "The matter has been referred to the BHA and I'll have to wait for what they say. It also goes to show that you can make mistakes and it was a bad day."

FIRST PUBLISHED 2:25PM, OCT 9 2021
I want to be professional and riding on the big days, so to miss yesterday was major and it really wasn't a good day