'It's a man actually, Derek' ? Tommo blunder a hit on Graham Norton show 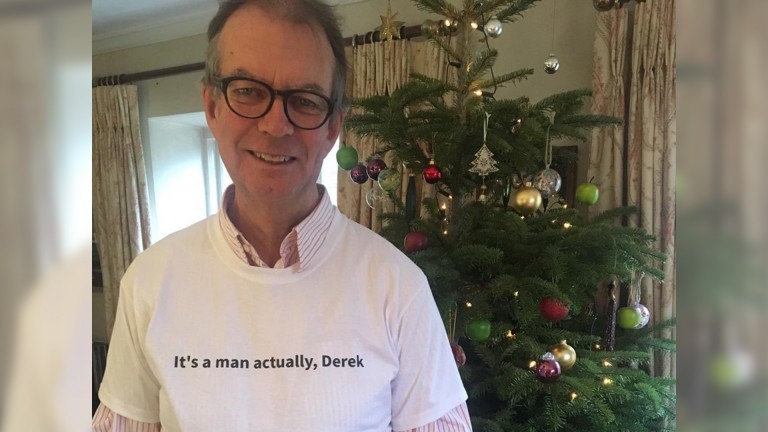 Bob Cooper wearing a specially made T-shirt presented to him by his daughter
1 of 1
By Tony McFadden UPDATED 7:47PM, JAN 12 2019

Six years after the BBC lost the rights to cover racing, the sport made a triumphant return to the Beeb on Friday night. Sort of.

Norton showed Coogan and co a clip, over a decade old, involving Cooper and Tommo which has resurfaced in recent months and gone viral after the Accidental Partridge Twitter account – dedicated to highlighting behaviour reminiscent of Partridge – shared the interaction with its 250,000 followers.

Who’d have thought it @AccidentalP being shown to the man himself on last night’s Graham Norton Show @TheGNShow @BBCOne pic.twitter.com/zNzsO1CoNb

In the clip – which received rapturous applause from Norton's studio audience – Tommo, who was sat in the At The Races studio, handed over to Cooper at Hereford and said: "Oh, you've been joined by a beautiful lady."

To which Cooper, completely deadpan, responded wonderfully honestly: "It's a man actually, Derek."

So popular has the video become that Cooper's daughter gave him a specially made T-shirt emblazoned with the phrase 'It's a man actually, Derek' as a Christmas present.

It also prompted the presenter to send his first tweet – five years after joining the site – of him showcasing the gift. The tweet has received nearly 3,000 likes, but that impressive figure is completely dwarfed by the six million views the video has garnered, plus millions more from its airing on BBC1.

Recalling the incident, Tommo said: "We were handing over to Hereford, and I just took a quick look around and at first glance thought it was a lady with blonde hair. If you're going to get it wrong I suppose it's a good job I got it that way around and not the other way!

"It's had over six million hits worldwide. You've got to have a laugh at it. Things like that happen – it's live TV. It wasn't done on purpose. The guy wouldn't have heard my side of the conversation – all he'd have heard is, 'It's a man actually'. I'm sure he took it well. He's become world famous!"

Cooper suggested every presenter has a bit of Partridge in them, but fears becoming him.

Not Tommo, however, who said: "I did a thing a few years ago for a hotel in Bawtry. People said, 'Tommo, you're just like Alan Partridge.' I said, 'Well thank you very much.' He's a superstar and I love him to bits."

The first Cooper knew of his starring role on BBC was when he woke up on Saturday morning and saw a flood of messages.

He was delighted by how well received it was and said: "It was very much a Partridge moment and Steve Coogan seemed to find it funny – he genuinely laughed at it."