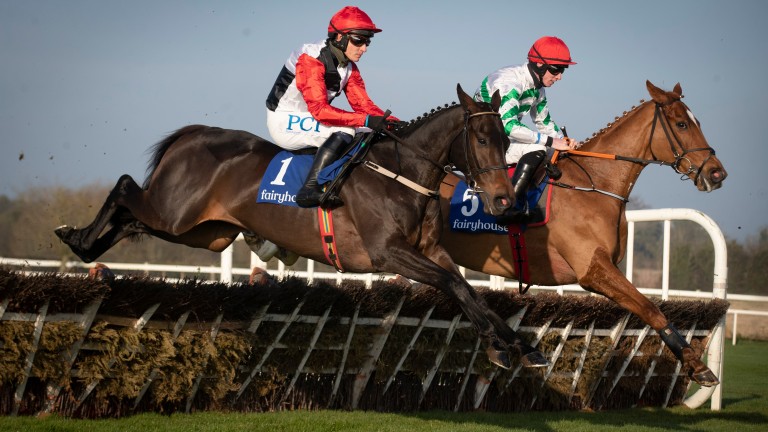 Zanahiyr (right) jumps with Saint Sam on his way to victory at Fairyhouse
Patrick McCann (racingpost.com/photos)
1 of 1
By Brian Sheerin UPDATED 6:28PM, DEC 25 2020

This is the race in which the ill-fated Espoir D'Allen announced himself as a top-notch prospect in 2017, and he is not the only winner to reach dizzy heights, with Apple's Jade, the 11-time Grade 1 winner, successful in 2015.

For all this race has been a steady source of exceptional talent, no winner has gone on to land the Triumph Hurdle. However, Gordon Elliott appears to have a horse capable of bucking the trend.

Elliott is responsible for the top three horses in the Triumph Hurdle betting, including favourite Zanahiyr, who looked out of the top drawer at Fairyhouse last time.

A general 4-1 shot for the Triumph, Zanahiyr will be expected to stretch his unbeaten record over hurdles to three here and Elliott reports the classy prospect to be in top shape.

The trainer said: "We look to have a few nice juveniles and this lad looked very good at Fairyhouse. If he can produce a similar performance he should be bang there, and he's one we're really looking forward to running over Christmas."

No trainer has a better record in this race than Willie Mullins, who would notch his fifth success if French recruit Ha D'or or Saint Sam is successful.

Read a selection of our Boxing Day tipping . . .

Members' Club: 'This race has probably been the plan' – David Jennings' Leopardstown tips

However, Saint Sam will need to bridge a 14-length gap with Zanahiyr after their Fairyhouse match-up.

Mullins said: "Ha D'or is a nice horse but this is a very tough assignment for his first run for us. I think we'll just see where he fits in on the scale of things.

"It'll be very tough for Saint Sam, although I do think he has improved from his debut for us at Fairyhouse. I'm sure the winner has improved too but we have to take our chance."

Joseph O'Brien introduces French winner Busselton along with Druid's Altar, who is set to be ridden with more restraint than when a well-beaten third behind Zanahiyr and Saint Sam at Fairyhouse.

"Busselton hasn't run for a long time, but he won over hurdles in France in May," said O'Brien. "Hopefully he can run well on his first start for us, but it looks a very good race.

"Hopefully Druid's Altar will get a bit closer to Zanahiyr than he did at Fairyhouse. We might change tactics and ride him a bit more conservatively."

The seven-runner field is completed by recent winners Autumn Evening and Jeff Kidder, both of whom would need to improve to trouble likely short-priced favourite Zanahiyr.

Members' Club: regal King George has what it takes to unite racing fans of every stripe

1.15 Kempton: 'His form is very strong' – Alnadam to kick off big Boxing Day for Skeltons

1.50 Kempton: 'On his hurdles form he'd be a strong favourite' – If The Cap Fits excites Fry

2.25 Kempton: 'It will take something remarkable for Epatante to get beat in Christmas Hurdle'

Members' Club: 'It's an open race but Cyrname is in top form' – Harry Cobden joins the Saturday Jury

2.35 Limerick: No Leopardstown for Townend as he eyes Grade 1 with Asterion Forlonge

FIRST PUBLISHED 6:00PM, DEC 24 2020
We look to have a few nice juveniles and this lad looked very good at Fairyhouse