Irving fights off Jade to win Grade 1 for second time 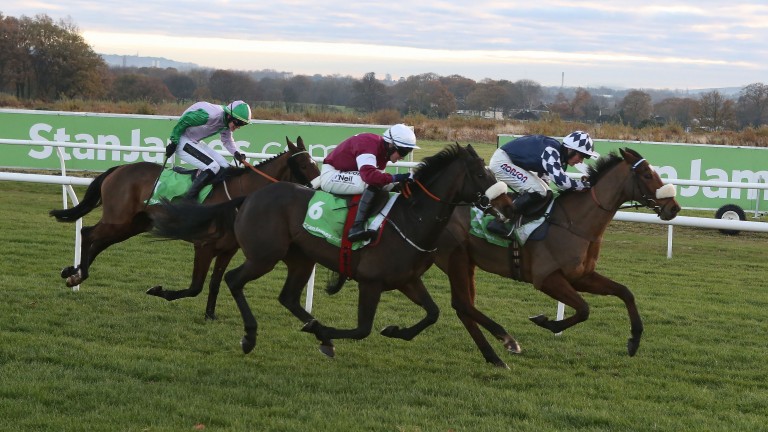 The Fighting Fifth Hurdle now has two dual winners this century. The first, Harchibald, gave everything until he came off the bridle. In style terms Irving, who joined him in that company with a nose success over Apple's Jade on Saturday, is the direct negative.

Asked about how his mount travelled, winning rider Harry Cobden, who was having his first ride in a Grade 1, said: "He didn't really take me to the start! He was off the bridle all the way."

Unlike so many of the top two-mile hurdle races before the Champion Hurdle, there was a true and even pace, which had outsider Mirsaale in trouble after a flight.

The other five turned in with chances, of which Irving's looked the slimmest. Petit Mouchoir crashed out three flights from home, then Sceau Royal faltered after two out, the test seemingly too much for him.

Irving took over and looked set to run out a more convincing winner than the narrowest margin before Apple's Jade, outpaced after she'd been hampered by Petit Mouchoir's fall, rose from the ashes to ensure a finish even more exciting than last year's in which her Gigginstown House Stud colours just prevailed with Identity Thief.

Irving's trainer Paul Nicholls, at Newbury, said: "That's a good team effort to get him back because he's had more problems than you can imagine; we couldn't even take him for a racecourse gallop, but have worked and worked and worked him.

"There was no plan after today and he won't run for a while - I think he jumps better when he's fresh. I wouldn't mind running him over two and half miles, but he won't run in the Christmas Hurdle - he'd get lapped in that - and won't even have an entry in the Champion Hurdle."

Of Cobden, he added: "I'm thrilled for Harry - that's his first Grade 1 and he's a big part of the team."

The lack of a future plan for Irving was confirmed by Dan Downie, racing manager to the Axom XLIX syndicate that, on a day where many connections were elsewhere, were too numerous to all fit in the winners' enclosure.

"We haven't thought much beyond this, but he goes so well fresh so we won't see him out very often," Downie confirmed. "Small fields, soft ground. We're thinking about Leopardstown at Christmas, but we're giving thought to everything."

"It's great to have a dual Grade 1 winner, unbelievable. And he didn't cost much, either."

Trainer Shark Hanlon travelled across with Hidden Cyclone, who led from flagfall and stayed within 'could he really?' distance all the way to the line. "He's run an absolute cracker. I thought if we finished in the first three I'd be delighted and he has, beaten just a couple of lengths."

It is just about feasible, then, that the first three could all meet again in Ireland this winter. Even if the major players in the Champion Hurdle stay away, Saturday at Newcastle has proved that they can deliver plenty of excitement all of their own.

FIRST PUBLISHED 3:09PM, NOV 26 2016
He won't run in the Christmas Hurdle - he'd get lapped in that - and won't even have an entry in the Champion Hurdle