'A true champion' - O'Brien tribute after death of Giant's Causeway 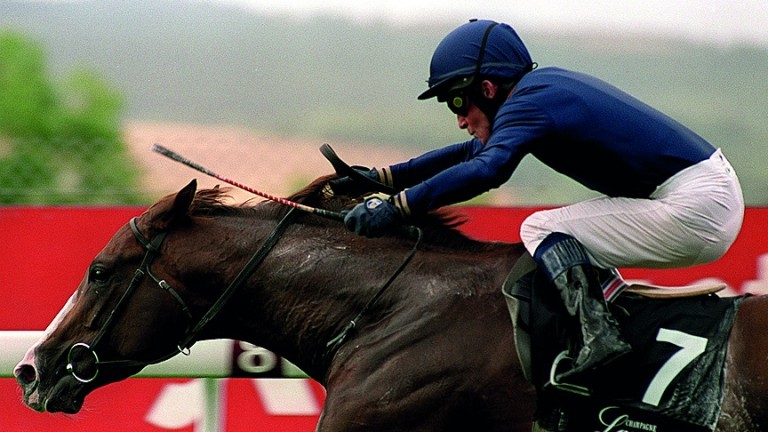 Giant's Causeway: labelled the Iron Horse due to his ultra-tough attitude and constitution
Edward Whitaker
1 of 1
By Mark Storey UPDATED 7:06AM, APR 18 2018

Aidan O’Brien hailed Giant’s Causeway as ‘incredible, brave and tough’ as he saluted the life of the champion dubbed the ‘Iron Horse’, who has died aged 21.

So named for the battling qualities which carried him to five Group 1 wins during a remarkable three-year-old campaign, Giant's Causeway, later a leading sire in North America, died on Monday night at Ashford Stud, his Kentucky birthplace.

O'Brien, who trained the son of Storm Cat through a 13-race career in which he never finished out of the first two and raked in more than £2 million in prize-money, said: "He was an incredible horse, really.

"He was brave and consistent and he just loved a battle. He's a great sire of broodmares and he puts that toughness that he had into all of his progeny.

"He was a true champion and such a solid horse who raced at the top level and gave it his all each time. He really was incredible."

Unbeaten as a two-year-old, Giant's Causeway finished second in both the 2,000 Guineas and Irish 2,000 Guineas before a remarkable run of five straight Group 1 wins that were the bedrock of his legendary status.

It was not just the wins but the manner of them that helped sear his status into racing’s collective consciousness.

In a glorious summer, victory in the St James’s Palace Stakes at Royal Ascot under Mick Kinane was followed by success in the Eclipse, when ridden for the only time by George Duffield.

In both Giant’s Causeway refused to be beaten as he was headed and then battled back to beat Valentino a head at Ascot and Kalanisi by the same margin in the Eclipse at Sandown.

Victory in the Sussex Stakes at Glorious Goodwood by three-quarters of a length was his most emphatic of the five and foreshadowed further successes in the International at York and the Irish Champion Stakes at Leopardstown.

His second in the QEII at Ascot heralded a trip to the Breeders’ Cup Classic at Churchill Downs where he lost by a neck to Tiznow.

Named Cartier Horse Of The Year in 2000, he retired to stud at the end of his three-year-old season, standing with Coolmore in Ireland before transferring to their Australian and then American units.

Coolmore America manager Dermot Ryan said: "To foal, raise and race a horse of Giant's Causeway's calibre is every owner/breeder's dream, so for him to stand as a stallion at his birthplace, and go on to be a three-time champion sire is nothing short of sensational.

"Giant's Causeway was a once-in-a-lifetime horse, and I would like to thank the owners, the Magnier and Tabor families, for entrusting us with his stud career.

"I would also like to extend my gratitude to all of the stallion handlers at Ashford past and present for providing the highest level of care for Giant, in particular Blaise Benjamin and Richard Barry. He will be a huge loss not just to us, but to the industry as a whole."

A YEAR TO REMEMBER

April 9, Gladness Stakes
On his only start of the season outside Group 1 company Giant's Causeway had to work but proved too good for his older rivals.

May 6, 2,000 Guineas
Lost his unbeaten record but was not disgraced, simply unable to match King's Best's acceleration.

May 27, Irish 2,000 Guineas
Giant's Causeway battled well but was unable to reel in Bachir and was a beaten odds-on favourite.

July 8, Coral-Eclipse
On his first start at beyond a mile Giant's Causeway stayed on stoutly to get the better of an epic dual with Kalanisi.

August 2, Sussex Stakes
By Giant's Causeway's standards this was a cosy success, holding the challenge of Dansili and looking in full control inside the final half furlong.

August 22, Juddmonte International
Came out on top of another thrilling duel with Kalanisi, producing a typically tough display to rally and get the verdict by a head.

September 9, Irish Champion Stakes
Won his fifth Group 1 in succession as he held the late charge of Greek Dance. All five wins were achieved by less than a length.

September 23, QEII
A shock defeat as Observatory came fast, wide and late to overhaul Giant's Causeway before he had a chance to rally.

FIRST PUBLISHED 5:55PM, APR 17 2018
He was brave and consistent and he just loved a battle