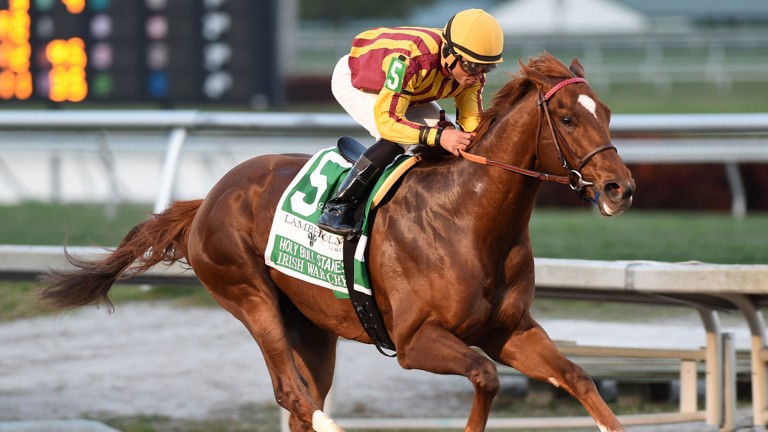 Leading Kentucky Derby contender Irish War Cry bids to extend his unbeaten sequence to four as the Fountain of Youth Stakes at Gulfstream Park provides the highlight of a Saturday programme full of US Classic significance.

However, the Fountain of Youth – the Grade 2 prep race for the $1 million Florida Derby on April 1 – looks the hottest contest on show as the Graham Motion-trained Irish War Cry, who is vying for Kentucky favouritism with British bookmakers, is taken on by dual Grade 1 winner Practical Joke.

Irish War Cry leapt into the Classic reckoning when making all for a dominant victory in the Holy Bull Stakes at this venue a month ago, when his victims included Breeders' Cup victor Classic Empire. He could face more pace pressure this time around.

Motion, who won the Kentucky Derby with Animal Kingdom in 2011, said: "With Animal Kingdom, he ran in an allowance race at Gulfstream and was actually beaten, so this horse in way ahead of him in that respect. He's already done a lot more, and that's not to compare the two. But it's just a different path than I've ever been down before."

With Joel Rosario choosing to stay aboard Irish War Cry, Jose Ortiz gets the leg-up on Practical Joke, who was third in the Breeders' Cup Juvenile after winning both the Hopeful Stakes and Champagne Stakes in New York and is making the first start of his three-year-old campaign.

"He has done really well with the time off," said trainer Chad Brown. "We just backed off him a little bit and let him grow up some. He was always an outstanding-looking horse, but he has gotten bigger and stronger. I'm so impressed with him. His works have been great. He's really enjoying being down here."

El Areeb (Cathal Lynch/Trevor McCarthy), who has won his last four races by a cumulative 29½ lengths, faces his stiffest test yet as he bids to retain top-dog status among the New York Derby hopefuls.

So well has the grey been working since winning the Withers Stakes by more than four lengths a month ago that his trainer has revised his original plan to miss this Grade 3 trial and wait for the next month's Wood Memorial.

All eyes will be on Unique Bella (Jerry Hollendorfer/Mike Smith), who looked a superstar filly in the making when taking the Las Virgenes by nearly nine lengths on her most recent appearance.

Although the daughter of Tapit is ante-post favourite for the Kentucky Oaks, another dominant performance here could tempt her owner to take on the colts in the Derby instead.

This $100,000 contest is no 'gimme', however, with Grade 1 winners Abel Tasman (Simon Callaghan/Joe Talamo) and Noted And Quoted (Bob Baffert/Martin Garcia) in opposition.

FIRST PUBLISHED 6:00PM, MAR 3 2017
Practical Joke was always an outstanding-looking horse, but he has gotten bigger and stronger