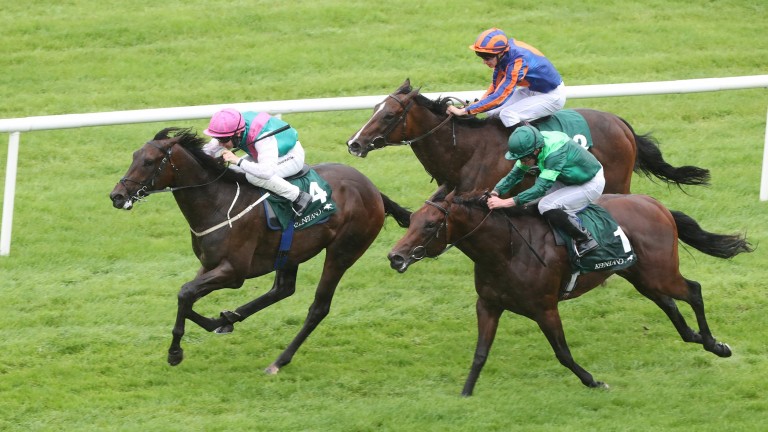 Siskin: won last season's Phoenix stakes and will once again do battle against Monarch of Egypt (green) and Royal Lytham (blue and orange)
CAROLINE NORRIS
1 of 1
By Brian Sheerin UPDATED 6:36PM, JUN 11 2020

He may be yet to taste defeat from four starts as a juvenile, but question marks hover over market leader Siskin as he tackles a mile for the first time.

So far, the Ger Lyons-trained colt has done all of his winning over six furlongs, with his unbeaten two-year-old season culminating in a victory in the Group 1 Phoenix Stakes at this track last August.

However, Siskin's fruitful year was not supposed to end there.

Lyons, buoyed by the confidence of winning his first Group 1 on home shores with the son of First Defence, made his way to Newmarket the following month for the Middle Park Stakes, but the colt became unruly in the stalls and had to be withdrawn.

There will be some who will hold that episode against Siskin, but those questioning his attitude could do worse than scanning back to the Phoenix Stakes and what he overcame in the preliminaries of that race. 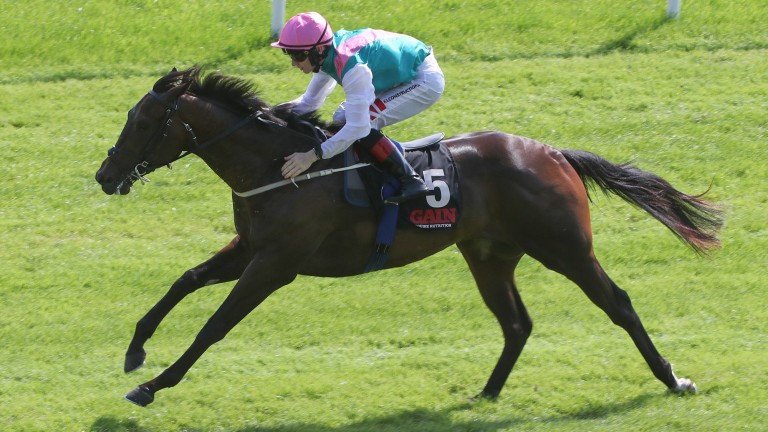 Making his way down to the start, a loose Mount Fuji did his best to knock Siskin off his game but Colin Keane and the colt remained cool before accounting for that rival's stablemate Monarch Of Egypt by three-quarters of a length.

It may be best to forgive Siskin for his Middle Park mishap but question marks over the trip persist, especially given how this race is shaping up on paper.

Aidan O'Brien once again has an enviable hand with six of the 11 runners, and a strong pace can be expected.

Make no mistake, Siskin faces his biggest test to date, and if he is to land a first Classic success for Lyons and Keane, the Ballydoyle battalion are going to make him earn it.

O'Brien, the most successful trainer in the race's history, is bidding for win number 12 in the race and jockey bookings and ratings would suggest Armory and Lope Y Fernandez are best placed to enter the winner's enclosure. 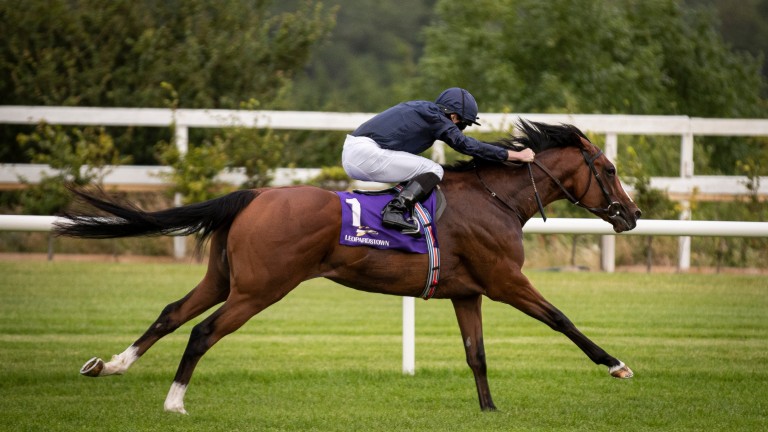 Armory: could be Siskin's biggest threat in the Irish 2,000 Guineas
Patrick McCann (racingpost.com/photos)

Away from Siskin and the Ballydoyle camp, the air has been full of talk about Jim Bolger's Fiscal Rules all week.

Bolger has never won the Irish 2,000 Guineas but his representative, beaten just a head by Wichita in a seven-furlong maiden here on his sole start last season, has been subject to some decent each-way support all week.

Michael Halford, bidding for a breakthrough Classic victory, is not without a chance with Sinawann either. It promises to be a cracker.

Aidan O'Brien, trainer of Armory, Fort Myers, Lope Y Fernandez, Monarch Of Egypt, Royal Lytham and Vatican City
Armory seems to be in good form and we were happy with him during the winter and through the spring. We have had our eye on this race for him for a long time. We're looking forward to seeing him run. Lope Y Fernandez won the Round Tower over six furlongs, so he is going into unknown territory with regards to the trip, but we have been happy with his work and he also seems to be in good form. Vatican City is a lovely horse. This is only his third run but we are looking forward to seeing what he is going to do. We've always thought he was a very nice colt.

Royal Lytham can race a little lazily, which is why we are fitting him with blinkers, but he has never run beyond six furlongs. He won the July Stakes over that trip and he's a lovely, relaxed horse so we'll learn a lot about him. Monarch Of Egypt is a horse we've always liked. He worked better than he showed on a racecourse last year but does have some nice pieces of form. It's a big step up in trip for him as well but we always felt he'd stay a mile. Fort Myers is a solid horse. He had a very good run in the Champagne Stakes last year and we felt the Curragh mile would really suit him. He's in good order and this type of race should suit him. 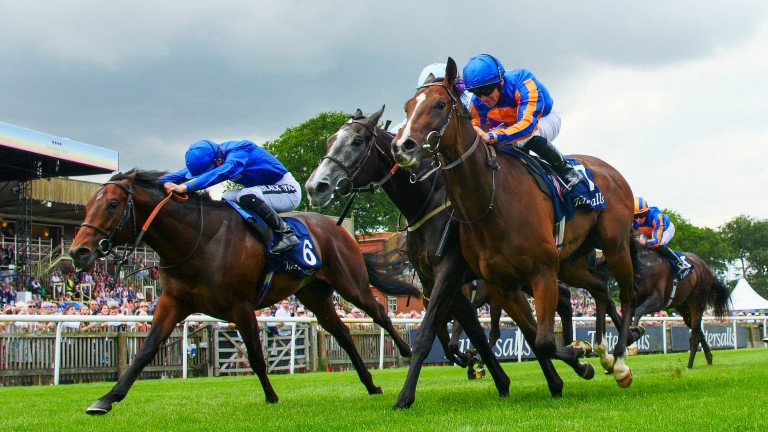 Jessica Harrington, trainer of Free Solo
He hasn't raced since he won his maiden at Leopardstown nearly a year ago but he's in great form. Ideally we would've liked to have got a run into him and I hope he won't be too ring-rusty.

Andy Slattery, trainer of Rebel Tale
He’s not a brilliant work horse but he seems to deliver on the track, and every time we ran him last season he just kept on improving. On his Futurity run, where he was less than a length behind Armory and closing on him to the line, he’s no 66-1 chance. I’d be hoping that Ballydoyle will look after Siskin and it should be a proper gallop, which will suit us. It would also suit if there was a bit more rain. We think our lad is a mile-and-a-quarter horse and we’d be hopeful that he’ll be staying on better than most in the finish.

Teddy Grimthorpe, racing manager for Prince Khalid Abdullah, owner of Siskin
He's been in good shape and has come through the winter well, and I think he will enjoy fast ground. It is slightly strange timing this year and we are not as knowledgeable as we'd like to be about where we all are. But Ger's horses have been running well, which is encouraging. There is plenty to suggest he can stay but of course it is a stiff mile and it is much different doing it at home than doing it on a racecourse. There is a lot of very good opposition in the race and there are no gimmes at this level. With regards to the Middle Park, I have watched that probably more than most, and obviously we spoke to Colin about it and I think the strange thing about that was that it was very out of character from the horse. He's obviously done stalls work since and there hasn't been any bother so I simply have to hope it was a one-off.

FIRST PUBLISHED 6:00PM, JUN 11 2020
There is plenty to suggest he can stay but of course it is a stiff mile and it is much different doing it at home and doing it on a racecourse

Aidan O'Brien is on course for one of his best years - and you'd hardly know it Fellowes warns controversial vet checks are deterring Melbourne Cup raiders Mother Earth continues O'Brien's French summer of love with Rothschild success Lyons team targeting Group races with Sacred Bridge after big payday Ryan Moore: 'I try not to offend anyone but for me it's always about the horses' Trainers' title race blown wide open - and we might just have a fairytale winner