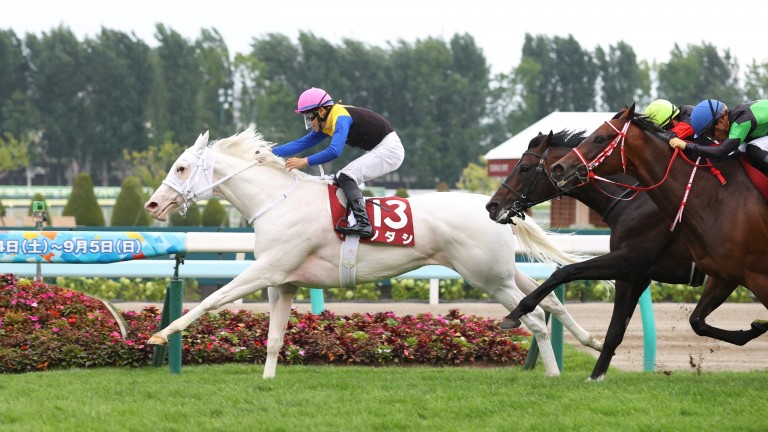 The all-white Sodashi and Hayato Yoshida take the Sapporo Kinen by three-quarters of a length
JRA
1 of 1
By Masakazu Takahashi UPDATED 12:18PM, AUG 22 2021

The distinctive white filly Sodashi made a winning return to the track on Sunday to fend off Prix de l'Arc de Triomphe hopeful Loves Only You in the Grade 2 Sapporo Kinen.

Sodashi and Hayato Yoshida travelled in second before hitting the front turning for home, then holding off the closing challenges from Loves Only You and Persian Knight to prevail by three-quarters of a length and a head.

The win at Sapporo was Sodashi's first against older rivals, and she was the only three year-old in the 13-strong field.

The filly rose to fame last year when becoming the first all-white horse to win at the top level when landing the Hanshin Juvenile Fillies in December.

Her fame climbed higher still when she won the Japanese 1,000 Guineas on her reappearance, but she then suffered her first defeat in the Japanese Oaks in May. This Group 2 success came after a three-month break to freshen up. She has now six of her seven starts.

The victory was the 100th Graded stakes success of her owner Makoto Kaneko, who is most famous for having owned the late Japanese legend Deep Impact.

Winning jockey Yoshida reflected: "I am relieved. She had the outside stall so I thought the start was important. She maintained her rhythm in the race and her response was very fine, it was like she was saying, 'I can move any time on your command'.

"The ground was right for her, and I had confidence we could quicken and get the front-runners from the home turn."

He added: "I couldn't meet fans' expectations in the Oaks, which was regrettable. But she has run well here on her return and I am looking forward to the autumn."

Loves Only You, who was a half-length third to Mishriff in the Dubai Sheema Classic in March, landed the QEII Cup at Sha Tin in April but was unable to justify favouritism against Sodashi on Sunday.

The five-year-old remains a general 33-1 shot for the Arc at Longchamp in October.

FIRST PUBLISHED 9:25AM, AUG 22 2021
The filly rose to fame last year when becoming the first white horse to win a Grade 1 in the Hanshin Juvenile Fillies in December