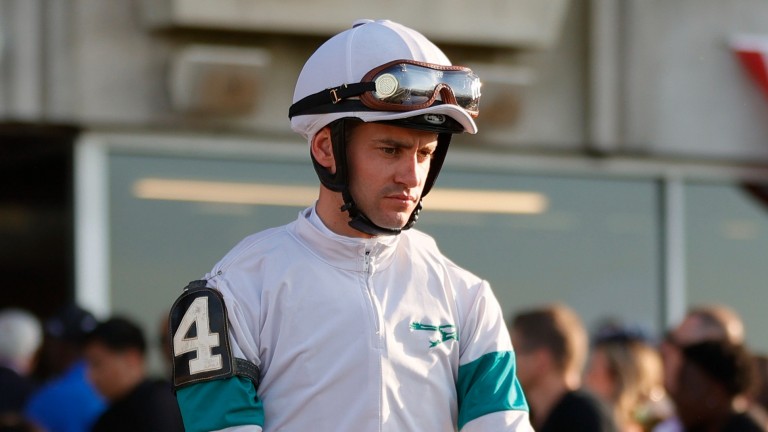 Hot Rod Charlie was denied victory after a hard-fought battle in the Grade 1 Haskell Stakes at Monmouth Park on Saturday, being judged by stewards to have caused rival Midnight Bourbon to clip heels and unseat jockey Paco Lopez.

Connections of the colt, who was demoted to sixth and last, believed the recently changed whip rules played their part in the incident. The New Jersey Racing Commission banned the whip at Monmouth Park, except for safety purposes, from May.

Mandaloun was elevated to first, handing the Juddmonte homebred, trained by Brad Cox, a debut top-level victory, although he could yet be promoted ahead of Kentucky Derby winner Medina Spirit, who tested positive for anti-inflammatory drug betamethasone.

The incident occurred in Monmouth's marquee race, when Flavien Prat made his challenge on Hot Rod Charlie in the home straight. He was on the outside of three runners before quickening past Midnight Bourbon and edging to his left to move beside Mandaloun.

But with his path now blocked, Midnight Bourbon stumbled after clipping heels with Hot Rod Charlie, sending Lopez out of the saddle and on to the track.

Hot Rod Charlie finished a nose in front of Mandaloun after a battle to the line, while both Midnight Bourbon and Lopez were reported to be fine after the race. 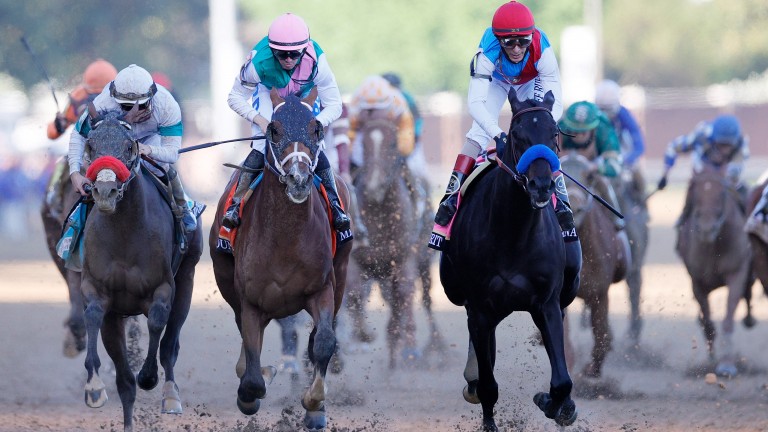 Mandaloun (pink cap): was second in the Kentucky Derby but could be promoted to first with the winner testing positive in a post-race drug test
Sarah Stier / Getty Images

Cox, quoted by Bloodhorse, said: "To be honest, I don't even think about what could happen with the Kentucky Derby any more. It's long gone. It's in the past. We just want to march forward with this colt. He's a good horse. We're proud of his performance today. He ran huge."

'Yes, the lack of a crop came into play'

Prat believed that if he had been allowed to use his whip normally it would have been possible to correct his mount, who started 4-5 favourite.

He said: "Yes, the lack of a crop came into play. I was trying to correct him as much as I could. If I could have hit him just one time left-handed, we would have been just fine, but it is what it is."

William Strauss, part-owner of Hot Rod Charlie, was in agreement with his jockey, though pragmatic.

He added: "Flavien has a good left hand and right hand so maybe if he hit him left-handed, he could have straightened him out, but that's not what happened. Nobody else out there could use a whip, so it's not an excuse. It's a level playing field that cost us the race.

"I haven't seen a replay but I'm sure it's the right call if the stewards made it. It's disappointing but welcome to the world of horseracing.

"We'll come back and get them next time. Charlie always gives us his best. I'm so proud of him."

The other Grade 1 at Monmouth, the United Nations Stakes, went the way of Toronado's son Tribhuvan, while Saratoga's top-flight race on Saturday, the Diana Stakes, ended in a 1-2 for Charlie Appleby courtesy of Althiqa and Summer Romance.

In a repeat of their positions in the Just A Game Stakes at Belmont previously, just three-quarters of a length separated the Godolphin runners for the $500,000 prize.

Appleby's assistant Sophie Chretien, also quoted by Bloodhorse, said: "We've been in America since May 1. We had two big targets in Grade 1s and we just couldn't do better.

"Summer Romance didn't take the rematch with Althiqa, who all the time she's been with us has become stronger physically and mentally. Summer Romance is a more nervous filly."

FIRST PUBLISHED 10:22AM, JUL 18 2021
It's disappointing but welcome to the world of horseracing