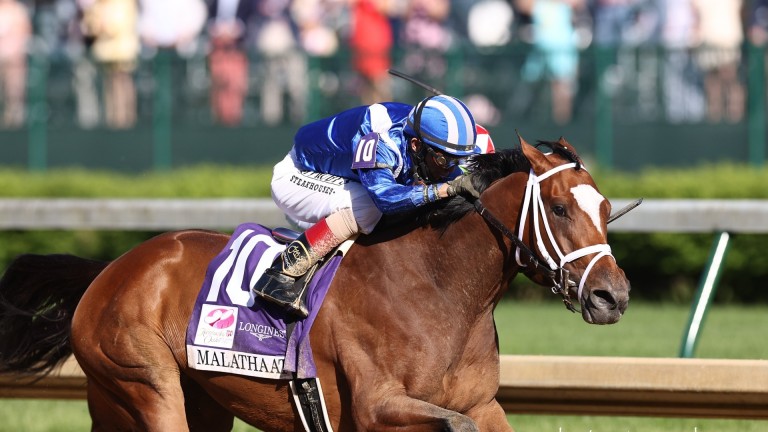 The Todd Pletcher-trained Malathaat went off at odds of 30-100 to extend her winning streak to six wins at Saratoga, but the dream ended when Maracuja edged past the favourite to strike by a head.

The success by the 147-10 shot contributed to the Saratoga folklore as a 'graveyard of favourites', and the mythos seemed to ring true as Malathaat – a distant seventh behind the favourite in the Kentucky Oaks – landed her first win since her maiden in April.

"All week I heard about the graveyard of favourites and I tried not to pay any attention to it," winning trainer Rob Atras told Bloodhorse. "I just wanted my filly to run her race and finish second or third and get a nice race into her.

"I was thrilled turning for home when it looked like she might be second but as the wire got closer she bore down and got up. It still hasn't set in that I won a Grade 1. To beat a filly as accomplished as Malathaat is special."

Malathaat broke quickly on the rail in the 1m1f contest to lead the four-horse field from the first turn. Maracuja joined the tussle as they quickened on the bend and reeled in Malathaat to hit the front in the dying strides of the race.

The success marks a first Graded win for owners Beach Haven Thoroughbreds, and only the third for New York trainer Rob Atras.

"I put a suit on for the Kentucky Oaks and Belmont Stakes Day and didn't have any luck, so I decided to put on a casual shirt like an underdog," Atras added.

FIRST PUBLISHED 1:47PM, JUL 25 2021
It still hasn't set in that I won a Grade 1 Stakes. To beat a filly as accomplished as Malathaat is special