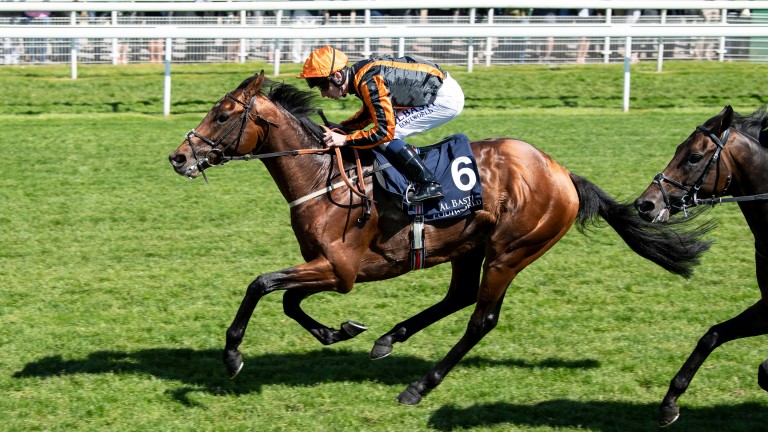 As Derby fever continues to build ahead of this year’s Classics at the Curragh and Epsom, Telecaster – one of last year’s leading fancies – roared back to form with a dominant performance in La Coupe under Christophe Soumillon, initiating a British-trained group race double at Longchamp along with Space Blues.

Telecaster spent much of last year in the wilderness having failed to reproduce his Dante exploits in either the Investec Derby or the Coral-Eclipse.

But the son of New Approach showed more on his return to action at Haydock behind Prince of Wales’s Stakes hero Lord North and was four lengths clear of Romanciere at the end of a race run virtually at breakfast time to avoid the Paris heat. 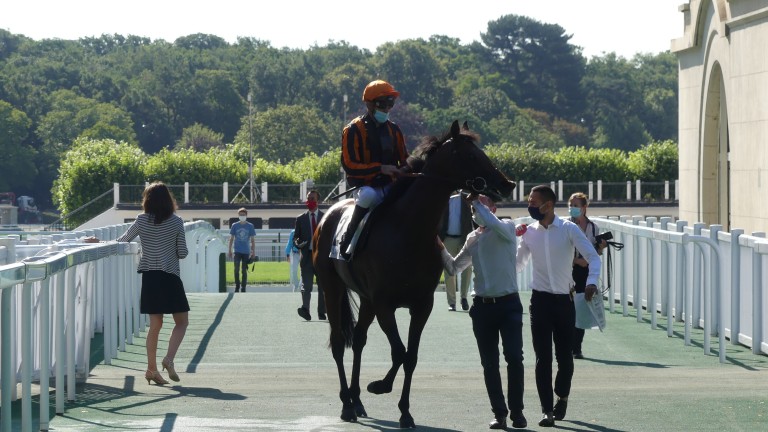 "It's nice to get him back, we've had a tough year with him," said Hughie Morrison, who skipped second lot to watch Telecaster, only to be frustrated as the early start time appeared to catch Sky Racing out. "He did so much last year in winning the Dante that, for a big unfurnished horse like him, it just emptied him.

"It's all credit to Mark Weinfeld and his sister Helena at Meon Valley Stud because they could have cut and run at any time. They have been incredibly relaxed and given him every chance to come back. He is up to competing in a Group 1."

Morrison said the contingency plan of the Eclipse in ten days' time will now not come into play but he will be aiming high as Telecaster proved much more tractable than has been the case off a decent pace set by Diamond Vendome.

Morrison said: "My travelling head lad, Tom Pirie, has done a great job riding him. He can hold anything. He lived and drank Marmelo for three years and he lives and drinks Telecaster. He's strong and he can hold horses that jockeys can't.

"It will be mile and a quarter Group 2s and Group 1s for him and hopefully a mile and a half might be within his compass. But as Christophe said, he's got so much pace. He has a very high cruising speed as he showed in the Dante last year.

"He is a horse we can travel now and the world is his oyster."

A return to Longchamp in October for the Prix de la Foret will be the ultimate target for Space Blues, who led home D’Bai for a Charlie Appleby one-two in the Group 3 Prix de la Porte Maillot over seven furlongs. 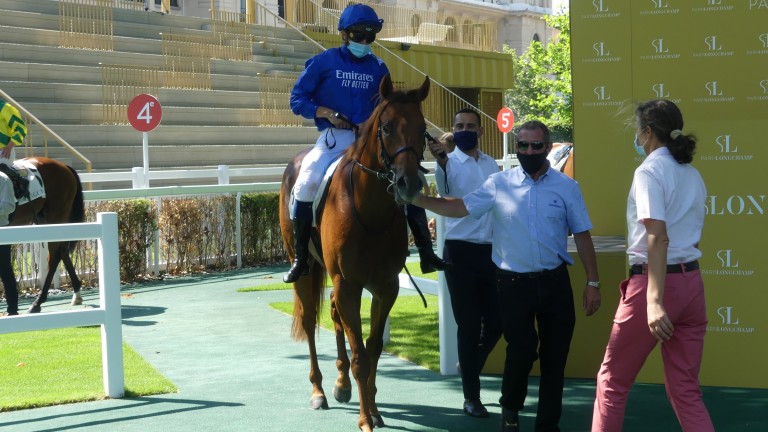 "We were confident going into the race off the back of his win at Haydock and this is his ideal trip," said Appleby. "As we saw last year he is a consistent horse at a high level, having been placed in the Jean Prat and the Maurice de Gheest."

Azano strung the field out from the start allowing Space Blues and Mickael Barzalona to slot onto the rail from his inside draw, before picking off their rivals on the long haul to the second winning post.

"We'll think about the Prix Maurice de Gheest for sure and there is also the Lennox at Goodwood. Potentially we'll work back from the Foret in the autumn. I think he’s a better horse with cut in the ground."

Telecaster and the Godolphin duo were the first runners from Britain to contest group races in France since they were reopened to foreign runners last week.

Both were able to overcome the quarantine restrictions still in place and Appleby will be hoping for more success in Paris on Sunday when Old Persian takes his chance in the Group 1 Grand Prix de Saint-Cloud.

Appleby said of the 2019 Sheema Classic winner: "He's in good order, the preparation has gone well into the race. His last run in the Breeders’ Cup was disappointing but if he brings his A game he deserves to be there and certainly doesn’t look out of place."

Old Persian will face a maximum of four opponents on Sunday, with the rejuvenated Way To Paris leading the entries ahead of Friday’s final declarations.

National Stakes next for 'professional' Master Of The Seas after Superlative win Andre Fabre in the Mishriff fan club after frustrating Victor Ludorum defeat Funeral for jockey Liam Treadwell to be held at Arundel Cathedral Godolphin blow after unbeaten Group 1 winner Quorto suffers fatal injury 'It feels great!' - Hollie Doyle celebrates first Group win with Dame Malliot The glory goes to Ghaiyyath but Enable fans have every reason to be pleased