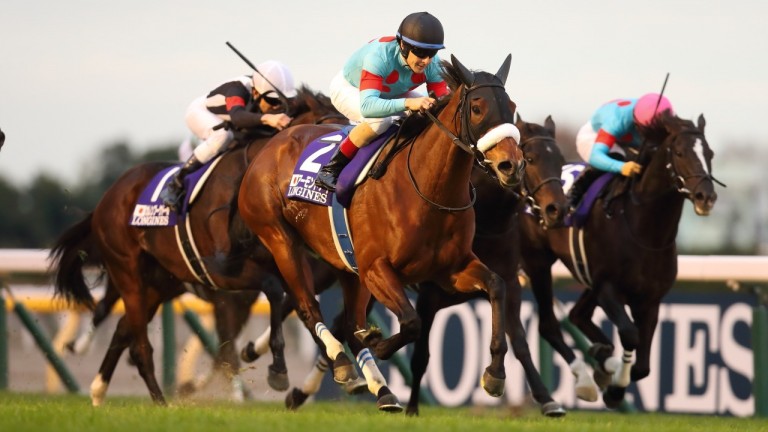 Almond Eye cemented her place among the Japanese racing immortals after charging home to win the Japan Cup on the final start of her career.

Almond Eye held a prominent position throughout the race at Tokyo, run at a furious tempo. On the swing for home front-running Kiseki held a huge advantage but, as he tired, Christophe Lemaire and Almond Eye powered up the centre of the track, hitting the front inside the final furlong and holding off market rivals Contrail and Daring Tact.

Almond Eye becomes only the second horse to win two Japan Cups, joining 2012 and 2013 heroine Gentildonna; the success is a third for Lemaire and second for trainer Sakae Kunieda. Almond Eye's previous victory had come in 2018.

"I'm very happy to win with Almond Eye again of course, but the most delightful thing is that it comes on her last run," said Lemaire.

"I was able to enjoy the race and it was special – she was Almond Eye as usual and so professional. I couldn't stop my tears last time because of the pressure of the record-breaking expectation, but today it was a sayonara party. She's the strongest horse in Japan."

Kunieda added: "The pace was ideal for Almond Eye and her response was totally different from that in the Tenno Sho. We did feel pressure but today all we wanted was for her to come back safe and sound.

"The victory is such a bonus, we couldn’t be happier. She's given us so much excitement and joy and it's been fulfilling to be part of her career. It would be great if I could be involved in training her progeny some day.” 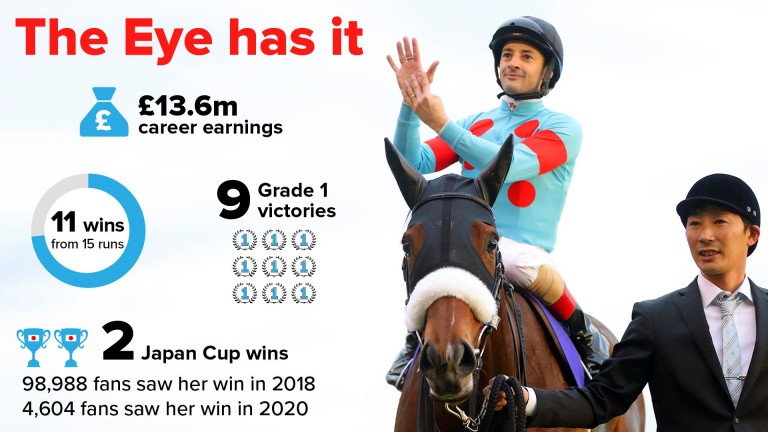 Runner-up Contrail was pushed out to 14-1 (from 8) by Paddy Power and Betfair Sportsbook for the 2021 Prix de l'Arc de Triomphe after losing his unbeaten record.

The Triple Crown winner made up a lot of ground from a midfield position but could get only to within a length and a quarter of Almond Eye.

Contrail's jockey Yuichi Fukunaga said: "He never gave up but Almond Eye was strong. The result was regrettable, but his condition was good and he showed his ability."

Daring Tact, a neck away in third, had also come into the race as an undefeated Triple Crown winner, having won the fillies' version.

Her rider Kohei Matsuyama reflected: "I think it was a good run to finish not far behind such strong horses, and I expect her to mature."

French raider Way To Paris added a welcome international dimension to the race, with the Andrea Marcialis-trained representative finishing tenth of the 15 runners. The Group 1-winning seven-year-old retires to Coolagown Stud in County Cork.

Betting turnover on the race was the highest this century at 27,274,334,600 yen (approx £194m/€215m), while having defeated two previously unbeaten champion three-year-olds, Almond Eye's official rating - previously 124 - will be awaited with interest.