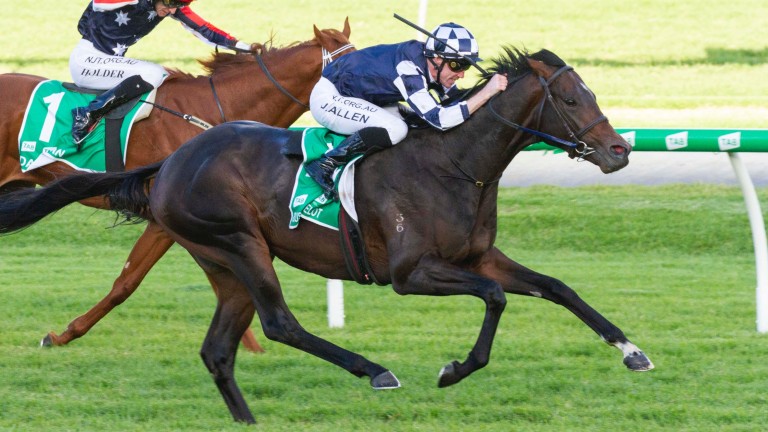 Russian Camelot is pushed out by John Allen to win the Australian Derby
AtkinsPhotography.com.au/ANZ
1 of 1
By Andrew Hawkins/ANZ Bloodstock News 7:22PM, SEP 14 2020

The 2021 Qatar Prix de l'Arc de Triomphe may be on the radar for the Danny O'Brien-trained Russian Camelot after a Melbourne spring campaign that is likely to include the Cox Plate and the Melbourne Cup.

Speaking on RSN927 radio on Monday morning, Russian Camelot’s part-owner John Wheeler said that the lure of only carrying 53.5 kilograms for the Melbourne Cup was likely to prove too enticing to pass up, although he admitted that could change if a breeding operation were to make a bid for the horse.

"It [the Arc] is my personal ambition and I've mentioned it in discussions with Danny, but not with the other partners," Wheeler said. "Without being presumptuous on their part, we think if the horse does perform this spring, he certainly will be racing in Australia in the autumn and we can look at races like the Ascot Gold Cup and then the Arc.

"Remember we would have gone for the Derby [at Epsom], but I think we're glad we missed it."

Russian Camelot, who returned from a four-month break to finish a head second to Fierce Impact in the Grade 1 Makybe Diva Stakes over a mile on Saturday, is the general 5-1 favourite for the Ladbrokes-sponsored Cox Plate on October 24, and is also vying for favouritism with Surprise Baby when it comes to the Flemington showpiece on November 3.

Australian participation in Europe's richest race has been rare, with Cox Plate hero Strawberry Road finishing fifth to Sagace at Longchamp in 1984, and So You Think going one place better behind Danedream in 2011 after being purchased by Coolmore and sent to Aidan O'Brien.

FIRST PUBLISHED 7:30PM, SEP 14 2020
He certainly will be racing in Australia in the autumn and we can look at races like the Ascot Gold Cup and then the Arc