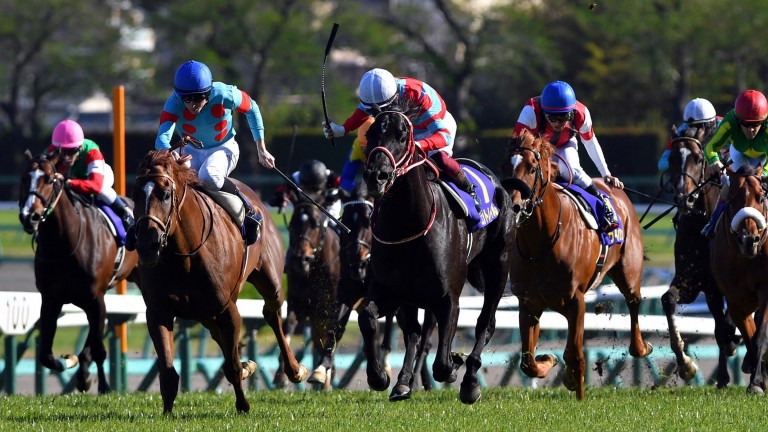 The cream of Japan's three-year-old crop rose to the top in Sunday's Japanese 2,000 Guineas, known as the Satsuki Sho, as the unbeaten Contrail managed to edge out Salios in a terrific clash of last season's champion juveniles.

The much-anticipated showdown saw the pair of high-class colts put their unblemished records on the line at Nakayama in the first leg of the Japanese Triple Crown, but it was trainer Yoshito Yahagi's star performer who followed in the footsteps of recent Satsuki Sho scorers Victoire Pisa, Orfevre and Duramente to register an impressive success.

Contrail, a son of much-missed legendary Japanese star Deep Impact (also a winner of the race in 2005), was settled in midfield by 43-year-old jockey Yuichi Fukunaga, while Salios raced slightly closer to the pace under Cox Plate-winning rider Damian Lane.

With a wall of 12 horses packed in front of him roughly three furlongs out, Fukunaga angled the 17-10 favourite out for some breathing room on the outside and the acceleration he showed over the next furlong and a half proved the key to victory.

Contrail swept by the field while going eight-wide on the bend to get on terms with the leaders at the top of the straight in the 1m2f Grade 1.

Lane had also gained a perfect split on the inner aboard the 14-5 chance and the race developed into a match between the pair, with Contrail always just looking as though he would edge out the Noriyuki Hori-trained runner-up, despite a game battle in defeat.

The surprise package of the race came in the shape of Hiroyuki Uehara's recent Grade 2 scorer Galore Creek, who managed to stay on to take third at 40-1.

"The race itself wasn't the way as I had expected," said winning rider Yuichi Fukunaga. "I actually had the idea of him racing further up in front as usual but as it turned out he wasn't keen to go up front early and I didn't push him so we were positioned much further behind going around the second corner.

"I had no choice but to change lanes to the outside after that, but with the way he was moving in the post-parade and the response once I took him to the outside I had every confidence in him entering the stretch."

Fukunaga added: "I thought we might pull away but Salios didn't let us win so easily. Winning the way he did today, I am confident that he has every reason to handle the extended distance in the coming Derby."

On the back of the half-length success, Coral made Contrail a 16-1 chance (from 25-1) for the Qatar Prix de l'Arc de Triomphe on October 4, while William Hill cut him from 33-1 to 20-1. Unibet were most impressed, making him 14-1 to become the first Japanese horse to win the French showpiece event.

A tilt at the Japanese Derby, known as the Tokyo Yushun, on May 31 will surely be next on the agenda for the Shinji Maeda-owned colt, with anticipation building that he could potentially go on to follow his sire's Triple Crown-winning heroics of 15 years ago.

One man who surely will have been watching on with interest is Ryan Moore, who partnered the first and second when they recorded top-level victories last season.

Where is racing still happening and when could countries start up again?

FIRST PUBLISHED 11:17AM, APR 19 2020
Winning the way he did today, I am confident that he has every reason to handle the extended distance in the coming Derby