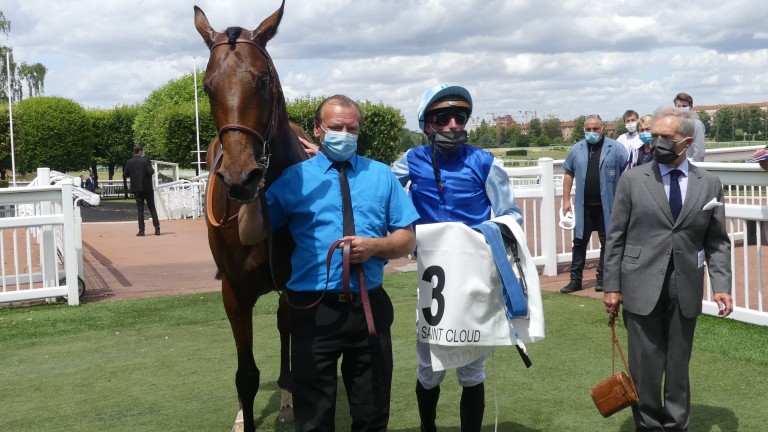 Persian King posted a first success since last season's Poule d'Essai des Poulains but was made to pull out plenty to hold Pretreville and Skalleti in the Group 2 Prix du Muguet.

The imposing son of Kingman looked a leaner specimen than when second on his comeback following injury at Chantilly three weeks ago and Pierre-Charles Boudot set out to give him a thorough workout, seizing the advantage from the off.

Halfway up the straight Persian King looked in danger of being overwhelmed by his attackers but knuckled down well to repel Pretreville.

The classy four-year-old is being aimed at a return to Group 1 company in the Prix d'Ispahan at Chantilly on July 19.

"I was pleased with what he did last time and satisfied that today he won in good style and moved very well," said Boudot. "I still had something up my sleeve. The others came at me early in the straight but he outstayed them.

"I don't think stepping up in trip would be a problem for him."

The Ispahan is over 1m1f and for this year only is open to three-year-olds, while Persian King's sole previous attempt at a mile and a quarter was in last season's Prix du Jockey Club, an inconclusive try given his subsequent health problems.

New subscribers can get 3 months of Members' Club Ultimate subscription for just £10 with promo code 3FOR10. Get exclusive tipping, unlimited video replays, exclusive interviews and much more. For more information, click here

FIRST PUBLISHED 2:01PM, JUN 28 2020
I still had something up my sleeve. The others came at me early in the straight but he outstayed them