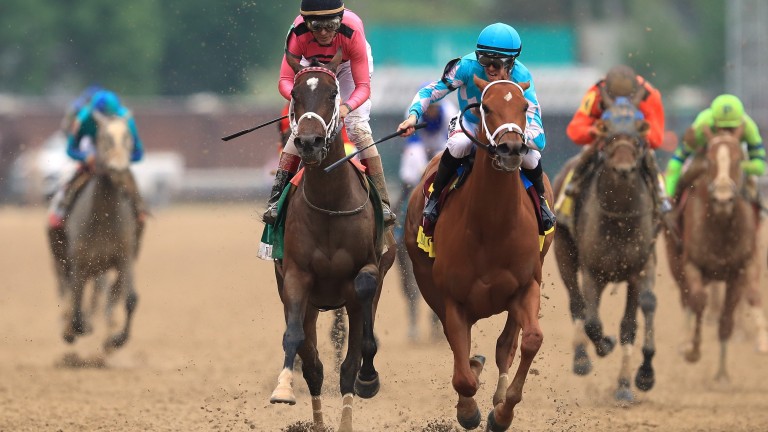 The Kentucky Oaks ended in a memorable success for Louisville native Brad Cox as Monomoy Girl (Florent Geroux) got the better of a terrific stretch duel with Wonder Gadot in front of a crowd of 113,510 at Churchill Downs.

The filly had to survive an inquiry after the runner-up's jockey John Velazquez lodged a foul claim – an objection, in other words – against the winner for alleged interference inside the final furlong.

But if this was a hometown victory, it was no semblance of hometown verdict from the stewards. Any change in the outcome would have been an injustice, for although 13-5 second favourite Monomoy Girl did indeed shift out when Geroux used the whip, she did not check her rival's progress one iota.

"She's just blessed with an unbelievable amount of talent," said Cox, 38, who grew up two blocks from Churchill Downs and dreamed of training horses beneath the Twin Spires as a child.

"What a horserace," added the trainer, whose only previous Grade 1 success came from the same filly in last month's Ashland Stakes at Keeneland. "She really had to battle – two really nice fillies hooked up at the quarter pole and she dug in."

Ridden hard by Geroux to get a position from the outside gate in a 14-runner field, the daughter of Tapizar prompted the pace before taking command on the far turn, only for 17-1 shot Wonder Gadot to launch a fierce challenge in the stretch. She got upsides, but Monomoy Girl pulled out more to edge out her rival and win by a half-length to take her career record to six wins from seven starts, stopping the clock in 1m49.13s. The favourite Midnight Bisou closing late and wide for third nearly four lengths adrift. 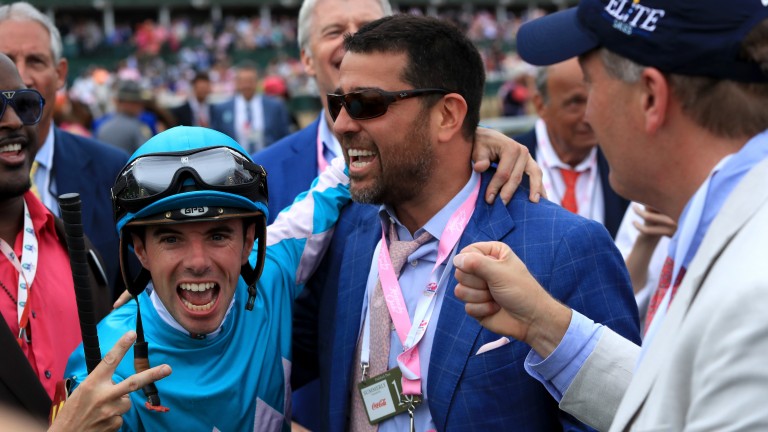 Celebration time: jockey Florent Geroux and Monomoy Girl's connections after winning the Kentucky Oaks
Getty Images/Sean M. Haffey
Winning jockey Geroux reported the filly, who is owned by a partnership featuring Michael Dubb and Sol Kumin, started to idle in front. "The filly was sharp early and I just hustled her out of the gate to get a good position," said the jockey, best known for his association with Gun Runner.

"From there I was pretty confident, but when I hit the quarter pole, her ears were flopping back and forth and she tried putting the brakes on me until she saw Wonder Gadot.

"When the other filly got head to head, I gave her a few slaps to keep her interested, but she can be quirky. You can get after her too much and she stops. I kept hand riding her and she pulled away at the end."

Disappointment of the race was UAE Derby runner-up Rayya, who did little to advertise the chances of her Meydan conqueror Mendelssohn in tomorrow's Kentucky Derby as she fell out of the stalls and beat only one home.

"I don't think she got to show what she can do," said jockey Drayden van Dyke.

"She hopped at the start and once she did that, I lost all chance. She’s a front-runner and doesn’t like to get hit with the kickback. It was all downhill from there."

Time is surely running out for last year's Kentucky Derby winner Always Dreaming, who tried to make all before fading tamely in the stretch for his fifth successive defeat since his crowning glory a year ago at Churchill Downs.

However, a new star may have emerged in the shape of four-year-old Backyard Heaven (Chad Brown/Irad Ortiz), who pressed the leader and then drew away smoothly to win by 4½ lengths from Hawaakom on his Graded-stakes debut.

"He's trained like a horse who will have no problem getting a mile and a quarter," said Brown. "We'll stretch him out from here. There are some really good races at a mile and an eighth. He has a nice race over the track here, so a race like the Stephen Foster is a logical spot. We have a really top handicap horse, so, of course, the Whitney in my backyard down the road."

A tepid pace proved the undoing of odds-on favourite Abel Tasman as last year's Kentucky Oaks winner was unable to quicken in the stretch on her seasonal debut, finishing only fourth behind old rival Salty (Mark Casse/Tyler Gaffalione). The winner wore down front-running Farrell to score by a length and three-quarters.

Things just did not work out for Rushing Fall, who had won her four previous starts including last year's Breeders' Cup Juvenile Fillies' Turf. Drawn on the outside, she was forced to race up with the pace and then locked horns with Daddy Is A Legend for the latter half of the race.

She finally mastered that rival in the last half-furlong, only for Toinette to swoop out ride and win by a neck, thereby completing a hat-trick since being switched to turf.

In a rough race, Royal Ascot entry Bucchero finished well on the wide outside but had to settle for third behind Will Call (Brad Cox/Shaun Bridgmohan).

FIRST PUBLISHED 11:34PM, MAY 4 2018
What a horserace...she really had to battle – two really nice fillies hooked up at the quarter pole and she dug in