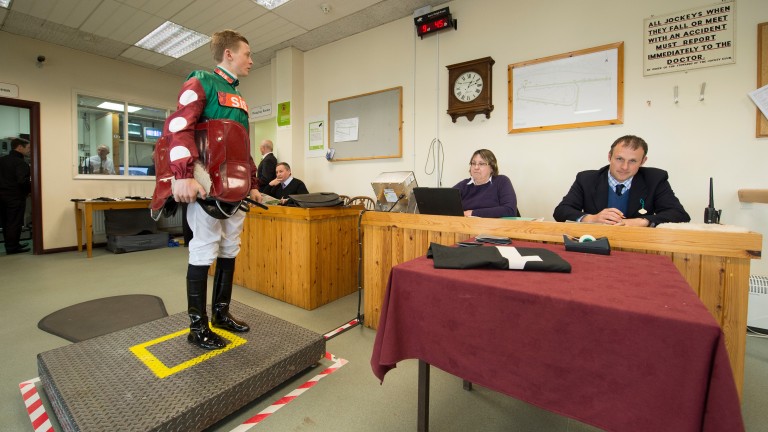 Racing Victoria have announced that the minimum weight for jockeys will return to 8st 7lb as of August 1
Edward Whitaker
1 of 1
By Andrew Hawkins 1:29PM, JUN 26 2020

The minimum weight for Victorian jockeys will return to 54 kilograms (8st 7lb) as of August 1, Racing Victoria announced on Thursday.

There was a push from the Victorian Jockeys Association to raise the minimum weight to 55 kilograms (8st 9lb) after 60 per cent of the membership voted in favour of pushing for a 1kg increase, but RV last night announced that there was not enough support for the move across the industry.

Due the Covid-19 pandemic the weights in Victoria were raised to 56 kilograms (8st 11lb), a concession due to jockeys not being able to use their usual methods to make weight, and RV chief Giles Thompson said that would remain until the start of next season (August 1) to give riders time to adjust.

“Victoria remains the only state with Covid-related increases to its minimum weights in place," Thompson said. "Following consultation with the VJA and ATA [Australian Trainers Association], it is clear that there is not a definitive push from all stakeholders to maintain the increases in perpetuity.

"To that end, we have determined that minimum weights for jockeys at all meetings will be returned to pre-Covid levels next racing season which will allow riders plenty of time to adjust. We will continue to review it based on the circumstances within the Victorian community."

Nicholl cited the fact that jockeys are already allowed to ride 0.5kg overweight, and with additional equipment not included that meant a rider could already get legged weighing as much as 1.4kg above the advertised weight in form guides. He also said trainers had concerns about smaller-framed horses having to carry extra weight.

Racing in Singapore to recommence from July 11

Hong Kong Group 1 prize-money boosted by £2.6m for next season

FIRST PUBLISHED 2:00PM, JUN 26 2020
We have determined that minimum weights for jockeys at all meetings will be returned to pre-Covid levels next racing season