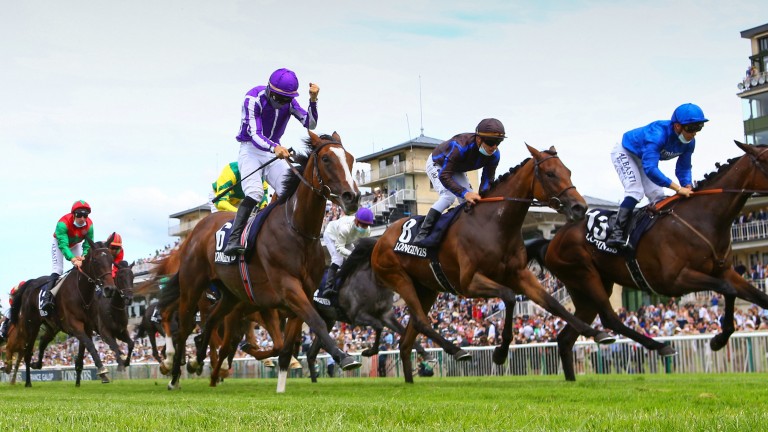 Ioritz Mendizabal (purple silks nearest the camera) punches the air after Joan Of Arc gave him a third Classic of the season
ScoopDyga/France Galop
1 of 1
By Scott Burton UPDATED 12:56PM, JUN 25 2021

Joan Of Arc added her name to the list of dazzling fillies with which Aidan O'Brien will attack the second half of the season, showing courage and class to run down Sibila Spain and win the Ballydoyle maestro a first Prix de Diane Longines.

O'Brien's third French Group 1 success of the season in partnership with Ioritz Mendizabal means he has now won every Classic in Britain, France and Ireland at least once.

With Prince of Wales's Stakes winner Love and Oaks heroine Snowfall both already confirmed as top class over the Arc trip of a mile and a half, O'Brien looks set to be well armed heading to Longchamp in October, with Paddy Power introducing Sunday's winner at 20-1 for Europe's premier all-aged prize.

Joan Of Arc stepped up from a mile for the first time having been nabbed on the line by stablemate Empress Josephine in the Irish 1,000 Guineas, though O'Brien does not believe the extended mile and a quarter is the limit of her stamina.

"Ioritz was really impressed with her and he thought a mile and a half was going to be no problem," said O'Brien. "He said she only got going with a furlong and a half to go. He said she would love stepping up in trip so it has to be a big possibility."

O'Brien reported Love to be in top shape having been ridden out on Sunday, with her work rider saying she did not look like she had a race.

On his star three-year-olds, he added: "We know Snowfall gets a mile and a half very well and obviously this filly has progressed with every run. They’re very exciting fillies."

Far from being the most physically imposing model in the parade ring, Joan Of Arc stamped her quality on the race late on having always been in the first four.

O'Brien said: "She has progressed with every run. She has a lovely mind, is very well balanced and has a big, long stride. I suppose what was very exciting about her today, she went through the line very well. As the distance grew she was really opening up."

Before this season O'Brien had endured no luck in either of the Chantilly Classics but just a fortnight after Mendizabal and St Mark's Basilica laid the ghost of the Prix du Jockey Club to rest, the 47-year-old won his first Diane.

"For me it's unimaginable and completely magical," said Mendizabal, who was also aboard St Mark's Basilica for the colt's win in the Poule d'Essai des Poulains at Longchamp in May.

"I was in a perfect position to strike but when I asked her for effort the leader wasn't coming back and I wasn't sure I would get there. She's a good filly and ran them down." 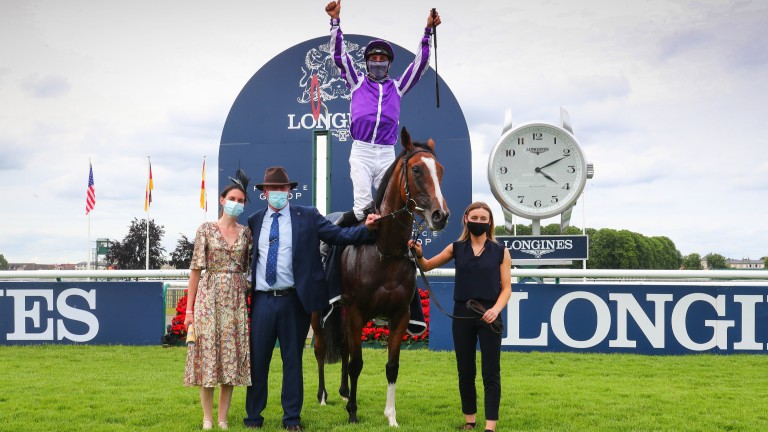 "Aidan O'Brien is my Father Christmas, he has brought over two crack rides for me, one colt and one filly. He never says 'do this, do that,' just ride them how you feel them.

"I love to ride like that. Look at the filly, she's run her race and she's completely relaxed like it was a piece of morning work. She deserves all the credit."

More to come from placed fillies

Mickael Barzalona had to wait to get out into the open aboard favourite Philomene before flying home late to snatch second, while stablemate Burgarita stayed on for third.

Andre Fabre said of the pair: "Philomene did finish well and she showed a beautiful action and a good turn of foot. I was pleased. She can go further.

"Burgarita was good in what was her third race. She was drawn a bit wide and on the bend she lost a bit of ground but that was good for first time in Group company."

Christopher Head must have dared to believe deep into the final furlong as Sibila Spain put in a courageous effort to be fourth under a fine front-running ride from Aurelien Lemaitre.

"The race went perfectly for her and it was a very high-level performance," said Head, who served his apprenticeship under his father Freddy and aunt Criquette. "I think there is more to come because she is still inexperienced, she never ran at two, so she will progress from here I hope."

FIRST PUBLISHED 3:13PM, JUN 20 2021
I suppose what was very exciting about her today, she went through the line very well. As the distance grew she was really opening up