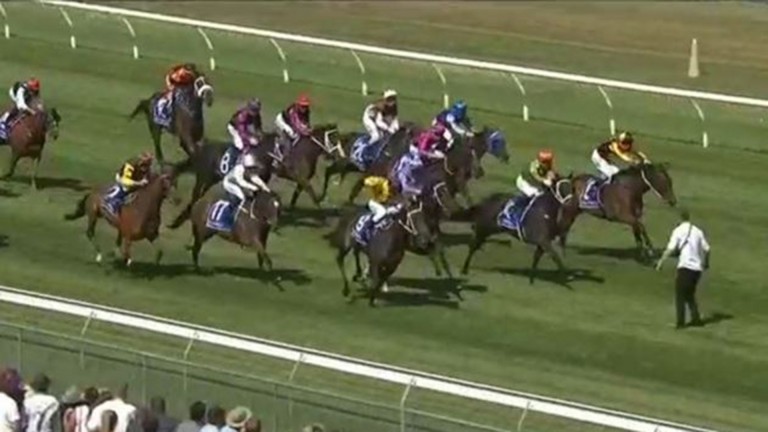 A racegoer put himself, runners and jockeys in danger by standing on the track during a race at Trentham racecourse
1 of 1
By Peter Scargill 2:00PM, MAR 4 2021

A man who jumped on to a racecourse in New Zealand during a race has been fined and handed 100 hours of community service after “an alcohol-fuelled moment of complete madness.”

Justin Bergman, 24, was sentenced on Thursday after pleading guilty to creating a criminal nuisance by unreasonably disrupting a public meeting, knowing it would endanger the safety of the public, and to disrupting a meeting at Trentham racecourse, near Wellington.

A court heard Bergman had been drinking all day during the meeting on January 30 and had unsuccessfully attempted to scare the horses in the pre-parade ring by screaming and yelling at them before later invading the course.

"He propped himself up on the barrier to look bigger and continued to make loud growling noises at passing horses," the police prosecutor said.

Bergman, who claimed to be an animal rights protester, told police he had been thinking about running on to the track all day and jumped three fences before standing in the way of the runners, forcing riders to take “evasive action” as they narrowly avoided hitting him. He then "lifted his arms towards the crowd in a victorious manner".

After pleading guilty, Bergman was sentenced to 100 hours of community work and 12 months of supervision, as well as being ordered to pay compensation of NZ$8,880 (£4,580/€5,300), the same amount that was lost to racing by bets being refunded on one of the runners in the race who was hampered by his actions.

Judge Craig Thompson said the incident received "intense publicity" and that Bergman "posed a very significant danger to the riders and the horses, and not least to you as well".

He added: "It can only be explained as an alcohol-fuelled moment of complete madness."

He said Bergman was apologetic straight away and had self-referred to alcohol and drug counselling.

Bergman declined to speak to the media outside the court, but told the New Zealand Herald that he was “remorseful” and regretted his actions.

FIRST PUBLISHED 2:00PM, MAR 4 2021
He propped himself up on the barrier to look bigger and continued to make loud growling noises at passing horses