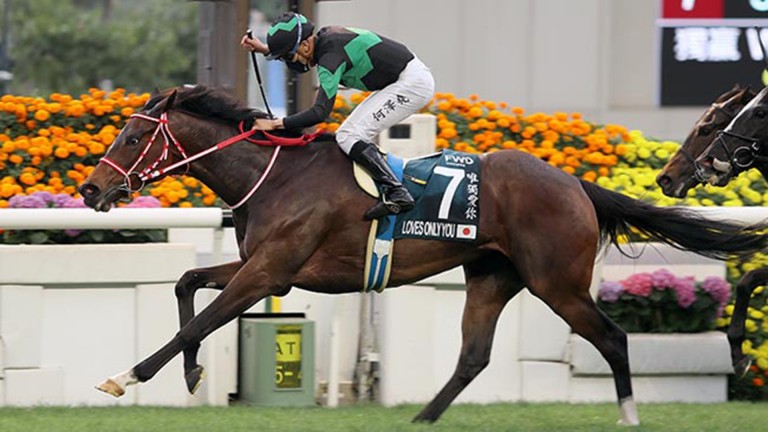 Loves Only You landed the QEII Cup as Japanese runners dominated the feature Group 1 on Hong Kong's FWD Champions Day at Sha Tin.

The five-year-old led the Japanese contingent home as they filled the first four places, and in doing so boosted the form of Mishriff, who beat Loves Only You in the Dubai Sheema Classic at Meydan last month for trainers John and Thady Gosden.

Loves Only You's victory secured a swift big-race double for jockey Vincent Ho following his triumph aboard Golden Sixty in the Champions Mile.

The winning rider said: "This is unbelievable. Thank you to the trainer and owner who asked me to ride her. I knew her form from Dubai would make her very competitive. The race was very smooth, the draw was perfect and she tried her heart out."

Hong Kong's racing superstar Golden Sixty enhanced his reputation as one of the world's most dangerous milers when recording his 14th consecutive victory in the Champions Mile.

The Francis Lui-trained five-year-old has been beaten only once in 18 starts and his last four wins all came at the highest level, although this latest success was far from his smoothest as he was chased all the way to the line by the fast-finishing More Than This.

Golden Sixty makes it 14 consecutive wins, holding off the fast-finishing More Than This to claim the G1 FWD Champions Mile under @Vincenthocy! #FWDChampionsDay #HKracing pic.twitter.com/N55pCAhgCm

The 1-5 favourite was forced to go widest of all round the home bend before being sent for home by Ho and just held on to win by a head.

Ho added: "That was exciting. We learned something new about him because he had never been chased before and when Joao [Moreira, riding More Than This] came on the outside he fought back. When he saw that he took off again so I’m very happy. He’s a superstar."

English trainer Richard Gibson won the first Group 1 of the day when Wellington bounced back to form in the Chairman's Sprint Prize.

After disappointing in the Sha Tin Sprint Cup this month, the four-year-old, ridden by Alexis Badel, powered home by a length and a half to increase is career record to seven wins from ten starts.

Gibson, who grew up in Northumberland, is in his tenth season in Hong Kong and was winning the Group 1 for a second time having previously scored with Gold-Fun in 2015.

Japanese star Danon Smash, who landed the Hong Kong Sprint under Ryan Moore in December, was sent off at 6-5 and finished sixth.

Broad use of stallions strengthens Godolphin's hand in Europe and United States 'This is a dream' - Zurekin a gallant third for the Leech team in Prix la Barka 'I wish the Cox Plate was in two weeks' - Zaaki stars for rookie Brit trainer Fury, lawsuits but 'no flailing away': how US no-whip racing has been received Why Frankel investment has turned out to be some coup for Evergreen Stud Farm A first for Aidan O'Brien as St Mark's Basilica dominates French Derby