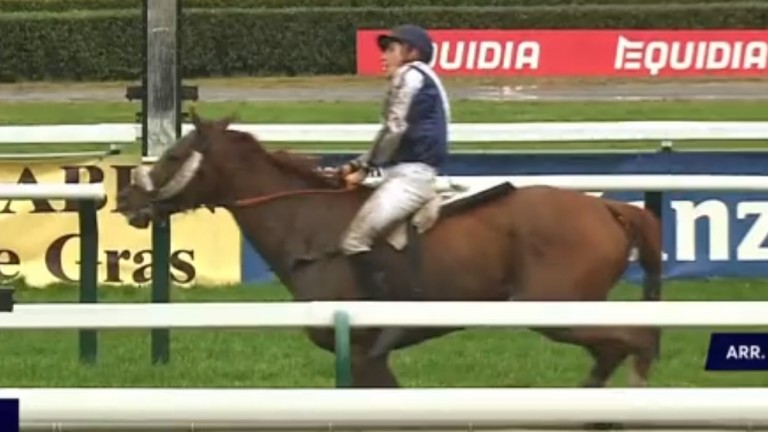 Paulin Blot completes a remarkable cross-country round at Pau minus saddle and stirrups
Equidia
1 of 1
By Scott Burton, France correspondent 4:01PM, JAN 10 2022

The cross-country course at Pau is widely regarded as one of the biggest jumping tests in European racing, with the fearsome Passage des Routes double of banks its signature challenge.

That challenge turned into a veritable mountain for Frascati Lagarde and rider Paulin Blot after the 34-year-old jockey lost both his saddle and his stirrups at just the third obstacle in the three-mile Prix Granel on Monday.

For Blot there was no question of calling it a day there and then. Not only did he and his faithful seven-year-old partner keep going, as the very heavy ground began to tire the legs of those in front Frascati Lagarde picked off his rivals and Blot's reward was to finish second – collecting a cheque for €10,800 in the process – at the end of a race that had looked over almost before it had started.

'I thought I'd keep going'

Trouble struck as the pair approached the Irish Bank on a good stride, only to have a rival jam on the brakes in front.

"He jumped up on to the bank very well and then a horse in front of us slowed right up," said Blot. "My horse dived to the right and I went with him and the saddle slipped straight away.

"The next fence came up pretty quickly and we cleared that okay and I thought I'd keep going. I felt before the race we had a chance and he acts round there, so I thought it worth persevering."

After jumping the final double Frascati Lagarde was still back in fifth but as they turned back towards the stands for the last time Blot began to urge his mount into the race.

"As we started to pass horses turning for home he really got a boost to his morale and he went after the others," Blot added. "He's very professional and he knows Pau by heart. I could squeeze with my legs but really it was all down to him and he knows his job.

"I felt James Reveley's horse was the one to beat so once we passed him I was determined to keep pushing.

"There are plenty of twists and turns on the track and the trick is to know how to position your weight when you don't have stirrups. I managed to do that and to keep my movements to a minimum."

The commentary teams on both Equidia and Sky Sports Racing were alive to what was unfolding, with pundit and former French-based jockey Jacob Pritchard Webb stating: "It's an incredible achievement for the jockey to even finish the race. There's prize-money down to fifth, so he wasn't going to pull up but to finish second is brilliant."

While TV viewers were left amazed, for Blot there was no doubt how his achievement was received on track.

"I've never received an ovation at Pau like today," said Blot. "Okay, I haven't ridden 50 winners there but even so, to be applauded from the stands and then when I weighed in was quite something, and I received a bottle by way of congratulations from the racecourse president."

FIRST PUBLISHED 4:01PM, JAN 10 2022
He's very professional and he knows Pau by heart. I could squeeze with my legs but really it was all down to him and he knows his job