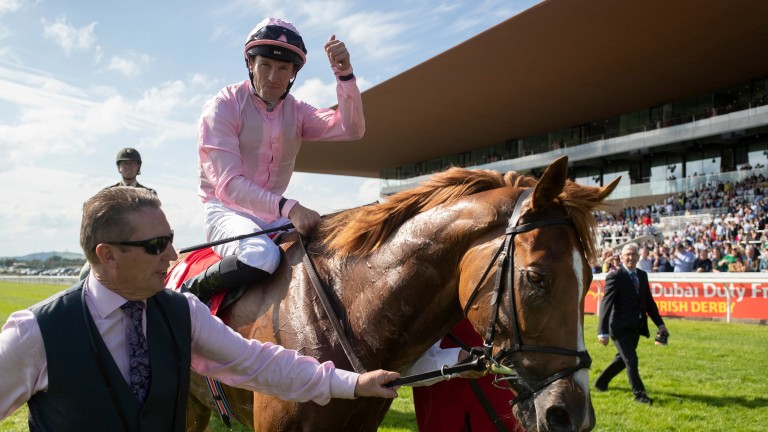 Sovereign: could finish only seventh on his debut for new trainer Chad Brown
Patrick McCann
1 of 1
By Matt Rennie/Bloodhorse.com UPDATED 10:26AM, MAY 9 2021

The 2019 Irish Derby winner Sovereign endured a tough start to his racing career in the US as he finished a well-beaten seventh behind Channel Cat in the Man o'War Stakes at Belmont Park on Saturday.

The five-year-old, who landed a shock 33-1 front-running victory in the Irish Classic, made his first start for new trainer Chad Brown following his switch from Aidan O'Brien, with his last run for O'Brien coming when third in the Bahrain International Trophy last November.

Despite being sent off the 12-5 second favourite to make a winning US debut, Sovereign broke slowly and found little under pressure before eventually fading to be beaten six and a quarter lengths, with Field Pass the only other rival to finish behind him in the 1m3f contest.

Sovereign's defeat means he has not got his head in front since landing the Irish Derby under Padraig Beggy at the Curragh nearly two years ago.

Velazquez guided the son of English Channel to a nose victory over 6-4 favourite Gufo and gave British-born trainer Jack Sisterson the third top-level victory of his career.

Sisterton, originally from Durham and who has been in the US for around 16 years now, said: "I didn't sleep last night. I wasn't nervous about Channel Cat, I was nervous about letting John Velazquez down. I didn't want to ruin last weekend's celebration, so thanks to Channel Cat for stepping up and doing all the hard work.

"Thanks to Channel Cat and the staff back at the barn, who do all the hard work to win a Grade 1. I don't take any credit for this. It's all due to the people behind the scenes that people don't see."

Voice of Tampa Bay hangs up mic after staggering 37,587 calls in 37 years

FIRST PUBLISHED 9:00AM, MAY 9 2021
I didn't sleep last night. I wasn't nervous about Channel Cat, I was nervous about letting John Velazquez down