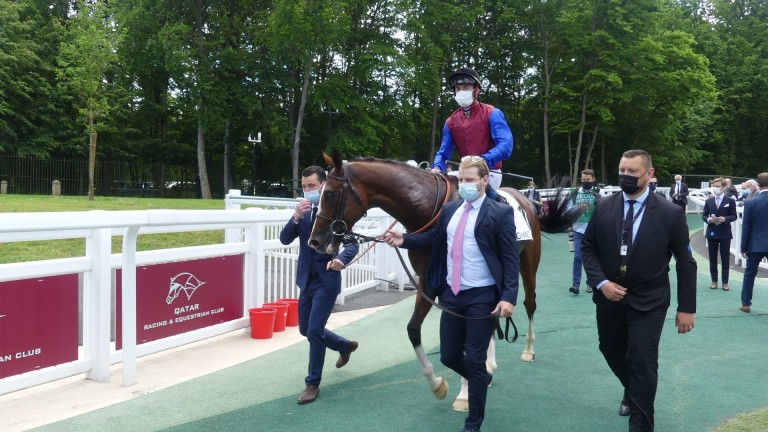 In Swoop returns after a hard-fought success in the Grand Prix de Chantilly
Racing Post/Scott Burton
1 of 1
By Scott Burton 7:02PM, JUN 6 2021

Francis Graffard and owners Gestut Schlenderhan enjoyed the fruits of their decision to stay at home rather than tackle last Friday's Coronation Cup as In Swoop and Olivier Peslier battled to success in the Group 2 Grand Prix de Chantilly, denying Sublimis and Vaucelles by half a length.

Coral left last year's Arc runner-up unchanged at 14-1 for the 2021 edition in October but connections will first weigh up whether to travel to Ascot for a crack at the King George in July.

The moderate pace was hardly designed to suit In Swoop – a strong stayer at this mile and a half trip – but he responded gamely when Peslier pulled him wide to challenge up the straight.

"It was a a very tactical race and he prefers a good rhythm, and I think that contributed to the impression that he took a while to get on top," said Graffard. "Olivier was very pleased with him and he's made a lot of progress in the last three weeks, getting stronger all the time.

"He's engaged in the Grand Prix de Saint-Cloud and will also have an entry in the King George, so I'll sit down with the owners and make a plan."

There were those who may have questioned Pascal Bary's decision to swerve the Poule d'Essai des Pouliches with Tahlie after the victory at Longchamp of Coeursamba, a filly she had beaten on a previous start in April. 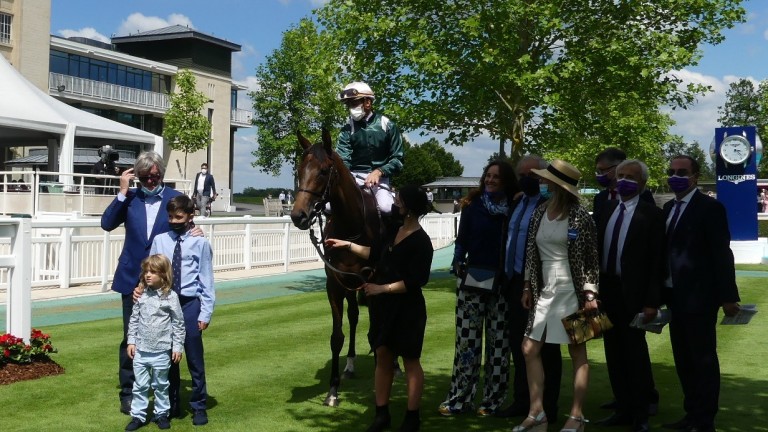 That thought may have been reinforced in Sunday's Prix de Sandringham, as the third horse in the Classic, Kennella, ran home strongly but was never able to get to Tahlie.

But the vastly-experienced trainer was happy to be proved right in the long run as the daughter of Rio De La Plata continues her march up the ranks of three-year-old fillies over a mile.

Bary said: "She's very well balanced and has a great will to win, she always gives her best. She's a dream to train and she'll be prepared now for the Prix Rothschild at Deauville."

Thunder Drum is bred to thrive over a mile and a half and so it proved as Lady Bamford's daughter of Galileo and Great Heavens took her form to a new level in winning the Group 3 Prix de Royaumont under Eddy Hardouin.

She continued the red-hot run of Jerome Reynier, following on from the Prix d'Ispahan success of Skalleti seven days ago, recording the stable's fifth Group win of the season.

Expert Jury: 'I'm not sure a slog in the mud would suit St Mark's Basilica in the Arc'

FIRST PUBLISHED 7:02PM, JUN 6 2021
Olivier was very pleased with him and he has made a lot of progress in the last three weeks, getting stronger all the time