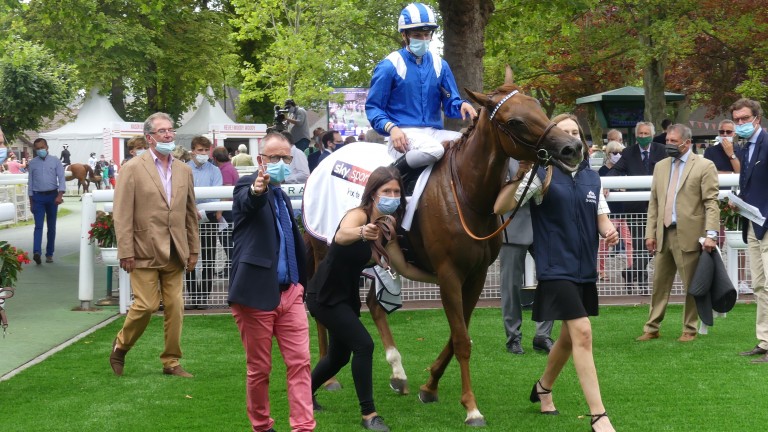 Longhamp this way, madame: Raabihah received quotes of 20-1 for the Arc after dominating the Prix de Psyche at Deauville
Racing Post/Scott Burton
1 of 1
By Scott Burton UPDATED 8:28PM, AUG 1 2020

At the end of a week in which the royal blue silks of Hamdan Al Maktoum have dominated Goodwood thanks to the efforts of Mohaather and Battaash, Raabihah put the icing on the cake when outclassing her rivals in the Group 3 Prix de Psyche Sky Sports Racing.

Such is the belief shown by Jean-Claude Rouget in the daughter of Sea The Stars, it would be a brave bookmaker that offered odds against her not being the most celebrated of the trio by the end of the season, given her trainer's estimation that Raabihah is "the best filly I have trained since Stacelita."

Rouget confessed he had been sorely disappointed at the way the Prix de Diane unfolded where an unusually languid pace dictated by the three Irish-trained fillies left Raabihah marooned at the back before charging home to be fourth behind Fancy Blue.

"She is clearly a Group 1 filly and it's a real shame to miss out in the Diane, which was only her third race," said Rouget. "She lacked experience and Cristian [Demuro] dared not make more use of her.

"Today there was Raabihah and then the rest and I think she's the best filly in France. But that [a mile and a quarter] is not her trip and it's only her class that she is getting by on. Her second and third dams both won the Oaks and we'll look at the Arc with the Vermeille in between.

"I haven't trained a filly as good as her since Stacelita and that was why I was so down after the Prix de Diane. You never have two chances at a race like that."

Such a statement needs to be taken seriously, since that places Raabihah above such luminaries as La Cressonniere, Avenir Certain and Qemah in the Rouget hierarchy.

Raabihah was widely available at 33-1 before the Pysche and, with the Diane form looking strong and the promise of better to come when upped to a mile and a half, the revised 20-1 might not be considered an overreaction.

Wangari was three and half lengths back in second while the Rae Guest-trained Arriviste was just denied black type back in fourth after setting a decent pace under Stephane Pasquier. 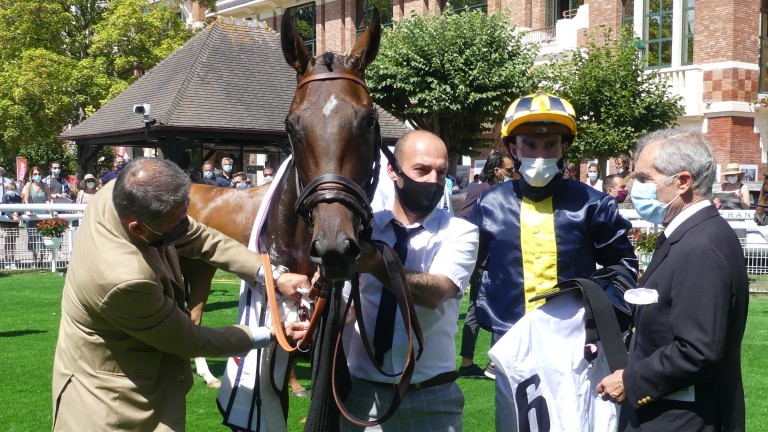 Earlier the silks of Sean and Bernadette Mulryan were in the number one spot after See The Rose made it three from three when outpointing the Charlie Appleby-trained Wedding Dance to land in the Prix Six Perfections in the style of a good filly.

"She has a fine physique and a good mind, as well as plenty of gas," said Pierre-Charles Boudot. "Her first two runs were on straight tracks but I think running the bend helped her."

Another British trainer who had to settle for the runners-up spot was Robert Cowell, after Rocket Action just failed to catch Air De Valse in the Listed Prix du Cercle over five furlongs.

FIRST PUBLISHED 6:21PM, AUG 1 2020
I haven't trained a filly as good as her since Stacelita and that was why I was so down after the Prix de Diane.

Group 1 sacrifice: Billy Lee accepts quarantine to keep Romanised partnership It's still her favourite day! There's no Shergar Cup but Turner dazzles again 'Every year it felt like we'd have a top-class horse': 40 years of Sheikh Hamdan Hollie Doyle continues hot streak as Maystar returns to form in Listed test Pinatubo showdown could be next for Space Blues after Gheest glory Port Guillaume adds another string to Rouget's Arc bow with Hocquart success