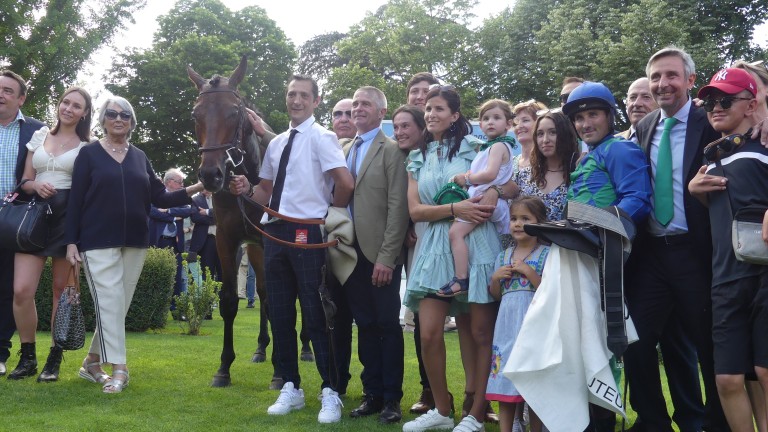 Winning connections with Hermes Baie after his commanding victory
Racing Post/Scott Burton
1 of 1
By Scott Burton, France correspondent UPDATED 7:54AM, MAY 23 2022

France's champion trainer Francois Nicolle landed a third Champion Hurdle in five years, although arguably not with the horse most had expected as Hermes Baie delivered a knockout blow to his rivals while reigning Queen of Auteuil L'Autonomie came home 12 lengths behind her stablemate in third.

Splitting the pair was Klassical Dream, who looked long odds against getting involved for much of the three miles one and a half furlongs as he struggled to keep tabs on the main group.

Trainer Willie Mullins paid tribute to the horse's bravery in fighting his way back under Paul Townend to beat all but Hermes Baie, who was still seven lengths in front at the line. 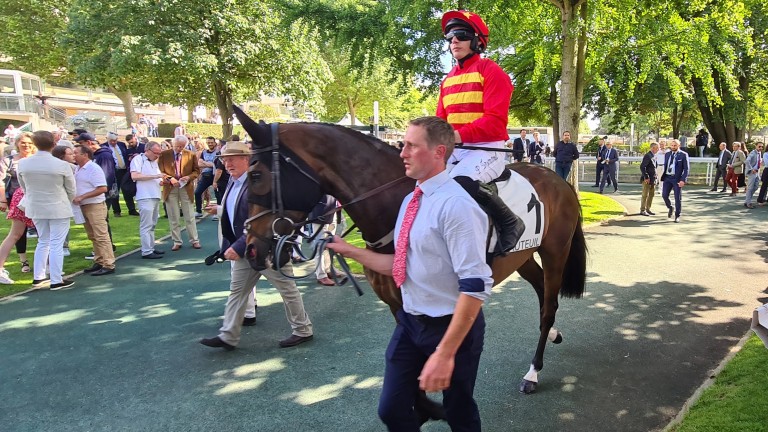 Armed with his usual hood, Klassical Dream prowled the parade ring before the race, Townend not mounting until his seven rivals had already headed out.

Mullins revealed that the headgear, which has been part of the campaign to get the six-time Grade 1 winner to settle over staying trips, was a key element in his troubled passage through the race.

"We were just hoping to settle him but I'm not sure he faced his hood in this heat," said Mullins. "He was very dead in himself and Paul felt halfway through the race he might not finish.

"He seemed to get a change of heart in the second-half of the race and got into it. Watching where he was at halfway I was very pleased that he finished second. I thought he was going to be worse than fourth so it was a very brave run."

Mullins added: "In this heat it's very hard. I had a lighter hood for him but it wasn't sitting on him properly and then we changed back before the race."

Klassical Dream's stablemate Kemboy made a bold bid under Rachael Blackmore but was caught for speed by the principals turning out of the back straight and finished sixth, while Tornado Flyer was never travelling at any stage and came home seventh.

But the day belonged to Nicolle and Bertrand Lestrade, who has won the last two Grand Steeple-Chase de Paris but does not have a ride in Sunday's big race.

"Bertrand was pretty ambitious taking on the mare down the back there but only the real 'cracks' can do what Hermes Baie has done today," said Nicolle.

"L'Autonomie had progressed a lot from when they met three weeks ago and look what he's done to her there. I didn't give Bertrand any orders other than not to let him switch off too much otherwise he would forget to wake up.

"I'll talk with the owners about the autumn but I'd probably opt to stay over hurdles with him."

FIRST PUBLISHED 6:33PM, MAY 21 2022
Watching where he was at halfway I was very pleased that he finished second. I thought he was going to be worse than fourth so it was a very brave run

Deauville date set for Australia's darling Verry Elleegant's European debut British racing faces a struggle to win over the public - not to mention owners Titleholder 16-1 for Arc after shattering course record in Takarazuka Kinen Alec Head: a giant of modern racing and father and mentor to more French greats The remarkable facts and figures behind Alec Head's achievements in racing French racing great and multiple Arc winner Alec Head dies at the age of 97