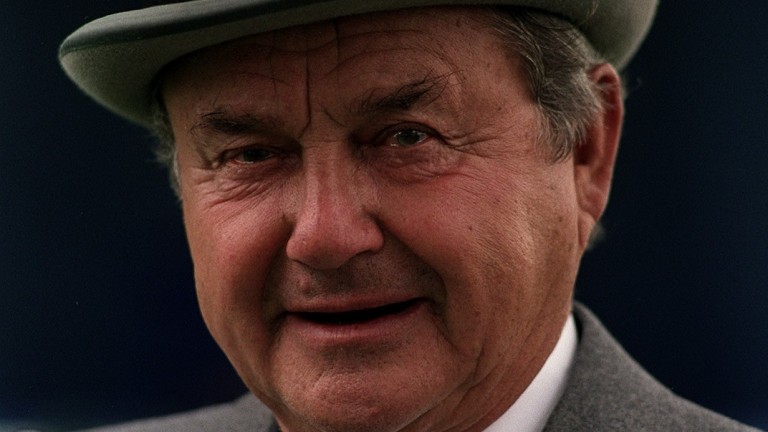 Alec Head, one of the key figures in French racing for more than 70 years, has died at the age of 97.

A highly successful trainer with four wins in the Prix de l'Arc de Triomphe to his name, Head was also an influential owner and breeder, while his children Freddy and Criquette and his grandson Christopher have continued one of the most remarkable dynasties in the racing world.

In the post-war era Head dominated French training alongside Francois Mathet and enjoyed huge success in Britain and Ireland, with Lavandin's victory in the 1956 Derby the highlight.

In 1981 his fourth and final Arc victory came courtesy of Gold River under Gary Moore for longtime supporter Jacques Wertheimer and even after his retirement three years later his influence remained huge.

In 2013 his homebred Treve won the Prix de Diane, Prix Vermeille and Arc for Criquette, with the Arc success being repeated 12 months later before defeat as evens favourite when going for the hat-trick in 2015.

In November 2014 Head was accompanied by Freddy and Criquette to London to receive the Sir Peter O'Sullevan Award as 'La Famille Head.' The same year he was also honoured with the International Federation of Horseracing Authorities Award of Merit, while in 2000 he was created a chevalier of the Legion d'Honneur, France's highest civilian award. 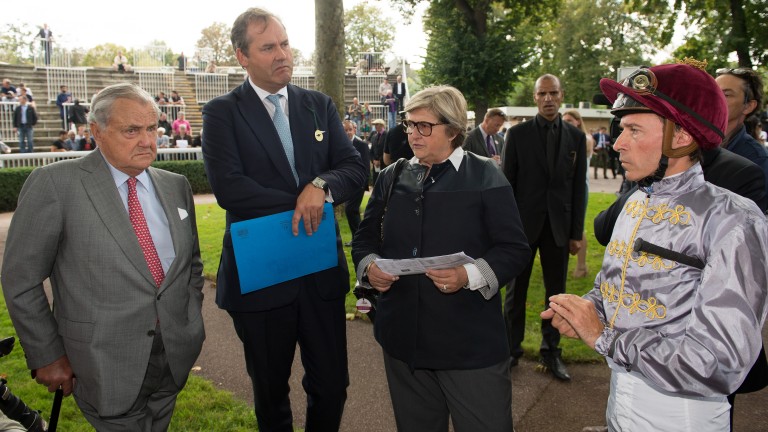 Thierry Jarnet rode Treve in all three of her Arcs but has an association with the family going back to his very first days in the saddle in the mid-1980s.

"I've been involved with the Head family for as long as I've been in racing and when I started riding and was still a kid I won in both Alec and [Head's wife] Ghislaine's colours.

"He had such an understanding for the horse when I was lucky enough to be riding Treve towards the end of my career, he would always come back to France in the summer.

"He always used to call me up and ask me to come by Criquette's stable or the stud farm to have a look at the yearlings or the two-year-olds – it was wonderful. It was a ritual and every time we ran into one another, he would always invite me to come and do the rounds in the yard."

He added: "Every trainer has their own jockeys but whenever there was a chance to ride one of the Head family homebreds, Criquette or Freddy would always call me up."

In 2014 Treve's road to the defence of her Arc title was paved with disappointment but, even after she could finish only fourth in the Vermeille, Head retained his cast-iron belief in the filly, telling both Criquette and his longtime friend O'Sullevan he was convinced she would win the Arc.

Jarnet recalled: "And when Treve won the Arc I'll always remember the tears of joy in Alec's eyes." 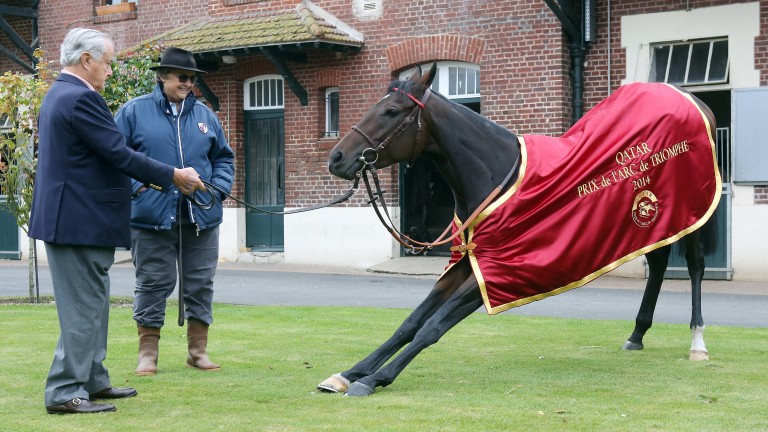 Head first began training for Pierre Wertheimer at the age of 24 in 1949 and the famous blue and white silks – later inherited by Jacques and finally Alain and Gerard Wertheimer – were carried by a number of his most important winners.

In addition to their Arc triumphs with Ivanjica and Gold River, and the Epsom success of Lavandin, the Head/Wertheimer combination raced such crack milers as Lyphard and Green Tune.

Speaking on behalf of Alain and Gerard Wertheimer and the entire operation, racing manager Pierre-Yves Bureau said: "A huge part of the story of the Wertheimer stables remains tied with that of Alec Head, whose role ran from that of trainer to adviser and who not only contributed a large number of victories but also made a major and permanent contribution to the broodmare band. We all share the pain of the Head family."

In addition to both his glittering training career and raising two more monumental figures in French racing in Freddy and Criquette, Head was a keystone of French breeding through his purchase of Haras du Quesnay near Deauville in Normandy.

Vincent Rimaud has run the stud and stallion station for two decades and recalled Head being demanding but always fair on his long stays when visiting from his retirement home in the Bahamas.

"My sadness comes from the fact that he has died without me seeing him since before Covid," Rimaud said. "Every time he came to Le Quesnay he would roam around the entire farm. With all of us that worked here it was always 'Monsieur and Madame', never boss. 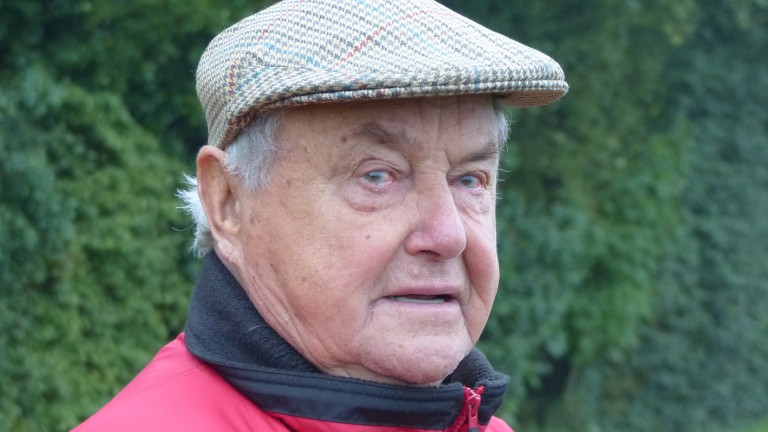 "He knew so much about horses and there weren't too many days when I didn't learn something by his side. He was always looking for something new."

Rimaud recalled: "He would arrive in the mornings and say, 'Vincent, I've had an idea'. I'd raise my eyes to the heavens and think, 'What's he up to now?'. But that was him. He was always trying things out.

"He was ahead of his time in so many ways and when he brought a stallion to Le Quesnay, he always had in mind what would work with our mares. Just look at the stallions we've had here and you'll realise what an eye for horses he had.

"He knew every mare on the farm by name and he would caress them. His feeling for horses was extraordinary."

A lifetime of friendship with Sir Peter O'Sullevan

They were great mates over a lot of years and it was a very enduring friendship between Peter and Alec and also Vincent O'Brien. The two relationships worked in tandem and I think when Alec and Vincent retired their holiday homes in the Bahamas were quite close. It was a tripartite friendship.

Peter put forward a very compelling case for Alec and the Head family as recipients of his award for all they had done for French and British racing. 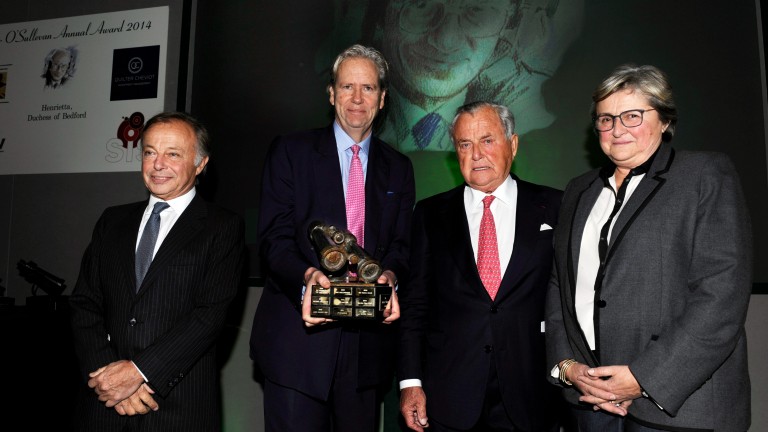 His great sadness was that he wasn't well enough to go to the lunch. Alec was very emotional at the Dorchester when he received the award and after the event I organised a car to take him – along with Criquette and Freddy – round to the Peter's flat in Chelsea, and they celebrated there.

They were great confidants and I remember all the drama surrounding Treve ahead of her second Arc, when she'd been beaten and had supposedly been working badly. Alec rang Peter one day and told him she's done a piece of work and that he should be sure to avail himself of the 20-1. Of course she went on to win. Peter called me and I thought 'that's a leap of faith.' But their friendship was so entrenched.

It was very ironic that Peter died about half an hour before Freddy won the Sussex Stakes with Solow in 2015. I got the phone call just after the presentation and I asked Freddy to pass on the news to his mum and dad before jumping in the car to drive back to Chelsea.

There was a real bond between them.

Alec Head obituary: a giant of modern racing and father and mentor to more French greats

The remarkable facts and figures behind Alec Head's achievements in racing

FIRST PUBLISHED 2:00PM, JUN 22 2022
When Treve won the Arc I'll always remember the tears of joy in his eyes

Deauville date set for Australia's darling Verry Elleegant's European debut Titleholder 16-1 for Arc after shattering course record in Takarazuka Kinen 'I wasn't the best jockey who rode for Alec, but I have a lot of happy memories' Alec Head: a giant of modern racing and father and mentor to more French greats The remarkable facts and figures behind Alec Head's achievements in racing Hollie Doyle wins 'incredible' first Classic on French Oaks heroine Nashwa