Excitement and drama as Mozu Superflare is awarded thrilling Group 1 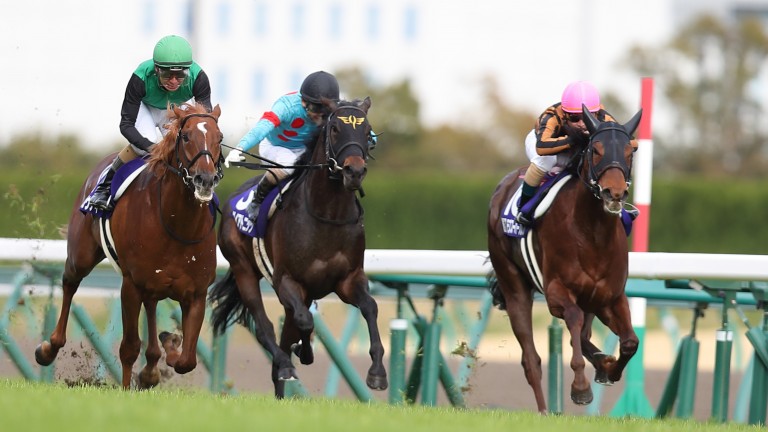 Mozu Superflare (right) was promoted to first in the Takamatsunomiya Kinen
Masakazu Takahashi
1 of 1
By Jonathan Harding UPDATED 11:50AM, MAR 29 2020

British and Irish racing fans have been starved of drama on the track at home but those willing to look further afield were rewarded with a thrilling finish to the Takamatsunomiya Kinen at Chukyo on Sunday.

It was the first top-level race to be held behind closed doors in Japan since the coronavirus outbreak but it nonetheless provided a spectacle with a scintillating finish and a reversal of placings.

Only a neck separated the first four home as Kurino Gaudi passed the post first ahead of Mozu Superflare, Gran Alegria, who came into contention with a powerful late burst, and Diatonic.

However, Kurino Gaudi was demoted to fourth for interference, with Mozu Superflare named the winner after a stewards' inquiry, providing jockey Fuma Matsuwaka with his first Grade 1.

Due to the coronavirus pandemic, the Japan Racing Association (JRA) have held races behind closed doors since the end of February.

Japan has thus far been able to keep its Graded race programme intact and there are a number of big races to look forward to in the coming months, including the Oka Sho and Satsuki Sho, equivalent to the 1,000 and 2,000 Guineas, on April 12 and April 19.

FIRST PUBLISHED 11:27AM, MAR 29 2020
It was the first top-level race to be held behind closed doors in Japan since the coronavirus outbreak