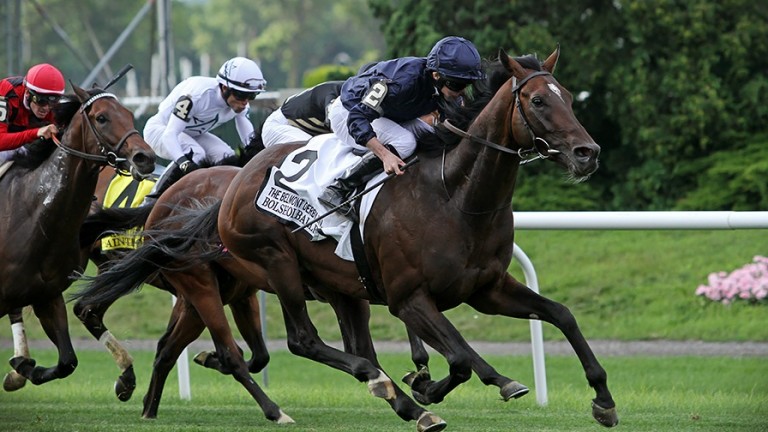 Bolshoi Ballet gains a hard-fought victory in the Belmont Derby under Ryan Moore
1 of 1
By Brian Sheerin and Andrew Dietz UPDATED 2:11PM, JUL 11 2021

Bolshoi Ballet paid a timely tribute to his late sire Galileo by winning the Belmont Derby to complete a big-race Saturday double for Aidan O'Brien and Ryan Moore following Santa Barbara's success in the Belmont Oaks.

On the day the world's greatest sire died at the age of 23, Bolshoi Ballet became Galileo's 92nd top-flight winner with a hard-fought victory in the $1 million contest.

Reported to have suffered a cut to his right-hind leg when disappointing as Derby favourite at Epsom, the Ballysax and Derrinstown winner got back on track with a length-and-a-quarter success over Tokyo Gold, who had prevailed in the Derby Italiano on his last start.

Reflecting on his Belmont double on Sunday, O'Brien was thrilled with Bolshoi Ballet's fitting success but has no definite plans for him.

He said: "We were delighted with Bolshoi Ballet, especially on the day that it was. We were very happy with him. It was a mile and a quarter on nice ground and, for his first time racing in America, he did it very well. He won nicely.

"Where we go next, we're not sure. He's a very good mover so I think nice ground suits him. He's very comfortable at a mile and a quarter.

"He had a break after the Derby and really he was only just ready to start back, so I imagine we'll see how he comes out of it and then pick a race for him."

The contest was not straightforward for Moore, who started to get animated just past the halfway point and was hard at work turning for home in sixth.

However, Bolshoi Ballet, showing a determination instilled in so many of Galileo's offspring, kept on responding and ultimately outstayed his rivals in the closing stages.

"He won comfortably without being able to show how good he is," said Moore. "He's the most beautiful horse you'll see. He's a real athlete, a class horse.

"With a furlong to run, you could see he was just waiting, having a look and his ears were going. He's still getting used to knowing what he has to do. We think there's more to come. Potentially, I suppose he could be a Breeders' Cup Turf horse."

A memorable meeting for Moore, who became the first jockey since Jerry Bailey in 2000 to do the Belmont Derby and Oaks double, and O'Brien started with Santa Barbara.

Like Bolshoi Ballet, she also ran below expectations when sent off favourite for her Classic assignment at Epsom, but she showed a potent turn of foot to surge past Con Lima near the line.

Locked up with nowhere to go on the inner, Moore switched the filly out approaching the final furlong and she took off impressively to score by half a length.

"I just had to sit on her and find a little bit of room at some stage," said Moore.

"We went quite steady and there were a few in front of me. I didn't want to be exposed on the turn and I was hoping a couple would drop away early. But we had to switch around. She's got plenty of class and she quickened. She won very comfortably."

O'Brien has been vocal as to the regards in which he holds Santa Barbara, and highlighted her pace following her Belmont win, her first of the season after running in the 1,000 Guineas, Oaks and Pretty Polly Stakes.

He said: "Santa Barbara has a lot of speed. I suppose we always wondered how far she'd stay because she's very quick and you could see that at Belmont. She quickened up off what was a very slow pace and was impressive.

"Distance-wise, we could stay around a mile and a furlong or a mile and a quarter because she has a lot of speed.

"She has an option of going back to America later in the year, as does Bolshoi Ballet, but we could pick a race for them in between first."

FIRST PUBLISHED 8:18AM, JUL 11 2021
She has an option of going back to America later in the year, as does Bolshoi Ballet, but we could pick a race for them in between first

Dual Leger winner Search For A Song returns to her brilliant best Dettori gets Arc call-up on Love as O'Brien talks up 'class' filly Snowfall Saturday reaction: 'His impressive physique gives hope for next year' 'He's a very impressive individual' - Luxembourg powers into 2022 Derby picture 'I didn't think that would be possible' - O'Brien smitten as Tenebrism soars Watch: no stirrups, no problem as jockey delivers remarkable winning ride