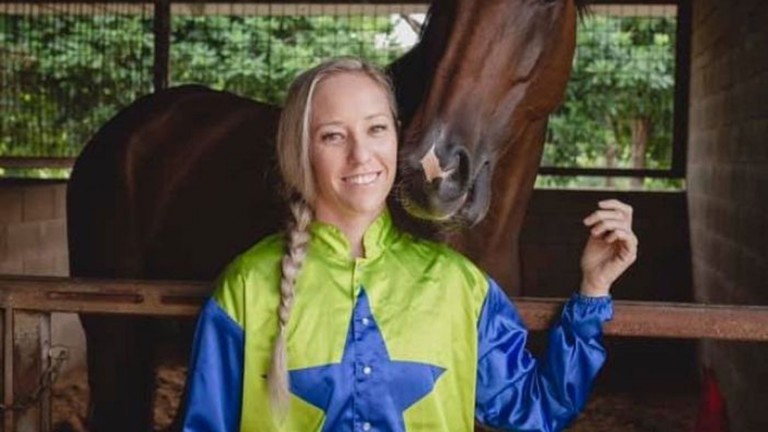 Australian racing was rocked by the second death of a jockey in two days after Melanie Tyndall was killed in a fall at Fannie Bay racecourse in Darwin on Saturday.

The sport was left in shock on Friday morning when apprentice Mikaela Claridge, 22, died after a trackwork accident at Cranbourne racecourse in Melbourne, and more tragedy followed when 32-year-old Tyndall's mount Restless unseated the rider in a 5½f handicap. She was taken to hospital but her injuries proved fatal.

A statement issued by Thoroughbred Racing Northern Territory (TRNT) and the Darwin Turf Club (DTC) read: "During the running of the third race at Fannie Bay today, Melanie's mount Restless appeared to clip the heels of another runner, she became unbalanced and was dislodged near the 300-metre mark. She received immediate medical assistance from the on-course paramedics.

"Melanie was then transported by St John Ambulance to Royal Darwin Hospital where she was afforded further medical care, but despite the best efforts of the professionals at RDH, Melanie passed away."

With an infectious smile, a tremendous will to win & a personality to match, Darwin based rider Melanie Tyndall was admired by her peers & loved by so many. Our team is devastated by her tragic passing. Thoughts to @DarwinTurfClub & the entire NT industry & Mel's family & friends pic.twitter.com/fvdZ8MSVnF

TRNT chief executive Andrew O'Toole added: "On behalf of the Northern Territory racing industry, I would like to extend our thoughts and heartfelt condolences to Melanie's family and friends on her passing.

"Melanie was a much respected member of the Northern Territory racing family and her sad passing will be felt by many within the industry."

DTC chairman Brett Dixon added: "On behalf of the Darwin Turf Club, board and members, we too are deeply saddened by the passing of Melanie, and our sincerest condolences and support is extended to Melanie's family and friends.

"The TRNT, DTC and Australian Jockeys’ Association are working together to support the family, local racing community and industry employees at this very sad time."

Tyndall, who also worked as a police officer, had recorded the 150th success of her career on Princess Leah in the race before her tragic fall.

Leading rider Tommy Berry tweeted: "Can't believe we have lost two beautiful souls in a week. My thoughts and prayers go out to Melanie Tyndall and her family, another sad loss to the industry #RIP."

FIRST PUBLISHED 5:23PM, AUG 31 2019
Melanie was a much respected member of the Northern Territory racing family and her sad passing will be felt by many