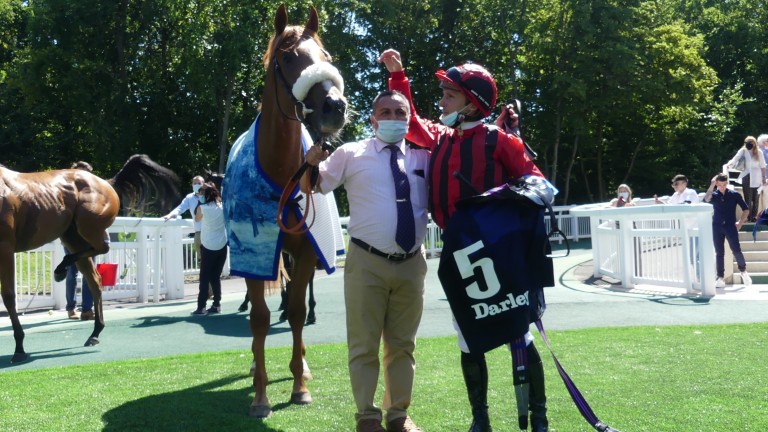 Atomic Force posted a Racing Post Rating when winning at Chantilly four weeks ago which put him on a par with any of the two-year-old winners at Royal Ascot.

The suspicion that the Kevin Ryan-trained gelding might be the quickest of the lot was reinforced with a straightforward repeat in the Group 2 Darley Prix Robert Papin on Sunday, although this time Stephane Pasquier donned the red-and-black-striped silks of new owner, Hong Kong-based Siu Pak Kwan.

"He's just that type of horse, he's very simple to do anything with," said Ryan. "He has a high cruising speed and he can quicken off it. He puts horses in trouble a fair way out and he's done it again today, so I'm delighted for the new connections."

The Darley series culminates in the Group 1 Prix Morny at Deauville and while that is restricted to colts and fillies, Ryan and Siu still have plenty to look forward with the son of Cotai Glory, who won his first two starts for the Hambleton Racing syndicate.

Ryan said: "He'll come home and obviously it limits his opportunities, being a gelding. I'll discuss it with his owners later in the week. We'll let them enjoy the moment for now and make a plan later."

There was two and a half lengths back to Baghed in second for Italian-based Vicenzo Fazio, while the George Boughey-trained Hellomydarlin ran on well to be third after appearing a little cold on leaving the stalls, following a long delay before loading.

Francis Graffard to succeed Royer-Dupre as Aga Khan's principal trainer Prix Foy: local ace Skalleti in pole position as he prepares for Champion Stakes Could York form prove the key to valuable juvenile sales event? Longchamp the place to be again - as it was so memorably in the past Acer Alley sets up Marcel Boussac challenge with convincing Group 3 success Kevin Ryan gunning for more Group 1 glory with Glass Slippers in Flying Five