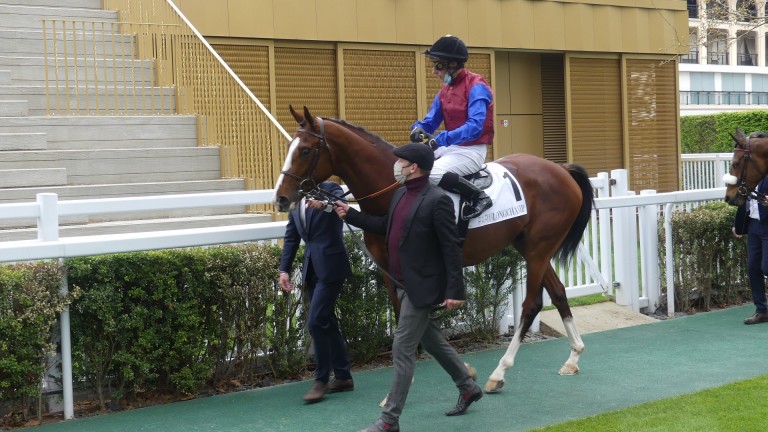 In Swoop: successful at Longchamp on Thursday
Racing Post/Scott Burton
1 of 1
By Jack Haynes UPDATED 5:40PM, MAY 13 2021

Last year’s Arc runner-up In Swoop returned to winning ways with a cosy victory in the Group 3 Prix d’Hedouville at Longchamp on Thursday evening.

The four-year-old, who won the German Derby last season, was ridden for the first time by Olivier Peslier, a late replacement for Pierre-Charles Boudot who has been suspended for the next two days by France Galop in light of being indicted for the rape of a female work-rider.

Nagano Gold made the running in the 1m4f contest, but In Swoop moved strongly into contention, hitting the front inside the final furlong and a half and staying on best to defeat The Good Man.

In Swoop turned recent form around with Sublimis, who beat him in the Prix Lord Seymour last month but could only manage third this time.

In Swoop, trained by Francis-Henri Graffard, is entered in the Coronation Cup at Epsom on June 4, for which he is an unchanged 6-1 with Paddy Power, and the Prince of Wales’s Stakes at Royal Ascot on June 16.

The same firm shortened In Swoop, who also finished second to Mogul in the Grand Prix de Paris last term, to 16-1 (from 25) to go one better in this year's Arc.

FIRST PUBLISHED 5:20PM, MAY 13 2021
In Swoop, trained by Francis-Henri Graffard, is entered in the Coronation Cup at Epsom and the Prince Of Wales?s Stakes at Royal Ascot