Always Dreaming cruises to glory as Thunder Snow is pulled up 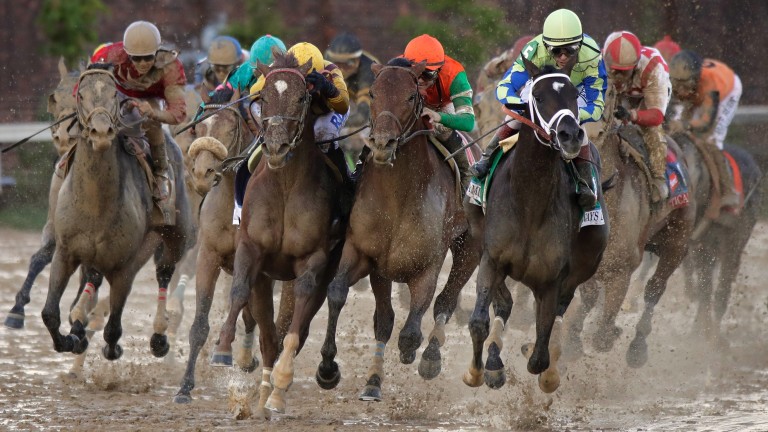 Always Dreaming (right) leads the field into the stretch during the Kentucky Derby
Andy Lyons/Getty Images
1 of 1
By Nicholas Godfrey 11:40AM, MAY 7 2017

As Godolphin's Kentucky Derby dreams dissolved into debacle with Thunder Snow, trainer Todd Pletcher and jockey John Velazquez finally added a mint julep-flavoured frosting to their longstanding association as they teamed up for the umpteenth time to claim the 143rd edition of America's greatest race with convincing winner Always Dreaming.

The fifth straight favourite to win the roses, the Florida Derby victor was always handy as he splashed through the slop in a dominant performance in front of a crowd of 158,070 beneath the iconic Twin Spires at Churchill Downs.

On the other hand, UAE Derby winner Thunder Snow - said to be the Dubai team's best-ever chance of of success by trainer Saeed Bin Suroor - seemed to lose his footing exitingfrom the gate and started bucking. His mount unrideable, Christophe Soumillon had no choice but to pull him up in front of the stands first time around. No injury came to light in an initial veterinary examination.

Long since regarded as one of the most powerful combinations in American racing, Pletcher and Velazquez have teamed up for a multitude of big-race triumphs over the years. They had each won the Derby once before, with Super Saver (2010) and Animal Kingdom (2011) respectively; never, though, had they managed to win in tandem.

"It does mean a lot," said Velazquez, 45. "We've had so much success in the past but we've never won the Derby and he's just an incredible horse. This is the best horse Todd and I have ever come to the Kentucky Derby with. Nothing against all the others, but this was the best horse."

Sneering at Pletcher's overall Derby record of just one previous winner from 45 starters has become an ritual of pre-Derby doings for anyone so minded. After saddling three runners in Saturday's 143rd edition, Pletcher's total number of starters is now 48, equalling the record of his mentor D Wayne Lukas.

More significantly, however, he has now silenced the critics with a second victory in the $2 million contest – and the usually imperturbable trainer admitted he had shed a tear beneath his shades.

"I think it's even more special than the first one," said the multiple champion trainer. "There was a lot of talk about the record but I knew we had a big shot with this horse and I was hoping it would happen. I think this was our 17th Derby – to have two wins, two seconds and I think three thirds, it looked a little better.

"This is so special to win this race with Johnny," added 49-year-old Pletcher. "We have had a great relationship for a long time now, and we have won a lot of races together. This one we hadn't, and this is the one we wanted to win together. We've been together for all these years and this is sweet."

Although the track was hit by torrential rain during the afternoon, the sun deigned to come out just before the off, soon after which Velazquez positioned Always Dreaming in second behind front-runner State Of Honor.

Sent off slightly bigger than a 9-2 chance, Always Dreaming gave the lie to pre-race suggestions that he had been training too aggressively by travelling kindly on the horrible sloppy surface (officially wet-fast).

He took the lead after halfway, with market rival Irish War Cry in close attendance. But whereas Irish War Cry cried enough soon after entering the stretch, Always Dreaming had plenty left, and he never looked like being caught after Velazquez sent him for home.

"I got a good position with him early and then he relaxed," said the jockey. "When we hit the quarter pole, I asked him and he responded. He did it himself from there."

Stopping the clock at 2m03.59s, he won by two and three-quarter lengths from 33-1 longshot Lookin At Lee, who closed from mid-pack, with another outsider Battle Of Midway taking third ahead of well-fancied Classic Empire, who did well considering he got pinched soon after the start. "We got wiped out, at the start," said trainer Mark Casse. "McCraken came and nearly knocked us. Classic Empire really got clobbered."

Always Dreaming, a son of 2012 runner-up Bodemeister, is owned by a six-way partnership. He did not win as a two-year-old when he was trained by Domenick Schettino before being turned over to Pletcher, for whom he won his first race at Tampa Bay in January.

His breakout performance having come with a clear-cut success in the Florida Derby, he has now won four in a row. Always Dreaming will now head to the Preakness Stakes in two weeks' time, where success would set up a Triple Crown bid in the Belmont Stakes in New York, hometown of a number of his syndicate owners, one branch of whom call themselves 'Brooklyn Boyz Stables'.

Of the other fancied horses, Gunnevera was never a factor before a mild rally to finish seventh, one place ahead of McCraken, with Irish War Cry tenth.

Godolphin's Kentucky Derby was over almost as soon as it started as UAE Derby winner bucked dramatically in the first 50 yards and was pulled up passing the stands. "I don't know what happened at the start," said Soumillon.

Bin Suroor added: "Thunder Snow has been checked by vets and appears to be sound. We will closely monitor him over the next 24 hours to ensure that he is okay. Our first priority is his welfare."

FIRST PUBLISHED 12:24AM, MAY 7 2017
There was a lot of talk about the record but I knew we had a big shot with this horse and I was hoping it would happen