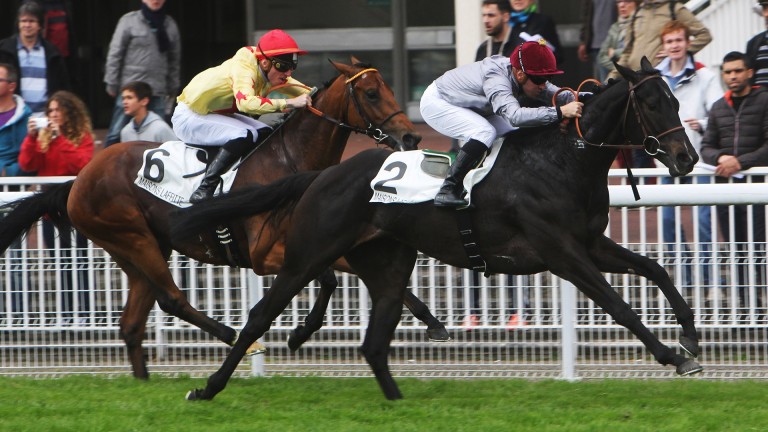 Al Wukair surged into the Qipco 2,000 Guineas picture at Maisons-Laffitte on Monday when coming from a deeply unpromising position under Gregory Benoist to scythe down Group 1 winner National Defense in an electrifying finish.

An ante-post market which had lain dormant under the weight of respect for 5-4 favourite Churchill for much of the winter sparked into life, with Al Wukair - a general 14-1 chance in the morning - now trading at 8-1 with Coral and William Hill, while Betfred were most impressed in cutting the French challenger into 5-1.

And while quiet satisfaction may have been the sentiment expressed by trainer Andre Fabre, almost all present will have come away with the impression they saw a significant piece of the Classic jigsaw slot into place as the son of Dream Ahead took his unbeaten run to three.

"I think it was a useful race and I was delighted by the style in which he won," said Fabre. "Gregory was niggling all the time but when he picked him up he quickened really well. I am happy and the second is a pretty good horse."

With the field towed along by supposed pacemaker Oriental at only a modest pace, National Defense too a keen hold in second while Al Wukair briefly appeared in danger of becoming detached before halfway.

But when Benoist angled his mount to the outside of the runners he powered to the front in the style of a very smart colt.

"I realise that seven furlongs is a bit sharp for him so, with all that put together I am happy and we will go for the Guineas," Fabre added.

The form of Al Wukair's win in the Prix Isonomy had received a timely boost from runner-up Gold Luck in the Prix Vanteaux 24 hours earlier and Al Shaqab representative Rupert Pritchard-Gordon was keen to underline the strength of that race.

"There were eight winners in that race at Deauville and it has worked out really well," said Pritchard-Gordon. "The form of his race at Deauville was very good and we were very hopeful, but of course you never know until they come out again at three."

Criquette Head-Maarek, trainer of National Defense, had expressed a preference for staying in France for the Poule d'Essai des Poulains at Deauville a week after the Guineas, and nothing she saw here will disrupt that plan.

"He ran well and we won’t change anything, we are going to Deauville," said Head-Maarek, whose Classic heroes and heroines have suffered defeat in one of the Maisons-Laffitte trials almost as often as they have come out on top.

"The winner is a very good horse. We were beaten by a better horse today and we have no excuse. He didn’t blow too hard afterwards but no doubt the race will bring him on. I think he’ll be better back up to a mile."

Fabre completed a clean sweep of the three stakes races on the card, with Via Ravenna landing the Prix Imprudence and Ultra returning to the winners' enclosure in the Listed Prix Charles Laffitte - a race in which the Charlie Appleby-trained Bravo Zolo swerved towards the rail at a crucial stage before finishing fourth.

Via Ravenna only made her debut at Chantilly last month and is not entered at Newmarket.

Fabre said: "Via Ravenna will stay in France. Ultra is one of my pet horses and he will run in the Ganay."