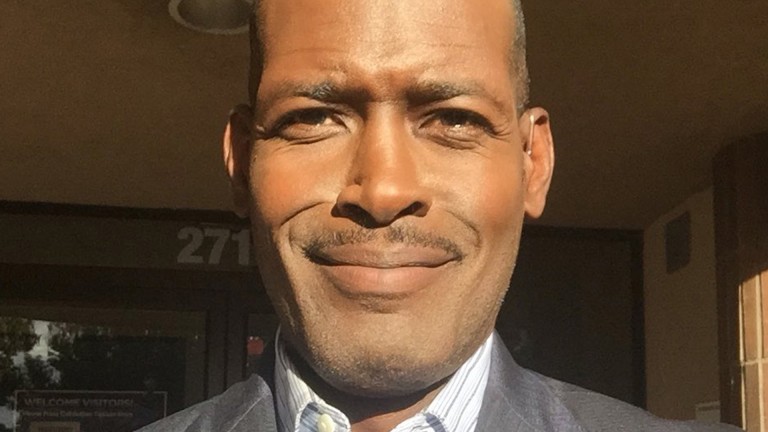 As one of the main anchors on US racing channel TVG, Ken Rudulph had never been considered a tipster as such, indeed by his own admission he was just "the TV guy".

That all changed on May 7, 2005, when Rudulph made a compelling case for supporting rank outsider Giacomo in that afternoon's Kentucky Derby.

His colleagues on air could barely hide their surprise but Rudulph was convinced he had this one right thanks to a helping hand from legendary jockey Mike Smith as well as his own intuition.

Viewers left TVG in the moments before the big race to watch the action live on NBC but the producers kept the cameras rolling on Rudulph and his on-screen cohort.

What those cameras recorded was the perfect, organic reaction to backing what at the time was the second-longest priced winner in the history of the Kentucky Derby at 50-1.

For good measure, 14 years later Rudulph picked the winner that replaced Giacomo on that list in Country House, who won the Derby after Maximum Security was disqualified.

I was five years into my time working in racing and the October before the Derby I was covering racing in California.

Mike Smith says to me that he thinks he's found his Derby horse for the following season, his name was Giacomo. Mike was adamant that I should keep an eye on this horse and that he was going to develop.

I was familiar with his pedigree being by Holy Bull and then he ran in the Hollywood Futurity at just over a mile, which is one of the last two-year-old races of the year.

Giacomo did the same thing he did the first time I saw him race and was just gobbling up the ground late on. He finished second but I thought to myself then that this horse just loved to run and I fell in love with him.

I had heard word from Mike Smith in the days running up to race and he felt that if they had a pace to aim at he would be in the mix.

Once they broke out the gate the reality of what I'd proposed started to sink in. I'd just picked a 50-1 shot in the biggest race of the year, who's only won one race in his whole life and was going to be dead last coming out the gate.

I just kind of checked out of watching him during the race and then my colleague next to me, Simon, starts shouting "Giacomo". All of sudden I saw his silks in the middle of a crowd of horses and it became that while all the others were getting tired he was just getting started.

That moment just pulled me right back in and I just watched him pull to the outside. He had so much momentum and from that point I knew he was going to win.

I knew we were on camera so the thing I wanted to do was to try and remain as calm as possible. I was still there to do my job and the producer told us they were still rolling so we shouldn't cuss.

There's just so much about that moment that I thought was just so beautiful. You just see the raw emotion coming out of me, the desire in my face as I realise that my dream is coming true.

The celebrations that come from that moment on come from the frustration of being called a dummy every day for not knowing what I was doing. 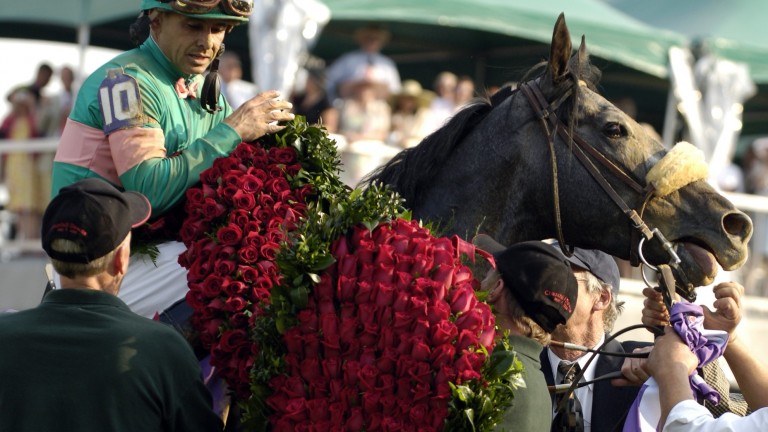 We also had loads of people coming at me because I was the only black person on racing television. I was accused of being an affirmative-action hire and that was only in the job to fill quotas.

From that point on the rest of the broadcast was great. I was relaxed, I knew I'd won some money and I was having a good time.

The money was certainly put to good use. I still live with my family in the condo that we bought shortly after that big win. I must add that I didn't win enough to buy a condo but it certainly helped with a few bits and pieces around the place.

I actually picked Country House at 65-1 who ended up winning the Derby when Maximum Security got disqualified. I've got nine lives when it comes to betting baby.

We were at Hollywood Park and I just remember I was really sick and any other day I would have not worked but it was Derby day so I knew I just had to try and get through it.

I remember our monitor wasn't the greatest and during the race it was really hard to follow Giacomo because he was a proper closer so he was right out the back. I didn't even think about the horse during the race and then my colleague Simon pointed out he was making a big move.

The minute Simon pointed it out, Ken picked him up and that's when he started to get really excited. He stood up at that point and started cheering him on in the closing stages.

I put my hand up to give him a high five as soon as the horse crossed the line but he was leaving me hanging there for a while. I think I was pretty close to thinking it was too awkward to leave it out there but he finally turned round and acknowledged me. 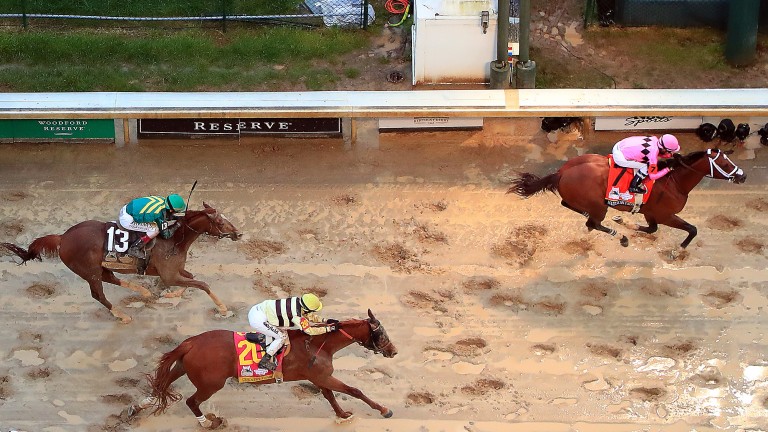 It didn't click for me that we were being recorded so the reaction from me anyway was about as organic as it gets. That made it a lot better.

Ken was just taking it all in for a minute and just thinking "damn it I was right about this horse, I said this was going to happen" and then he let out a scream of excitement.

It's the Derby and you're analysing these horses for weeks so the excitement about finding the winner is just magnified, especially when it's a 50-1 shot.

The way the horse did it only added to the drama of it. To pass that many horses was amazing and it's the same reason so many people loved Zenyatta because it was her style to get up right on the wire.

I think being right with a horse like that was even more rewarding for him than the money he won.

We're still talking about that moment in 2021 and that's because it was the Derby winner he picked, not an outsider in an allowance race at Belmont Park on a Friday.

FIRST PUBLISHED 9:30AM, FEB 19 2021
The celebrations that come from that moment on come from the frustration of being called a dummy every day for not knowing what I was doing

'He'll take a lot of beating on nice ground' - who impressed our panel? 'I only went racing as I had a free ticket - and I came away with £1.4 million' 'I'm a very proud public schoolboy - but probably not a typical one' Clare Balding: 'I was in a complete mess - it was really close to the surface' The best racing pictures in Britain and Ireland from January and February 'The clip shouldn't have even gone out as I was only keeping the lads amused'
Bookmaker
Price
E.W. Terms
bet365
Open Account
Ladbrokes
Open Account
William Hill
Open Account
Coral
Open Account
Paddy Power
Open Account
Betfair
Open Account
Sky Bet
Open Account
Sporting
BetVictor
Boylesport
888sport
RaceBets