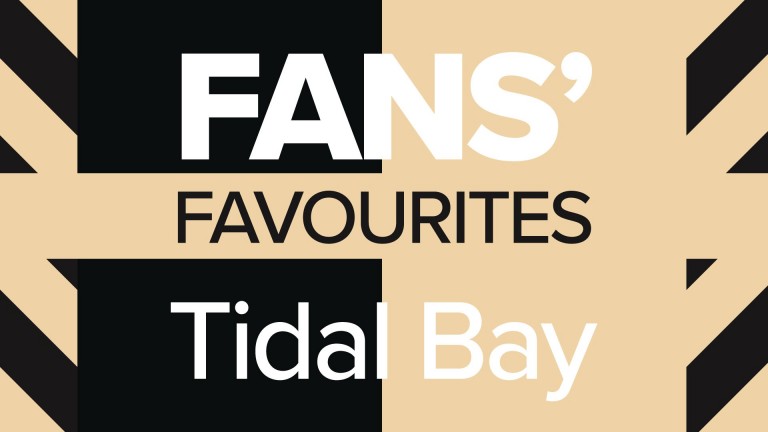 Graham Wylie wasn’t expecting great things from Tidal Bay in the 2012 bet365 Gold Cup. The classy but enigmatic 11-year-old hadn’t won in more than two years, he had top weight of 11st 12lb, the ground was gluey and the testing trip of 3m5f was half a mile further than he had won over before. If not an impossible task, victory seemed improbable.

Under advice from trainer Paul Nicholls, Wylie didn’t go to Sandown. “I just wasn’t sure how he was going to do,” recalls the owner. “Paul said ‘he’s topweight and it’s soft ground, so don’t expect too much’, so I watched it on TV at home.”

What happened that day was wonderfully exhilarating for Wylie and the legion of fans who had grown to love Tidal Bay despite – or quite possibly because of – his quirks and string of big-race near-misses. The ability was there if he decided to use it, and on this occasion he was at his brilliant best.

Ridden from the back of the 19-runner field by Daryl Jacob, Tidal Bay still had more than half the runners ahead of him as they completed the first full circuit, with his white noseband and Wylie’s beige and black colours already caked in mud. This was a test of character in foul conditions, but Tidal Bay did not wilt.

Having moved powerfully into contention over the Railway fences, he sat on the heels of the leading pair going to the Pond fence and from there had only the well-fancied Roalco De Farges to beat. Jacob coolly held his fire until the last before pushing a willing Tidal Bay clear by 15 lengths to a mighty roar from the Sandown crowd.

Back home, Wylie was loving it too. “I remember as he was creeping into the race, I got closer and closer to the television screen, and I couldn’t believe it when he won,” he says. “It was a great race and Daryl gave him a fantastic ride. It was a real boggy day and he just crept and crept and crept. That has to be Tidal Bay’s most impressive win.” 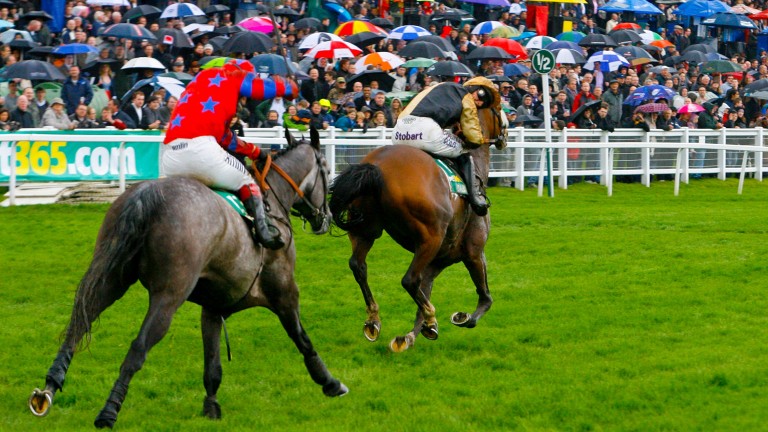 It wasn’t always that way with Tidal Bay, as Wylie admits. “He wasn’t an easy animal to train, to ride, to look after, but on the track he could be brilliant on his day. I don’t think we ever knew what his best distance was, and in the end we just decided he was such an enigmatic horse we’d give him a chance at everything. If he fancied it he’d do it well, but you never knew until the race had finished.”

The notion that Tidal Bay was something of a rogue is dispelled by a 44-race record across nine seasons that saw him earn more than £800,000 in prize-money and finish out of the first three only a dozen times, but the question marks were there almost from the start of his chasing career.

He was a top bumper horse in the spring of 2006, prompting Wylie to spend 300,000gns on him in his big splash as a new high-end jumps owner, and at the end of his first season for Wylie and trainer Howard Johnson he was beaten just a neck in the Ballymore Novices’ Hurdle at the Cheltenham Festival and then won the Mersey Novices’ Hurdle at Aintree.

The rich promise continued with victory in his first three starts over fences the following season and he was Arkle favourite before a narrow defeat as a 1-4 shot at Doncaster on his final run before the festival. That was where the doubts set in.

“Everyone was crabbing his jumping after Doncaster because he had an unusual jumping style with a strange head carriage,” recalls Wylie, who picks out the emphatic answer to the critics in the Arkle as one of his three favourite wins with Tidal Bay. “Howard Johnson put a big white noseband on him for the first time in the Arkle and it made all the difference. He won by 13 lengths and it was great to see the horse prove himself.” 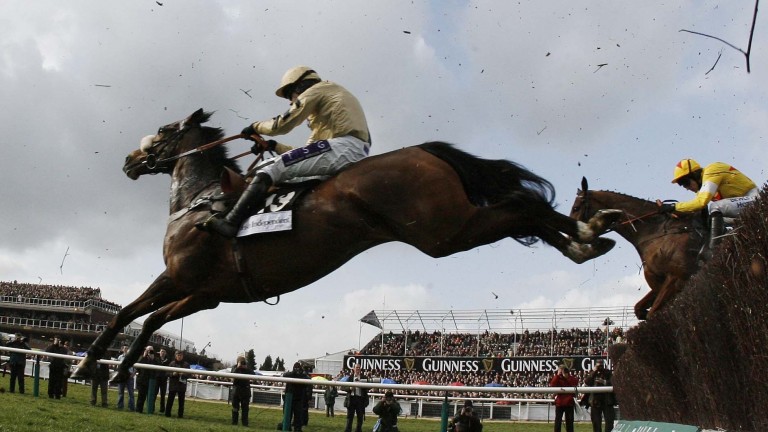 Tidal Bay (Denis O'Regan) flies the last on his way to a 13-length triumph in the 2008 Arkle Chase
Mark Cranham (racingpost.com/photos)

This was the fifth of 13 festival winners for Wylie, who had emerged as a powerful force with a Cheltenham treble in 2005, and the first over fences. “Every owner wants to get a Cheltenham Festival runner, but above all we all want a winner there and he was one of those who did that for me,” says the ever-grateful owner.

Tidal Bay confirmed his class with victory in the Maghull Novices’ Chase the following month, giving him a notable Cheltenham-Aintree double, but the wins soon started to dry up. After a successful return the following season in the Colin Parker Memorial Intermediate Chase at Carlisle, he won just once more in the next three and a half years before that famous Sandown triumph in the bet365 Gold Cup.

That sole success came in the 2010 Cleeve Hurdle in his first switch back to that sphere since his novice days and it was becoming clear that he needed variety in his race programme to keep him interested. 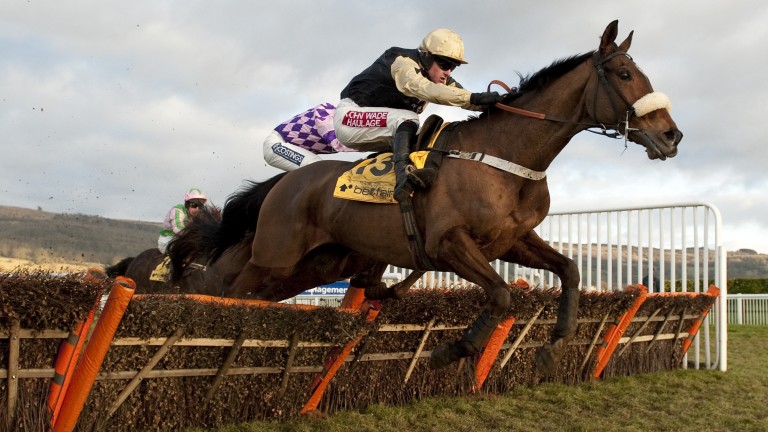 “You had to pick different races and different ways of riding him,” says Wylie. “The key in the end was to vary it up – different tracks, different distances, sometimes hurdles rather than fences – just to keep him interested. If you went to the same track and the same race, he wouldn’t do it the second time.”

Even when he wasn’t winning, there were good performances in a variety of races. His second places included the 2008 Tingle Creek behind Master Minded, the 2009 Old Roan Chase when runner-up to Monet’s Garden, the 2010 Betfair Chase behind Imperial Commander and the 2011 Cotswold Chase when following home Neptune Collonges.

A Racing Post Rating of 170 for his Betfair Chase run was a career best at the age of nine but even better was to come in a glorious final phase following his switch to Nicholls in 2011 after Johnson’s exit from the sport over welfare breaches.

Nicholls had long fancied a go with the quirky character and he loved taking on the challenge. “I always said I wished I’d had him when he was five,” he says. “He seemed to suit our system and did really well for us. He came to us quite late in life and had a breathing op straight away, which turned him around a little bit and gave him a bit of confidence.” 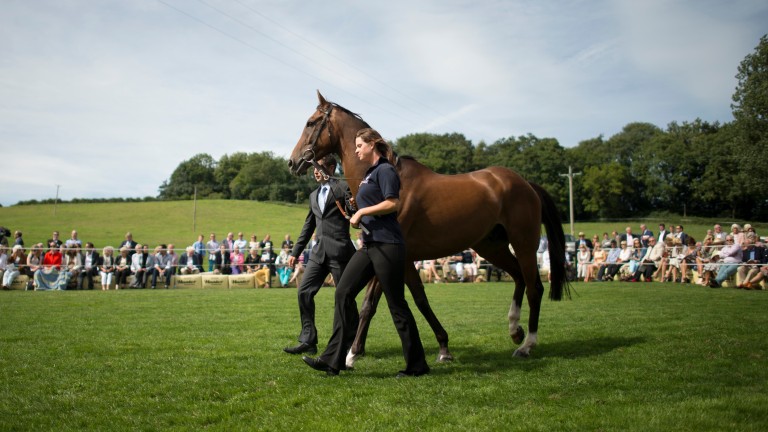 Tidal Bay took some handling at home, however. "Out in the field he was fine but he wasn’t the nicest in the box, he would savage anybody," says Nicholls. "Michelle Kramer used to look after him and it was a challenge for her. She had to be on her guard all the time, but she did a great job with him. She looked after him and herself."

Remarkably, despite arriving at Ditcheat at the age of ten, Tidal Bay produced four of the best five performances of his career on RPR for Nicholls, who adds: "He was an amazingly good horse and he ran some mighty races."

High on the list was the 2012 Lexus Chase when Tidal Bay produced the most amazing finish under Ruby Walsh to triumph in a dramatic four-way battle. Along with the Arkle and the bet365 Gold Cup, this was the third of Wylie’s holy trinity of favourite wins with his mercurial star.

Sixth and pushed along two out, Tidal Bay moved up to fifth off the home turn but was still only fourth jumping the last. Flemenstar, the 5-4 favourite, appeared in control at that point but was soon challenged by First Lieutenant. Nearing the line it looked a two-horse race with Tidal Bay and Sir Des Champs seemingly booked for the minor places until a dramatic late surge took Walsh’s mount between the front pair to snatch victory by a head from First Lieutenant. Flemenstar was half a length behind in third and Sir Des Champs just a short head further back. 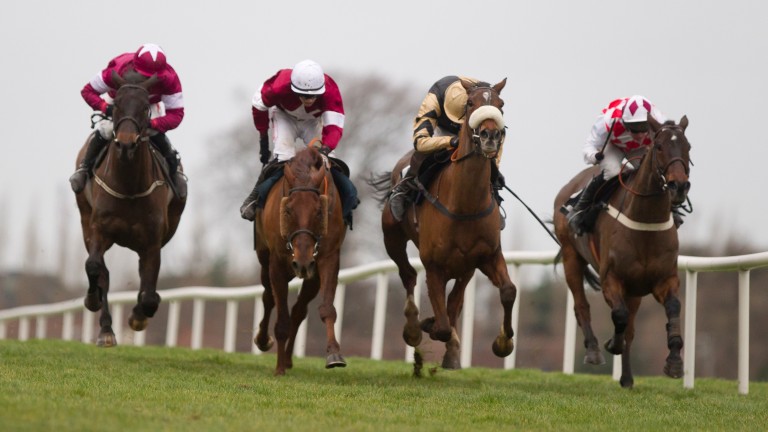 Tidal Bay (second right) wins a race for the ages in the 2012 Lexus Chase at Leopardstown
Patrick McCann (racingpost.com/photos)

This time Wylie was there, with wife Andrea and their children, and the memories remain vivid almost a decade on. “Going to the third-last we thought he had no chance – he was off the bridle, he was miles back – and coming to the last he wasn’t even in camera shot,” he says. “On the run-in he just came from nowhere. I don’t know how he managed to get through them all, but he did, and it was a great ride by Ruby.

“To win that race was unbelievable. It was a great field. The Irish had a huge amount of faith in Flemenstar, and First Lieutenant and Sir Des Champs were two of the best Gigginstown horses. The atmosphere was fantastic and it was an amazing day.” 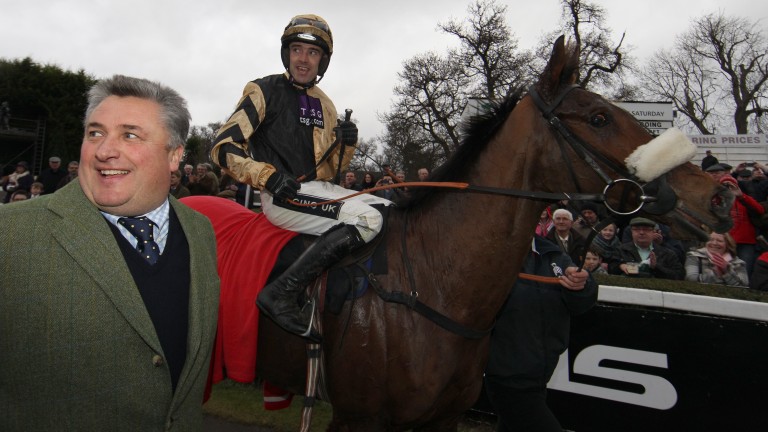 That matched his Sandown performance as Tidal Bay’s best win on RPR, but his top two runs actually came in gallant weight-carrying defeats for Nicholls. The first was four weeks before the Lexus when he was second in the Hennessy at Newbury, beaten three and a quarter lengths when conceding 6lb to subsequent Cheltenham Gold Cup winner Bobs Worth.

He earned an RPR of 174 there and next best was his 172 for finishing third in the 2013 Welsh Grand National under 11st 12lb on heavy ground, beaten only three-quarters of a length by Mountainous off bottom weight of 10st. Later that season, aged 13, he ran another stormer to finish second to Last Instalment in the Irish Hennessy at Leopardstown. 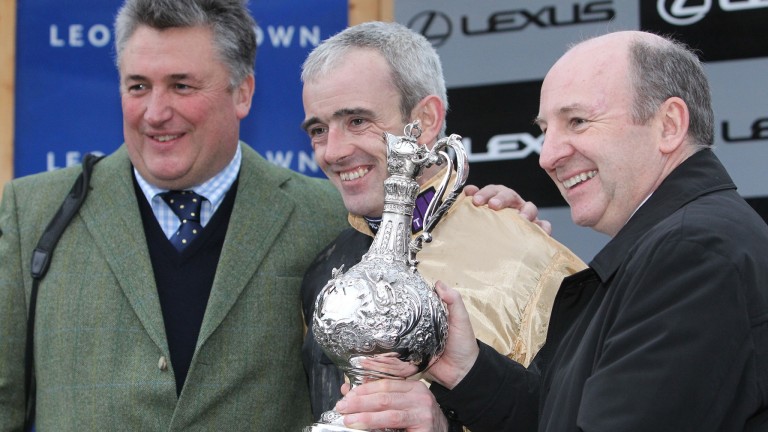 The curtain finally came down a couple of months later after he finished seventh in the Scottish Grand National, and he spent a happy retirement until his death last October at the age of 19. Wylie says: “He went to a good friend of mine and had a great retirement with just three or four horses in the field that he could mess around with.

“He was a joy to own. He’s the kind of horse every National Hunt owner would love to have because he would win the big races, which is what everyone’s looking for, and he also had a long career. I was very lucky to have him.”

Menorah: the much-loved 'matinee idol' who reigned at Sandown

Sprinter Sacre: the perfect racehorse in every way

'I was riding every fence for Trevor' - tears are shed on a magical afternoon 'It's the ability he has' - impressive Ahoy Senor excites emotional Russell Gutsy Aye Right finally has his day to the delight of Graham and Bewley 'He'll be something to be reckoned with' - Roque It impresses on chasing debut Twiston-Davies rides peaks and troughs as family friend brings up 60 for season Denman: 'He could pick you up and chuck you out the box or take your arm off'