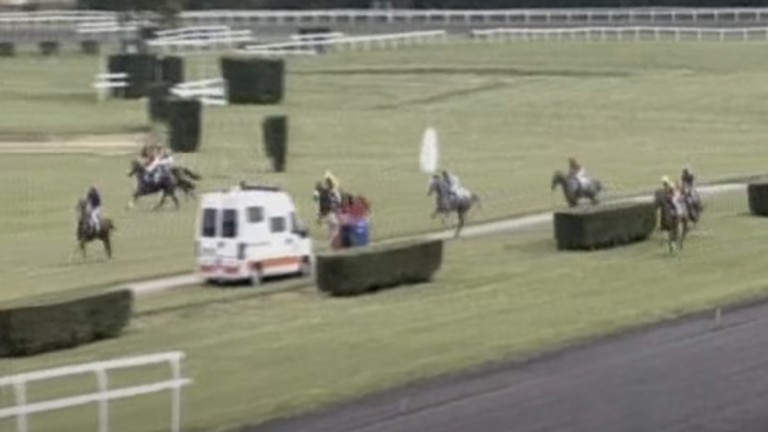 Just the start of the trouble: horses scatter in several directions during the Prix des Benevoles at Castera-Verduzan in July 2014
Equidia
1 of 1
By Scott Burton 9:30AM, FEB 12 2021

The replay has been watched on YouTube nearly a quarter of a million times since July 2014 – quite some number for a clip somewhat obscurely entitled Prix des Benevoles at Castera Verduzan – and it is quite simply one of the most chaotic scenes witnessed on a racecourse in France or anywhere else.

From what momentarily appeared a relatively benign incident at the country track 100 kilometres west of Toulouse, things went awry pretty quickly as Sairastar jinked left to stay inside the running rail, while another of the leaders was lit up to the extent that he bolted off course.

Horses being creatures with a herd instinct (as in some cases are jockeys), three more of the runners followed the well-named Cataclysmic on the wrong path, while two more ran out of their own accord amid general mayhem.

Maxime Le Gaillard aboard Sairastar and Lewis Conan, riding Kitkalino, were the only jockeys to keep their heads and their internal GPS intact and soon had the race to themselves, a fact swiftly picked up by course commentator Isabelle Dupont.

That was not to be the end of the leaders' travails though, as they had to survive the terrifying prospect of two rivals flying directly across their path as they bore down on a fence.

Sairastar won the eventual sprint to the line but in a final twist was disqualified and placed last, Le Gaillard having been adjudged the culprit in the original incident.

Conan – who despite his anglophone name is French and now works as an estate agent – won 42 races in a career of more than 250 starts. But he admits none were quite as strange as the one he and Kitkalino inherited in the stewards' room.

It was all going fine and as we came back towards the stands for the first time, when Maxime was too close to the inside and then made a move back to get round the turn.

There was then a second commotion when several of the guys missed the diagonal back away from the stands and went straight on. Those two incidents coming so close together caused chaos.

You ended up with fallers, horses running loose and, on a track which is not all that big, there were runners all over the place and crossing one another.

When the two horses ran right in front of us, the television didn't lie, they came pretty close, although we had a little bit of time to react. It could have been a much worse incident.

Maxime and I took it easily once we realised we were on our own. Kitkalino was quite nimble and that had enabled us to avoid the trouble early on. We both took a bit of a pull and then he just outsprinted me at the end, only to be disqualified afterwards.

I'd walked the track before racing as usual – I always would at trappy courses like Castera – and I was always sure we'd gone the right way. 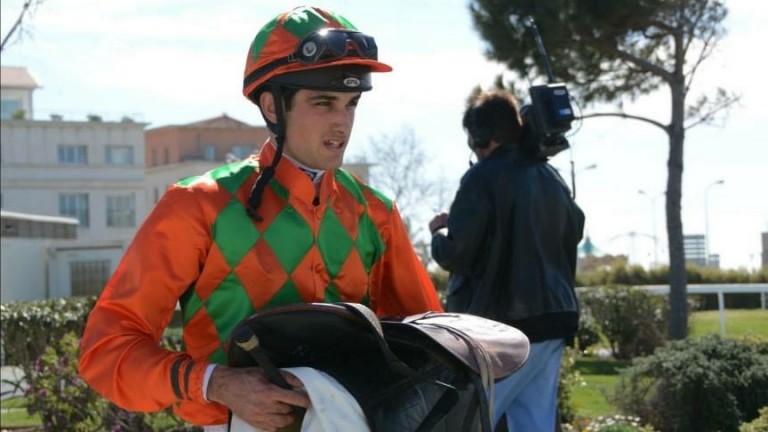 Lewis Conan, one of two jockeys to take the correct course in the most famous race ever run at Castera Verduzan
Lewis Conan

I remember Monsieur [Guillaume] Macaire coming down from the stands at the end of the race and asking me if I was certain of myself because he was completely confused by what he had seen.

I assured him I was totally confident I hadn't made an error.

We were all called in by the stewards and they looked hardest at those horses in front that they judged had caused the initial trouble. Maxime got thrown out because they felt he had caused the first mess.

It was just a manic scene, with runners heading left and right, jockeys falling and loose horses. I had no doubt when the two horses set off on the right course that they were the two to concentrate on.

It was only as time went on that, as the incidents started to pile up,  doubts began to creep in. It was totally mad.

The stewards were next to me and they were trying to work out what was going on. They never considered voiding the race because there were two horses still on the right track and there wasn't the obvious danger of a loose horse running the wrong way round. On top of that everyone was just transfixed.

There were trainers on the track shouting at their jockeys and I can honestly say it's the most bizarre thing I've seen.

When I first started commentating, there was a cross-country race – also at Castera Verduzan – where all four horses fell and the jockeys kept remounting. The rules were different in those days and you had to allow 20 minutes for someone to try to complete the course before you could call a race void. That was a pretty long 20 minutes . . .

It's a shame really, I've commentated at the biggest and the smallest tracks, and I called a Prix de Diane at Chantilly. But it's always the race people ask me about.

FIRST PUBLISHED 9:30AM, FEB 12 2021
I remember Monsieur Macaire coming down from the stands and asking if I was certain of myself because he was completely confused by what he had seen

'I could have been dead quite easily - but I recovered and I'm back again' 'Some days I say I'm going to pack up - but training horses gives me a purpose' 'There's some screaming behind me' - what it's like to win the Galway Hurdle Canford Cliffs: 'He was one of the best racehorses in the last 50 years' Taghrooda: 'She turned towards the stands and everyone was going absolutely mad' Back to normal? We road-test the new raceday experience