Menorah: the much-loved 'matinee idol' who reigned at Sandown 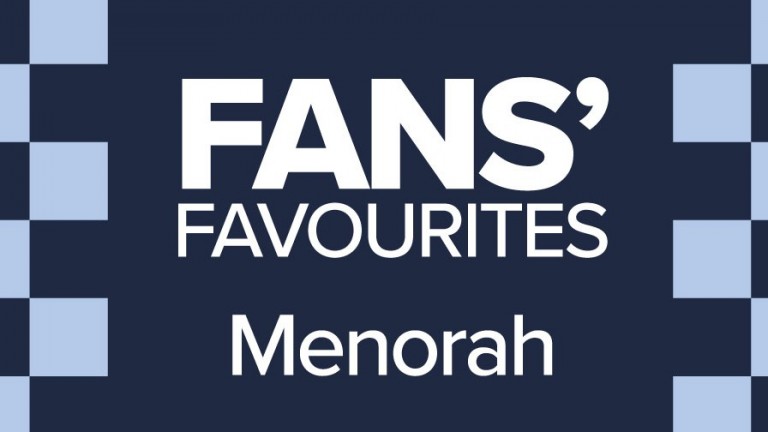 The final day of the jumps season at Sandown is when champions are crowned, but it was Menorah who was king of the Esher track between 2014 and 2017 when winning the first four runnings of the Oaksey Chase.

After a debut bumper success at Naas for Thomas Mullins in 2009, the Whateleys bought Menorah – a son of King’s Theatre – but could not have envisaged the class and durability that he was able to sustain for the following eight seasons.

Grahame Whateley says: “Bloodstock agent Aiden Murphy has bought all our horses and he got on the trail of Menorah after his bumper win in Ireland. You never know with horses as to what you have bought – but you always hope and hope they are going to turn into a superstar.

“It’s never until they finish their careers that you’re able to look back and reflect on how great they were – and Menorah was fabulous. We were so lucky to have him.

“The remarkable thing about Menorah was he was never injured. That’s very rare and he was always up and at it and willing to run. You’re very lucky to get away, even with a top Olympic athlete, to never get injured in your career and it’s exactly the same with a racehorse.” 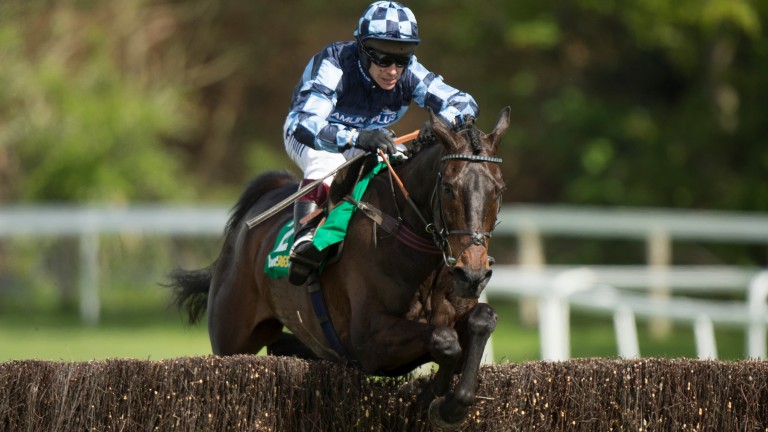 Menorah on his way to another victory at Sandown
Edward Whitaker (racingpost.com/photos)

Reflecting on Menorah’s career with his owners, it is clear his longevity was a standout attribute. Injuries, setbacks and hold-ups are dreaded words that most owners hear during their horses’ careers – but not with Menorah, who was once described as a “matinee idol” for his good looks by a commentator.

Diana Whateley says: “He was in training for eight years and never had a hiccup. It was early days for us as owners back then and we had such success with Menorah, Captain Chris and Wishfull Thinking that we didn’t realise just how much of a purple patch it was at the time.

“It was incredible and terribly exciting, and now we’re always looking for those horses and you realise how special they were with hindsight.”

Having joined Philip Hobbs after his bumper success, Menorah made a successful start to his novice hurdles campaign, winning at Warwick and Kempton and finishing second at Doncaster and Ascot to tee up a crack at the Supreme at the Cheltenham Festival.

A 12-1 shot in the betting, Menorah moved strongly into contention after three out and found plenty for pressure under the customary Richard Johnson drive to defeat Betfair Hurdle winner Get Me Out Of Here by a head.

It was a memorable first Cheltenham Festival success for the Whateleys.

Grahame Whateley reflects: “Our expectations were not that high going into the Supreme and the main thing we’ve learnt from being involved in racing is that if you expect to win it never happens!

“Richard Johnson was terrific in driving him to the line. The excitement and tingling you get in your body from a winner at the Cheltenham Festival is something you can’t really describe.”

Diana Whateley adds: “It was a fantastic day and when you stand in the winner’s enclosure at Cheltenham you wish you could make time stand still. Before you know it, you’re onto the next race as the meeting goes on, but that moment is so special for any owner and you want to prolong and savour it for as long as you can.

“It’s always mindblowing to have a winner at Cheltenham – it’s extraordinary with the crowds and the atmosphere.” 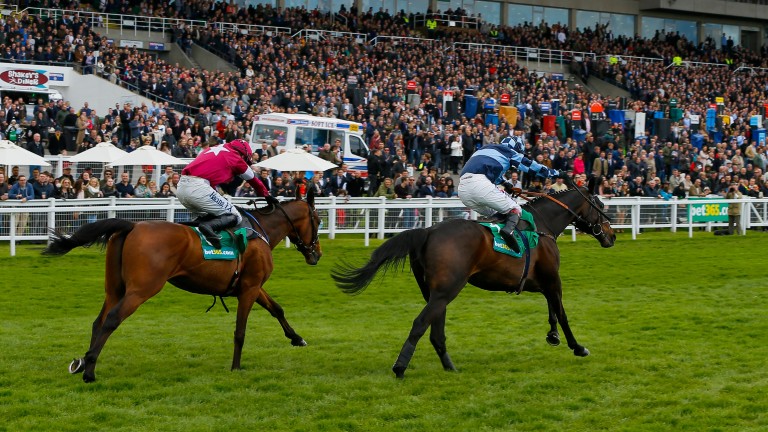 Menorah and Richard Johnson (right) get the better of Valseur Lido in the 2016 Oaksey Chase at Sandown
Mark Cranham (racingpost.com/photos)

A neck second to General Miller in the Top Novices’ Hurdle at Aintree followed, but a return to Cheltenham provided two more big wins in the Greatwood and International Hurdle, in which Cue Card was four and a half lengths back in second and Silviniaco Conti another half-length behind in third.

Those course victories led to a tilt at the Champion Hurdle with Menorah sent off 3-1 second favourite. He finished fifth behind Hurricane Fly, but his owners were already excited about the next season.

Grahame Whateley says: “He won the Supreme, Greatwood and International at Cheltenham but he really wasn’t a hurdler in the true sense of the word. He was a chaser, so to get that benefit of winning those illustrious races before he went on to have a chasing career was the cherry on top of the icing on top of the cream on top of the cake!”

Menorah unseated Johnson on his chasing debut at Exeter in 2011, and after two wins at Taunton and Kempton, he fell in the Lightning Novices’ Chase at Doncaster. His jumping quickly became a point of contention in the press, but Menorah did not fall thereafter.

He competed at all three spring festivals in his novice campaign, placing third in the Arkle at Cheltenham, winning the Manifesto at Aintree and finishing fourth in the Ryanair Novice Chase at Punchestown.

Bar pulling up in the Ryanair Chase, Menorah finished in the first three in five other starts in his second season over fences, including success in the rearranged Peterborough Chase at Kempton and placing second in the Betfred Bowl at Aintree.

Menorah’s next victory came in the first running of the bet365 Oaksey Chase on the final day of the season at Sandown in 2014. It kickstarted a fantastic four consecutive victories in the race, beating Al Ferof the next season, during which he landed the Charlie Hall Chase at Wetherby, and Valseur Lido in 2016.

“We could never have imagined he would win the race four times when he was first successful in 2014. The press were knocking him quite a bit in his early days over fences, saying Menorah couldn’t jump, but when he was on song on the right track and over the right distance, he jumped like a stag! He was fantastic,” says Grahame Whateley.

“Jumping comes to the fore around Sandown and he was one of those horses who came alive in the spring with the sun on his back. Those four days were just magical.”

'My husband was in tears on ITV'

Diana Whateley adds: “His jumping was a bit iffy to start with, but when you go over the Railway fences at Sandown you have to get your stride just right. He perfected that and was a master at it.”

Menorah’s next start after his 2014 Oaksey Chase success came on the Flat at Sandown, with his sole run on the level the following month when ninth under Kieren Fallon in the Group 3 Henry II Stakes, but it was on the jumps course at the track that he excelled.

Connections had decided prior to the race’s fourth running in 2017 that it would be Menorah’s final run before retirement, which made his victory all the more emotional.

That emotion was captured brilliantly by ITV Racing, with Alice Plunkett interviewing a tearful Grahame Whateley on the walk back to the winner’s enclosure after the race. It is worth a Google search if you haven’t seen it.

Diana Whateley says: “My husband was in tears on ITV and we were just utterly euphoric. It was unbelievable and something that we could not have imagined. We were joyful, so proud and it was all so poignant. With him retiring, we were upset in one way too, so it was such a mix of emotions.”

Grahame Whateley reminisces: “We knew before the race we were going to retire him and he had given us everything. We wanted him to retire fit and healthy and there was no point in trying to get any more out of him. It was time for us to give back to him.”

Reflecting on ‘that’ ITV interview, he adds: “It was raw emotion and I still watch the footage now! I get quite embarrassed about it really but it was just mindblowing on the day. The sheer pride and the gratefulness was overwhelming - even talking about it now makes me emotional. It was a magical day.”

The story of Menorah has a wonderful ending as to this day he enjoys life in retirement on Johnson’s farm in Herefordshire. The Whateleys would not have it any other way.

Diana Whateley says: “We’re sent videos of him from Fiona [Richard’s wife] in the river in the summer with the children on his back and he’s splashing like mad with his foreleg. He’s having such a lovely time and it’s heartwarming to know he’s having a very happy retirement.”

Sprinter Sacre: the perfect racehorse in every way

Silver Streak: the grey warrior who had an unconventional route to the top

Might Bite: 'He's a Grade 1 Mad Moose' – and that's his owner speaking!

FIRST PUBLISHED 10:00AM, MAR 31 2021
He was one of those horses who came alive in the spring with the sun on his back. Those four days were just magical