Speredek: the gallant front-runner who wore his heart on his sleeve 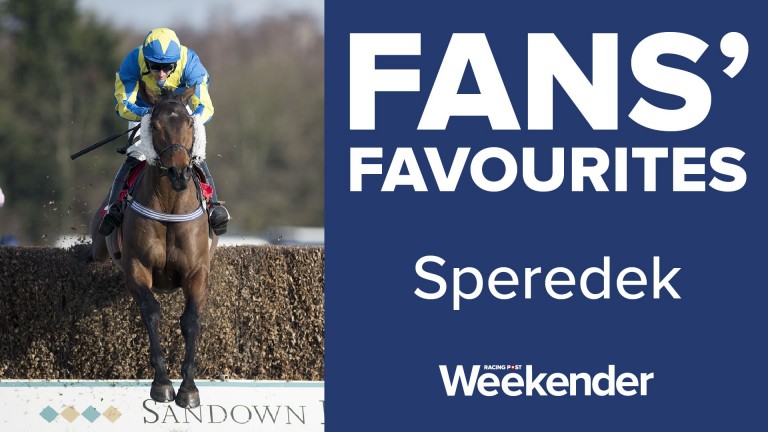 Fans' Favourites is a feature in the Racing Post Weekender in which we talk to those closest to racing's most popular horses and find out why they pluck on our heartstrings. Out every Wednesday

The first Saturday of the year marked the end of a racing career that brought pleasure to many as doughty front-runner Speredek was retired after falling in a handicap chase on Sandown’s Tolworth Hurdle card.

Speredek gave his owners Kapinhand, trainer Nigel Hawke and all involved at his Devon yard quite a scare on his final racecourse outing, exiting the race at the second-last with the screens going up while he was attended to.

For everyone concerned, and many racing fans watching from home, there was a sigh of relief when he walked away unscathed. Hawke had made his mind up there and then that a happy retirement awaited his popular stable stalwart. 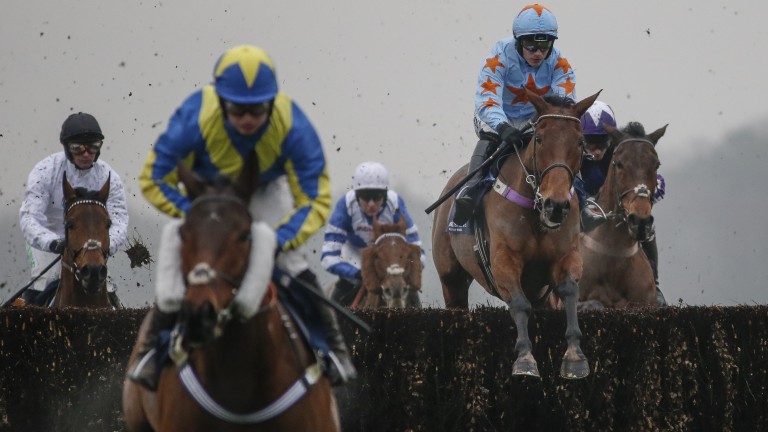 Hawke says: “He’s absolutely fine and there’s no problems with him at all. We bought him as a two-year-old, he’s been a great servant and he’s lived on the flipping edge a long time given the way he raced.

“It was a straightforward decision to retire him as he’d had a great run, won loads of races and been a fantastic servant. He’s been great fun but at some stage you have to say enough is enough and that came at Sandown.”

A liking for progeny of Kapgarde coupled with the imposing frame of a nice horse in time led Hawke to buy Speredek for €5,000 at the sales as a two-year-old. He proved quite a bargain.

Hawke says: “I bought him at Arqana in France and he was a big, ugly horse. He was a beast and by Kapgarde and I had quite a few Kapgardes at the time that had done very well. He was just the type of horse that caught my eye for the right price.

“He was such a big horse that the French trainers weren’t interested as they knew they’d have to give him a bit of time, but that was no problem for us. We gave him plenty of time and he did us proud.”

It was 15 months on that Speredek made his debut in a bumper at nearby Exeter and the betting suggested not too much was expected with Dave Crosse’s mount priced at 66-1.

A highly encouraging third behind Drumlee Sunset and O O Seven proved his price to be an insult, and a six-hour trip to Carlisle on his second start proved more than worthwhile as he justified 2-1 favouritism when trouncing subsequent Long Distance Hurdle winner Beer Goggles by 11 lengths under Tom Scudamore.

Hawke says: “We’d always liked him and hoped he’d run well on debut, but you’ve been there many a time when horses show up well at home and then don’t deliver on the track.

“He proved himself to have ability that day and then he went to Carlisle and absolutely skipped home. That was when we started thinking we had a nice horse.”

Speredek ran with promise when fourth in two novice hurdles, eventually winning a handicap hurdle over 2m7f at Exeter in March 2016, but his chasing career did not start on the best note.

The gung-ho pace pusher pulled up on his first two starts over fences at Hereford and Sandown, but it was feedback from jockey Danny Cook after his run at the Esher track that proved key in his subsequent four-race winning streak. 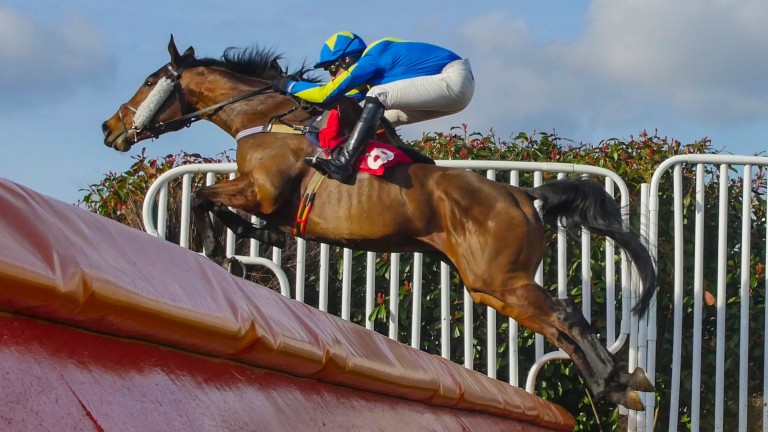 “I’ve got to hand a lot to Danny Cook,” says Hawke. “He won over 2m7f over hurdles at Exeter and we were trying to make him into a three-mile chaser and he just wasn’t one. Danny rode him at Sandown on his second chase start and he led on the home bend but didn’t quite get home over 2m4f.

“He always ran with the choke out, doing a bit too much, and Danny said run him back over two miles and I think he’ll win his next four or five and that’s what he did! He won his races over two miles as in the right conditions he would gallop anything into the ground.

“His running style led to his popularity – he carried his heart on his sleeves. There’s no point fighting a fighter and he was a big, strong horse and loved bowling along from the front.”

While Speredek relished getting on with things on the track, he was a model pupil to deal with at home.

The seven-time winner was looked after by groom Lucie Furlong in recent years, with Hawke describing Speredek as “Lucie’s baby”.

He says: “At home he was an absolute saint. We trained him for eight years and he never missed one day’s work – the only time his training was ever held up was when he had a wind op. He was sound as a pound and if I had 50 or 60 horses like him life would be easy.”

A certain Verdana Blue thwarted Speredek’s five-timer bid in a handicap hurdle at Ascot in November 2017 but a subsequent eight-length demolition job from the front in beating Gino Trail at Sandown teed up a first crack at Grade 1 company.

Speredek’s official rating rose from 115 in February 2017 to 145 11 months later, although he was nevertheless the lowest-rated of the five runners in the Clarence House Chase at Ascot.

Ratings are far from everything though and Hawke’s stable star ran the race of his life in finishing a seven-length second to ten-time top-level winner Un De Sceaux, making everyone involved proud.

Hawke says: “It was a magical season and it was a lifetime ambition for his family of owners to have a horse as good as him. He ran a blinder against Un De Sceaux and that run summed up the horse he was, but I think he was never quite the same thereafter. He ran his heart out that day and we always just struggled with him a little bit since then.

“He was in between two levels really as he was as good a handicapper as there was but he wasn’t quite in the next league up. He ran some big races at many top tracks thereafter, although he always had the issue of having to go right handed as that was his way.”

A trip to Punchestown, second in the Hurst Park Handicap Chase at Ascot and sixth in the Imperial Cup followed, but Hawke has called time on Speredek’s career after trying other angles this term.

He says: “We tried different things this season – we did his wind, tried him over a different trip and tried him going left-handed. It worked to an extent but he wasn’t going to be the horse that he once was and he owes us nothing.

“It does the yard no harm at all to have a good Saturday horse and he was exactly that. I’ll always think the world of him.”

‘He was fun to ride – and scary at times!

It was a joy to watch Speredek put the pedal to the metal in his races, but imagine what it was like to ride him.

That was the privilege of 13 jockeys during his 34-race career with Sean Bowen and Tom Scudamore securing two wins apiece on the forward-going chaser. It was an experience Bowen will never forget.

The jockey says: “He was fun to ride . . . and scary at times!
“When he was at his peak I didn’t have much control of him. He used to go flat out and just keep galloping.

“He was a very good horse – he had his own way of doing it but was very effective at it. You had to just leave him to it and you couldn’t fight him. The only way was his way and that was the way he won races.”

Bowen’s first win on Speredek came at Ludlow, where he whizzed around from the front to dominate a four-runner handicap chase in March 2017.

The second success was at Sandown the following January when Speredek had rare company for the lead in the similarly popular pacesetter Gino Trail. Hawke’s star relished the battle.

Bowen says: “I remember we went very fast. Gino Trail didn’t mess about either and we took each other on. He was brilliant over the Railway fences and ran the others into the ground.”

Speredek recorded a peak Racing Post Rating of 160 in the Clarence House Chase at Ascot on his next start and Bowen describes the runner-up effort behind Un De Sceaux as “brilliant”.

“It was definitely his best run and soft ground and two miles was perfect for him. Un De Sceaux was a very, very special horse so to get as close as we did to him that day was brilliant. It showed just how talented he was when on his A game,” says Bowen.

“It was one of several good days I had on him and it’s great he can now have a good retirement as he deserves it.”

More from this series

Reve De Sivola: the Long Walk king with the heart of a lion