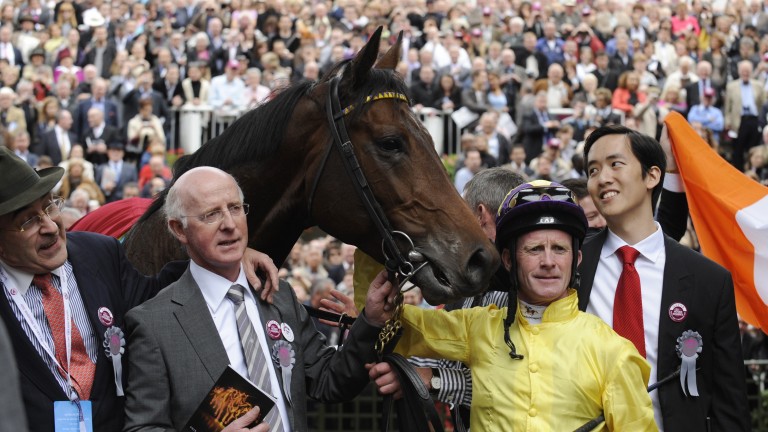 Is there a more fitting name for one of the greatest and most popular racehorses of all time than Sea The Stars? A star he certainly was in that mesmerising season in 2009, and on an October day in Paris everyone wanted to see him for the last time.

This was a racehorse attempting to complete the most staggering of seasons, looking for his sixth Group 1 win and, arguably, facing his toughest test yet in the Prix de l’Arc de Triomphe.

Sea The Stars’ trainer John Oxx felt huge anticipation resting on his shoulders – quite simply the horse could win and join a select group of racing immortals, or he could lose. There was no in between.

“It was extremely anxious for everyone in the build-up,” recalls Oxx, who trains on the Curragh. “We really did not want him to lose. He had to win all of them to be one of the greats, he had to.

“He was in super order at the time, we thought he was getting better and better and his work was beautiful. Mick [Kinane, jockey] said after his last bit of work that he felt better than ever. I suppose we just needed good luck to win.” 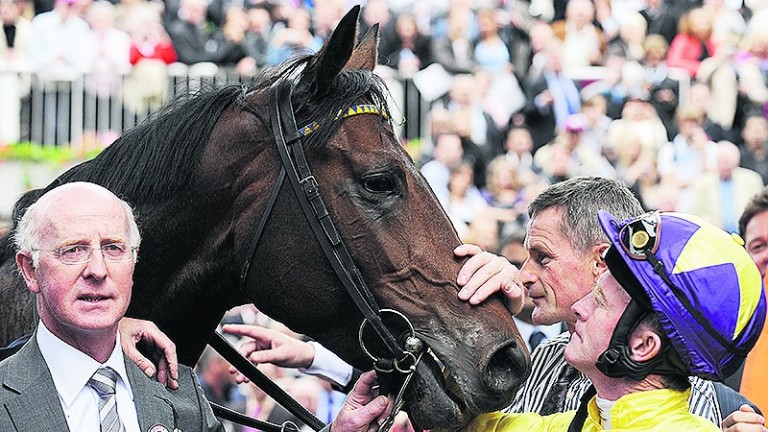 John Oxx: "He was always quiet, he learned everything well"
Edward Whitaker

The many who flooded the Longchamp grandstands were not to be disappointed, in fact Sea The Stars produced a performance even more breathtaking than he had achieved before.

Oxx believed he needed good luck but, as it turned out, he did not. As the runners swung for home Sea The Stars was trapped on the rail, with horses surrounding him and nowhere to go. Time was running out on that famous Longchamp home stretch as Kinane waited for the gap but, in a flash, it appeared.

That was the moment that guaranteed Sea The Stars would enter the history books. He squeezed past his rivals with a blistering turn of foot and galloped all the way to the line to win in easily. From staring at an unlucky defeat he had won, and done it decisively.

“Perfection in equine form – a horse of a lifetime,” was how BBC commentator JA McGrath described the closing stages of the Arc as Sea The Stars powered clear in the final stages. Perfection he certainly was.

Reflecting on Arc day 2009, Kinane says: “When I went into the parade ring I remembered I couldn’t move because it was so busy. Everyone had turned up to see him win and that was the mood. To make that happen was incredible.

“I remember when the gap appeared – that was the first time he really needed an exceptional turn of foot. But he made up the seven lengths in no time and that just goes to show how good he was. It was an extraordinary day.”

Oxx and Kinane had always believed Sea The Stars had something special about him, even from day one. He was a half-brother to Derby winner and stallion powerhouse Galileo, and as a yearling he had the look of a champion. 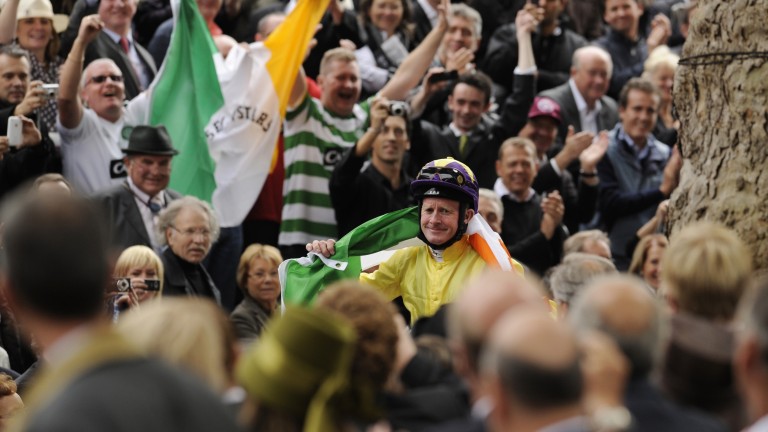 Kinane says: “I remember the first time I saw him. He was a big bay and I said to John, ‘who’s this fella and where did you get him’, and he said ‘Galileo’s brother, never mind about that just get on him and see what you think’.

“He did everything so easily in his work and never disappointed us – he was better at home than he was on the racecourse too!”

“He was a beautiful yearling,” adds Oxx. “He was bought and raised at the Irish National Stud and I’d seen him in September before he came to us, he was good looking from the start. If he had gone to the sales he’d have been top lot, I have no doubt about that.

“He was really easy to deal with. He was always quiet, he learned everything well. He was a gentleman and a beautiful mover as a two-year-old. He was a lovely horse to have in every way. He was straightforward, but as he got older he did get a bit more fresh, and a little bit aggressive. You needed a good rider on him as he was so big and strong – just for the hell of it he’d throw in a jump or a kick just out of exuberance. He was no quiet kids’ ride, you had to keep a lid on him.”

Campaigned with a three-year-old season in mind, the son of Cape Cross raced three times as a juvenile. He finished fourth on his debut – the only defeat of his career – before comfortable wins in a maiden and the Group 2 Beresford Stakes.

His first start at three came in the 2,000 Guineas and was the first time he tackled Group 1 company. No matter. He stamped his authority with a convincing win. Next was the Derby, the day he transformed from a top-class racehorse to something seriously special.

“The Derby was a great day,” adds Oxx. “It was an easy race to watch and I didn’t have too many anxious moments. When I met Mick on the track after he said ‘well that plan A worked out’. We got into a nice position behind a couple of pacemakers, he travelled around like a dream and was still on the bridle a furlong out. It was a perfect race, he won comfortably and he always knew he was winning. He was an intelligent horse, he never exerted himself, so there was plenty more there to come.” 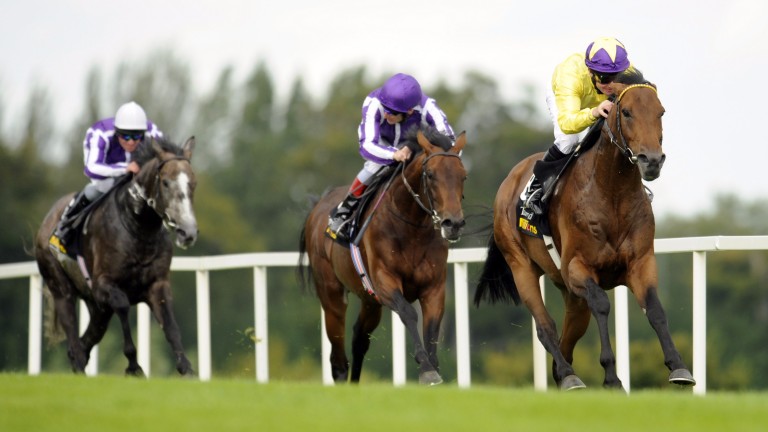 Sea The Stars: set the summer of 2009 alight with a string of Group 1 wins
Edward Whitaker

Oxx was right as Sea The Stars would go on to dominate the middle-distance division, never by wide margins but always with complete control. He captured the Eclipse, Juddmonte International and Irish Champion Stakes in a vintage summer.

By now he was more than a special racehorse, he had captured the attention of the public, who had fallen in love with him and felt a part of his rapid rise to stardom – an ascent capped in the most magnificent style in the Arc.

“It was great to have a horse like that,” recalls Oxx. “He was a bit like public property because everyone loves them and they get caught up with them. He was everyone’s horse at the time. We had loads of messages, cards and letters. It touches you to see a horse give you so much pleasure and see people get emotionally wrapped up in the whole thing. People get behind him and it’s pretty special, it does make you emotional.”

Oxx has no interest in comparing his career-defining horse with other greats of the sport, and it is clear the memories of such an extraordinary few months over a decade ago continue to resonate with the veteran trainer.

“You don’t get too many like him in 100 years, but he was certainly one of them,” he reflects. “People say it was because he didn’t over-exert himself and that’s why he could win all of those races, but I think he won them because he just had so much energy. He ate lots, he had a lot of exercise and just had this natural exuberance, and that’s why he took it all in.

“In fact, he needed the races. About three weeks before the Arc his work rider said ‘John, he needs another race’.

Roaring Lion: the dazzling champion with the courage to match his speed A Flat season that's been anything but flat - and there's still loads to relish Johnny Murtagh: Oxx was a real gentleman and never once lost his temper with me 'The time is right' - Sea The Stars trainer John Oxx to retire at end of season