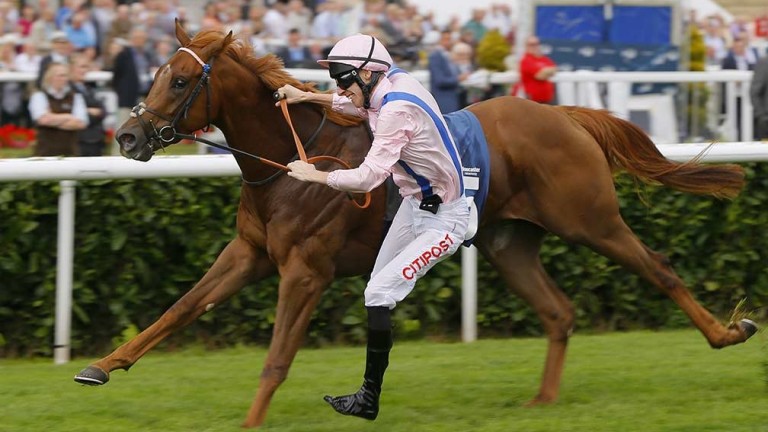 George Baker unseats from Cotai Glory with Flying Childers victory in sight
Mark Cranham (racingpost.com/photos)
1 of 1
By Andrew Dietz 9:02AM, MAY 28 2021

In a new series by the Racing Post, we take a look back at some of the wackiest races ever run, focusing on one of the most dramatic finishes of all time as Cotai Glory snatched defeat from the jaws of victory in the 2014 Flying Childers at Doncaster . . .

Charlie Hills nurtured Battaash and Muhaarar to become two of the best sprinters of all time, but not even they could match Cotai Glory's speed as a juvenile.

The precocious son of Exceed And Excel took a bit of time to learn his trade, getting off the mark at Bath on his third start before finishing second to Limato at Newbury.

His electric pace came to the fore in the Molecomb Stakes when he broke the two-year-old course record at Goodwood, prior to heading to Doncaster for the Flying Childers.

With everything in Cotai Glory's favour, jockey George Baker could not fathom his mount's 6-1 SP in the Flying Childers. Baker might have been surprised but he was going to get a bigger surprise come the end of the race.

In a competitive running of the Group 2, Cotai Glory broke sharply and was soon blazing a trail from the front, showing blistering speed.

He was going to make all in dominant fashion before giving Baker, Hills and his supporters the shock of their lives.

There was no sign of the impending drama as Cotai Glory assumed control a long way out. A pink blur flashed past the furlong marker – still no problem. Half a furlong out and the race was surely over as the fat lady prepared her singing voice. Then in the last 50 yards, like a bolt from the blue, Baker was sent flying.

It came so close to the winning post, the momentum of the unseat almost sent the hapless jockey tumbling across the line. So what happened? To this day Baker and Hills aren't totally sure. What is clear is that Cotai Glory hung badly right, causing the saddle to move and sending Baker out the side door.

The gasps from the crowd could be heard on Doncaster high street and Beacon picked up the pieces to run out one of the luckiest winners ever.

He had so much natural speed and ripped the field apart in the Flying Childers. It was a very strange experience as you went from thinking you were going to win comfortably to the disappointment of what happened. It was a big shame.

We were a good way clear and from a furlong and a half out, I could feel him cocking his jaw to the right. It happened over a prolonged period of time. 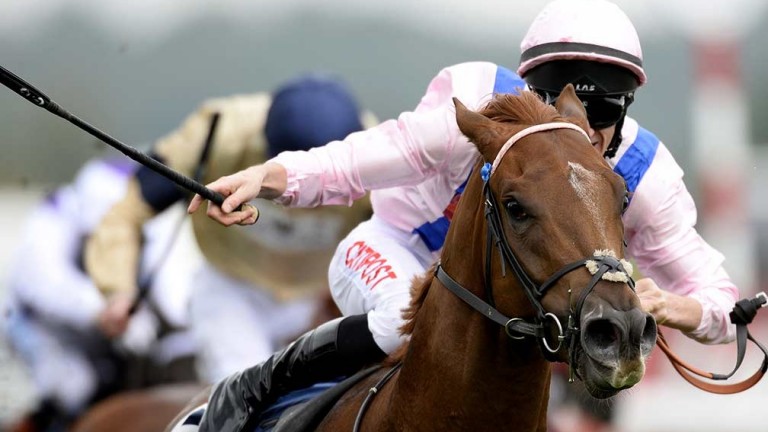 I was fighting to keep him straight and picked up my stick, thinking I could hold him under pressure while keeping him going forward. Unfortunately, my body weight shifted down to my left foot, the tack moved and I lost my balance.

I've watched it back many times and wish I hadn't used my stick and kept both hands on the reins. But we can all be generals after the war.

I got a barrage of abuse on social media and I'm sure if it was now, it would have been even worse.

He was the fastest two-year-old I've trained. I've never known a horse with as much energy as him. I remember watching the Flying Childers from the paddock at Doncaster and as he went past in front of me, I turned away thinking he'd won, which I'll never do again.

I was standing next to Richard Hannon and he said well done and then suddenly I heard the noise of the crowd. Then Richard went and won with Beacon. I'll never forget it – it was extraordinary. 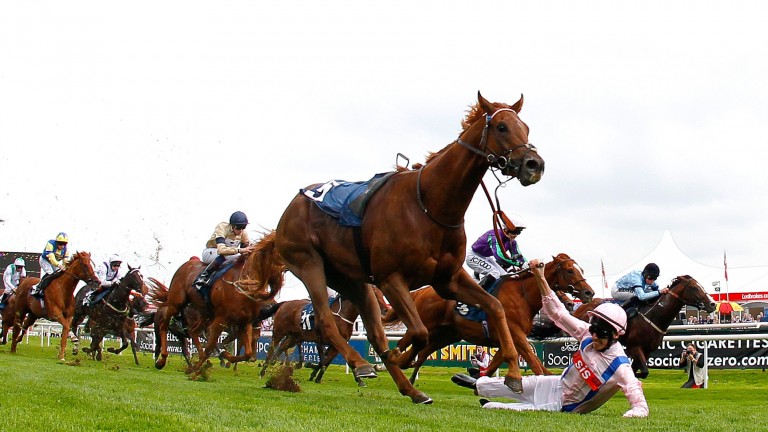 I don't know what caused it, there was no nastiness in the horse and I think he just lost concentration. You just had to take it on the chin.

Redemption for Baker and Cotai Glory came back at Doncaster's St Leger meeting the following year with victory in the Scarbrough Stakes.

As a four-year-old, Cotai Glory went down by just a neck to Profitable in the 2016 King's Stand Stakes on unsuitably soft ground before he ended the campaign with a Group 3 success at Newbury.

He raced on at five without any further success before retiring to stand at Tally Ho Stud in Ireland, where he has made a promising start to his new career.

Secretariat: 'He was something else - I'm still waiting to see one as good' How Jeffrey Bernard left Victor Chandler mortified in front of the Queen Mother The day the Queen Mother stood closer than planned to a fractious horse 'I was dreading every step, every stride, and always thinking the worst' Lady Bowthorpe: 'Even on Newmarket Heath, people know who she is' 'It was a split-second reaction' - Al Boum Photo stuns everyone at Punchestown